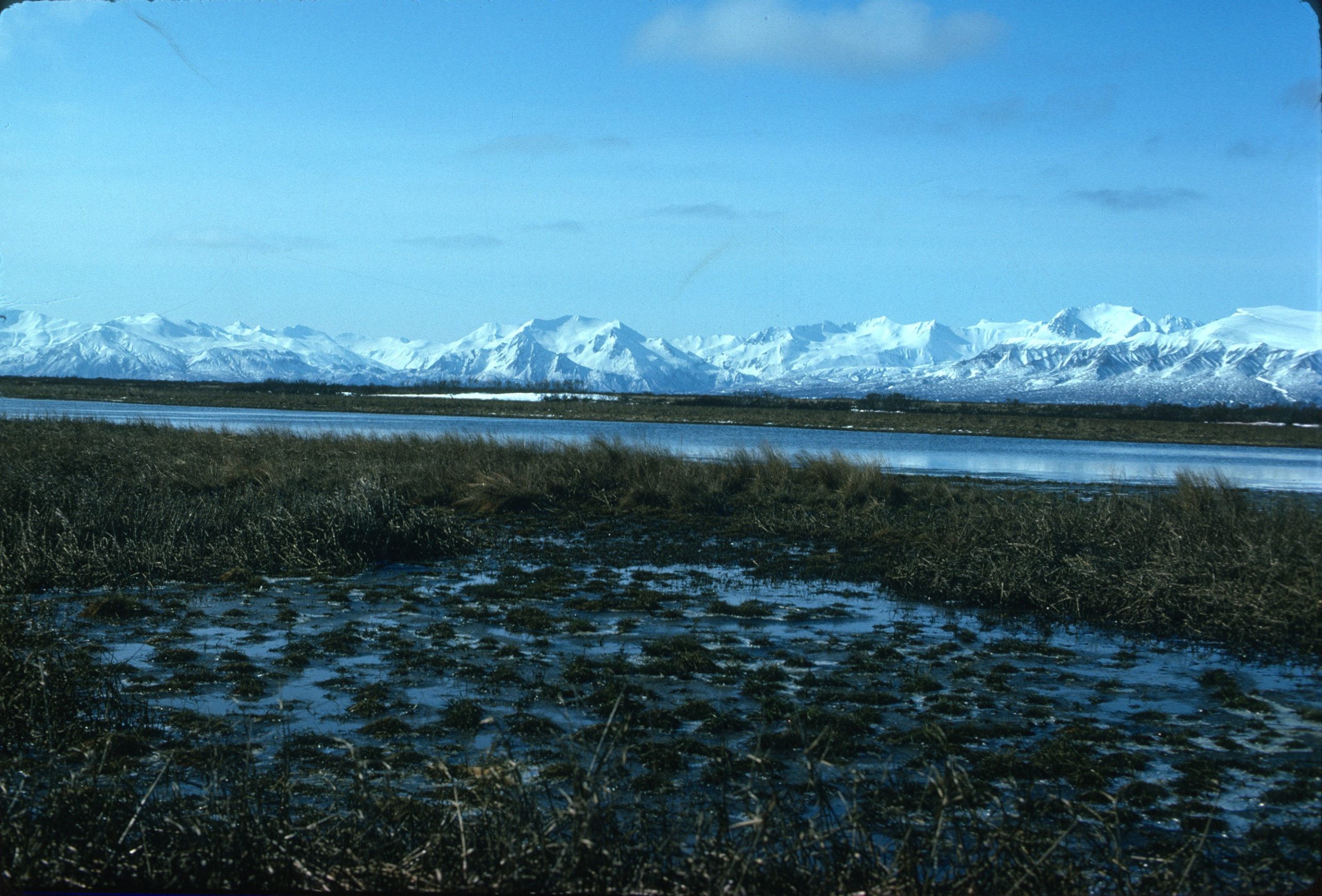 The Biden Administration, with the apparent support of Secretary of Interior Deb Haaland, has sided with Alaskan Natives and the previous Trump Administration to approve the construction of a road through the designated wilderness of Alaska’s Izembek National Wildlife Refuge.

The Department of Justice filed a brief with the 9th Circuit Court of Appeals opposing a legal petition from environmental groups who say that the land swap that would allow the road construction to move forward is illegal. The swap was approved by Trump’s Secretary of Interior, David Bernhardt.

The decision, if upheld, poses a serious threat to all the lands protected by the historic 1980 Alaska National Interest Lands Conservation Act (ANILCA) that, among other things, created many new national parks and wildlife refuges in the state. Many of these newly protected lands, like Izembek, have an overlay of wilderness, which among other things, prohibits roads and motorized access.

Other Alaskan native groups support the land exchange, likely because they believe they could use the precedent to further their own economic interests.

For instance, the proposed land exchange is supported by NANA Corporation, which represents native people in Northwest Alaska, and is currently trying to obtain permission to build a 211-mile road across the southern Brooks Range, including through the Gates of the Arctic National Park, to its mining claims in the Ambler Mining District. NANA filed a brief prepared by Lewis and Clark Law School’s Western Resource Law Center to support the land exchange.

In their brief, NANA Corporation says: “The ‘economic and social needs’ to be furthered by ANILCA, including by ANILCA land exchanges, are broad in scope.[34] This purpose is consistent with what this Court recognized as the most significant purpose of the ANILCA land grants: ANCSA’s legislative history makes clear that Congress contemplated that land granted under ANCSA would be put primarily to three uses –village expansion, subsistence, and capital for economic development. Of these potential uses, Congress clearly expected economic development would be the most significant. . .”

“[W]e have no doubt that Congress intended, at least, that those Native corporations that did select land for its economic potential would be to able to develop that land and to realize that potential.[35]”

Of course, this distorts the main theme of the Alaska National Interest Lands Conservation Act, which makes conservation the primary purpose of the legislation.

Some environmentalists suggest that giving the Secretary of Interior discretion to trade public lands away could lead to the privatization of millions of acres of Alaskan conservation lands and national parks.

The Aleut people living in the village of King Cove claim they need the road for medical emergencies so that injured people can readily access an all-weather runway in nearby Cold Bay, a former military base.

Currently, access to Cold Bay’s runway is by boat or from a smaller airstrip in King Cove. But in stormy weather, travel by any means, including by road, is often dangerous and difficult. This situation is by no means unique to King Cove. Many Alaskan villages are far from hospitals and infrastructure that many Americans take for granted.

However, many wilderness advocates believe the real reason for the road is to carry fish captured by the commercial fishing fleet in King Cove to planes in Cold Bay for rapid shipment to markets.

Izembek Refuge is of international significance. Izembek is recognized as a Wetland of International Importance, and Izembek lagoons are also considered an Important Bird Area (IBA) of global significance. The eel grass beds found in the 315,000-acre refuge provide a major “fuel” stop for migratory waterfowl. Some 98% of the world’s black brant utilize the Izembek lagoons during the year. The refuge is also home to brown bear, wolves, caribou, and moose. 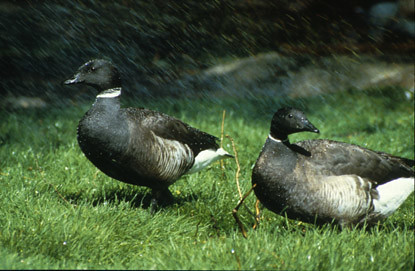 The local politicians have tried to frame opposition to the road as a humanitarian and racial issue. Writing in the Anchorage Times, Henry Mack, the mayor of King Cove, Stanley Mack, the mayor of Aleutian East Borough, and Della Trumble, a member of the King Cove Corporation and Agdaagux Tribal Council, suggest that opponents put wildlife ahead of humans.  The editorial criticized former Secretary of Interior Bruce Babbitt and former Fish and Wildlife Service Director Jamie Clark, saying “It’s easy for highly paid former federal officials like Bruce Babbitt and Jamie Clark to pretend that the lives of nearly 1,000 indigenous Aleuts in King Cove, Alaska don’t really matter.”

In a review of the environmental impacts of the proposed road, the U.S. Fish and Wildlife Service concluded that the road would “degrade irreplaceable ecological resources.” The agency concluded that “The Service has determined that increased acreage would not compensate for the overall values of the existing Izembek Refuge lands and Wilderness that would be removed. Nor would the offered lands compensate for the anticipated impacts that the proposed road would have on wildlife and the habitat surrounding the road corridor.”

In 2013, Secretary of Interior Sally Jewell decided to preclude road construction, protecting the wildlife and wilderness values of the area.

Jewell found that “Increased human traffic and noise, changed hydrology of the wetlands, pollution runoff, and introduced contaminants and invasive species would despoil the isthmus.”  She further concluded there were other modes of transportation available to address emergency medical transportation and pledged to work to implement them.

However, the Trump Administration, under the Secretary of Interior Bernhardt, approved a land exchange between the Aleut natives of King Cove and the Department of Interior that would permit the road construction to proceed.

In May of this year, former President Jimmy Carter filed an Amicus Curaie brief in support of continued wilderness designation and refuge protection. Carter, who in 1980 signed the ANILCA into law, argues that allowing a road to be constructed across the Izembek NWR Wilderness could “undercut” the purposes of the Act and set a dangerous precedent that could threaten Wilderness and conservation lands across the country.

Carter characterized the Court’s decision as “not only deeply mistaken; it is also dangerous.”

Carter, who helped to negotiate the terms of ANILCA, says the Secretary of Interior has no authority to exchange lands to facilitate private development. He claims the ANILCA only permits land trades when it furthers the purposes of the Act.

Clearly, harming wildlife and wilderness values does not further the original conservation purposes of ANILCA. 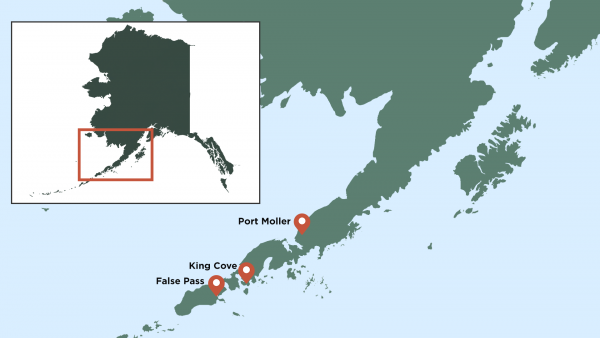 Some opponents of the road allege the proposed road has more to do with economic opportunities than medical emergencies. The original justification for the road was more pecuniary. In 1994, King Cove passed a resolution saying the road would “link together two communities having one of the State’s premier fishing ports/harbors (including North America’s largest salmon cannery) in King Cove with one of the State’s premier airports at Cold Bay.”

The Peter Pan Processing plant in King Cove is Alaska’s biggest salmon and seafood processing operation. The route would make getting workers in and out of King Cove easier.  But it would also reduce costs for shipping fish. Currently, Peter Pan must load fish on a boat and transport it by sea to Cold Bay, where it is loaded on another truck to be transported to the airstrip.

But twenty years later, the justification was changed to the medical emergency rationale.

The agreement between the federal government and local community explicitly says: “The road shall be used primarily for health, safety, and quality of life purposes (including access to and from the Cod Bay Airport) and generally for non-commercial purposes. The commercial transport of fish and seafood products, except by an individual or small business on any road portion shall be prohibited.”

The term “generally” and “small business” opens a big loophole. Not surprisingly, the local Aleut leaders of King Cove all support road construction. Since they own fishing boats, the mayor of King Cove and five out of six city council members, all considered small business owners, would not be prohibited from using the road to transport fish.

It is important to note that the US Small Business Administration defines a firm engaged in “seafood product preparation and packaging” to be a small business if it has no more than 750 employees. Peter Pan is owned by a Fortune 500 company, Maruha Nichiro Corporation in Japan. The Peter Pan processing plant currently operates with 500 employees. So all Maruha would have to do is spin off as a separate company, and it would qualify as a “small business.”

It’s hard to believe that Secretary Haaland and the Biden Administration Justice Department don’t appreciate the significance of this proposal and the precedent that it may create which could harm all of Alaska’s national interest lands.

Ironically, if this decision is allowed to stand, Secretary Haaland’s legacy may be subverting the greatest conservation Act in the nation’s history.

HOW YOU CAN HELP

I would happily write a letter but Don Young has died and Mary Peltola has yet to take office. Is there an organization within Alaska (or without) that is actively protesting this move? A petition Or letter I could get in on? I haven’t been in AK long and the two environmental organizations I follow (Alaska Wilderness and Southeast Alaska Conservation) are mostly (and rightfully) wrapped up in the disastrous Willow drilling project and protecting Bristol Bay from Pebble Mine. It’s exhausting being a wilderness advocate in AK. It seems everyone wants a piece of this state including Alaskans of every ilk.