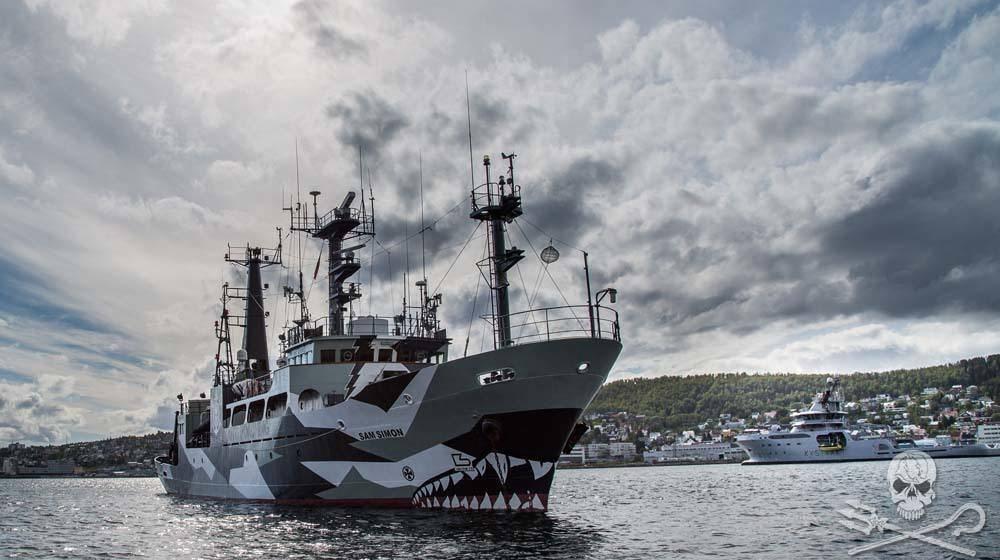 The Dutch-registered Sea Shepherd ship, Sam Simon, has left Norwegian waters, following a short stop in the northern port of Tromsø. Captain Lockhart MacLean of Canada and the crew of the conservation ship were in the northern Scandinavian port to document a shipment of endangered Fin whale meat, which is currently en route to Japan.

The mission, which follows-on from Sea Shepherd’s announcement earlier this year that the organization will increase its presence in the North Atlantic, aims to shine an international spotlight on the illegal shipment of the endangered species.

The Saint Kitts and Nevis-registered cargo vessel, Winter Bay, is carrying 1,700 tonnes of endangered Fin whale meat. The meat has been harvested from endangered whales slaughtered in the North Atlantic by Icelandic whaling company, Hvalur H/F, run by CEO and Chair, Kristján Loftsson.

The Winter Bay, which up until 2014 was Norwegian-owned and operated by the country’s shipping and ferry company, Nor Lines, has been reflagged to a St. Kitts and Nevis flag of convenience.

“We went to Tromsø to investigate and document the shipment of Fin whale meat, which has been caught and traded despite an international ban on both commercial whaling, and commercial trade in whale products,” said Captain MacLean.

“We also found that ownership of the ship carrying that meat, the Winter Bay, has been transferred to a shell company in Tortola British Virgin Islands, and the vessel’s ‘management’ has been outsourced to a Latvian Ship Operator named Aquaship AS,” he continued. “It’s not uncommon for older, ageing ships to be handled in this way, to avoid the cost of maintenance and upgrades.”

On June 28, 24-hours prior to its arrival in port, the Sam Simon notified Norwegian authorities at Bodø of the ship’s intention to enter Norwegian waters and anchor at Tromsø, as required under Norwegian regulations.

At 0725 local time on June 29, the crew of the Sam Simon identified the Norwegian Coast Guard Vessel, NoCGV Harstad, on radar on an intercept course. The Coast Guard vessel continued to escort the Sea Shepherd ship.

At 1525, a Royal Norwegian Air Force Maritime Surveillance Aircraft, RNoAF3296, was spotted overhead by the Sea Shepherd crew. The aircraft then proceeded to fly-over the conservation ship seven times over the next hour, however no radio contact was established.

Authorities in Tromsø, Norway, board the Sam Simon.

The Sam Simon continued in to Tromsø, anchoring at 2336 local time on June 29, the Harstad still drifting alongside. Immediately after anchoring, the conservation ship was boarded by approximately 25 law enforcement officers including coast guard, customs, and police with sniffer dogs.

Norwegian authorities, including police in riot gear, then carried out a full and thorough inspection of the Sam Simon.

Local police kept the crew of conservation ship under watch in the ship’s mess for the duration of the inspection, with the exception of Captain MacLean, Ship Manager Sonja Hyppänen of Finland, Chief Engineer Brian Race of the United States, and Bosun Giacomo Giorgi of Italy, who were all required to assist the authorities with their inspection. The inspection lasted until last coast guard officer left the Sam Simon at 0330 on the morning of June 30.

The authorities remained professional and courteous at all times throughout the inspection, later praising Captain MacLean and the ship’s crew for their cooperation, and on the excellent condition of the ship.

The Sam Simon remained at anchor in Tromsø Harbor for 21 hours, and was in constant and open communication with local authorities at all times. Captain MacLean used the opportunity to open the ship to local media, and to discuss the issue of the endangered Fin whale meat cargo aboard the Winter Bay.

The Sam Simon passes by the Winter Bay, escorted by the Harstad.

Harstad remained in dynamic positioning next to the Sam Simon in Tromsø. It was later joined by Norwegian Coast Guard vessel, NoCGV Andenes, which then followed the Sam Simon until it left Norwegian waters at approximately 1120 local time on July 1.

Captain MacLean has thanked the Norwegian authorities for their professionalism.

“The Norwegian Coast Guard have impressive assets and performed their duties to a high professional standard,” stated Captain MacLean. “Perhaps ageing and substandard vessels such as the Winter Bay, which is flying a flag of convenience and carrying endangered wildlife – akin to elephant ivory or shark fins – could be subjected to the same amount of pressure and scrutiny as we have been. Surely this would be a more valid use of Norwegian taxpayer money.”

Sea Shepherd will continue to watch-over the Winter Bay and its cargo, which are schedule to sail the icy passage between Russia and the North Pole to Japan.

“I don’t think St. Kitts and Nevis are particularly demanding in relation to safety on board these older vessels,” said Captain MacLean. “It would be interesting to see what provisions and recommendations the flag state has made in regards to the Winter Bay’s upcoming Arctic voyage to Japan via the Northern Sea route, considering they are a tiny Caribbean nation, tens of thousands of miles away from the harsh and demanding conditions of the Arctic,” he concluded.