#35 Around the Campfire; Save the Great Arctic Refuge Wilderness! 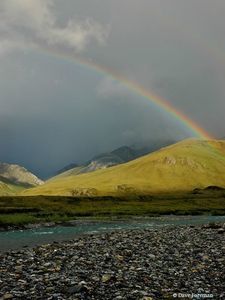 Conservationists know the Arctic Refuge mostly for the 1.5 million-acre Arctic Coastal Plain so coveted for oil and gas industrialization by the energy industry, their eager politicians, and the Alaska growth establishment, along with some of the Inupiat (Eskimo) folks who want development.  The Coastal Plain is yet wilderness, but not designated.  It’s one of the most wonderful places on Earth (I’ve been there and know).  For more than a score of years we’ve fought to keep drilling out and to designate most of the Arctic Plain as Wilderness.

Now the U.S. Fish & Wildlife Service is doing a new Comprehensive Conservation Plan (CCP) for the Refuge and is weighing whether the rest of Refuge should be recommended for Wilderness Area designation.  Right now, the 10 million acres of non-Wilderness Area on the Refuge are managed better as wilderness than most Wilderness Areas.  But without legal designation as Wilderness that could change and development—roads, logging, tourist developments, overhunting and trapping, predator “control” of wolves, and other landscalping—could happen to the Western Brooks Range and Porcupine Plateau.  Indeed, there is organized opposition to more Wilderness, including some development-oriented Native Alaskans.  Because of this, some of the key Alaskan and national conservation groups have shamefully backed down and turned their backs on the great wilderness of the Arctic Refuge except for the Coastal Plain.

Wilderness Watch has a comprehensive, succinct alert on the Arctic Refuge Plan and Wilderness Recommendation.  Instead of doing our own, The Rewilding Institute endorses the Wilderness Watch call to action.  We reprint key parts of it below.  Most of all, though, get an email in right away backing Alternative E—Wilderness recommendation for all qualifying lands in the Arctic National Wildlife Refuge.  That recommends 11 million acres to be added to an 8-million-acre Wilderness Area for a grand total of a single 19-million-acre Arctic National Wildlife Refuge Wilderness Area.  Doing so will be an inspiration to Earth-loving people the world over, and will keep a vast and tangled wilderness as a place for evolution in all its unfathomable mystery to roll on forever.

Read the attachment below and ACT!

I am strongly in favor of Alternative E—Wilderness recommendation for all qualifying lands in the Arctic National Wildlife Refuge. We need wilderness much more than we need more oil.