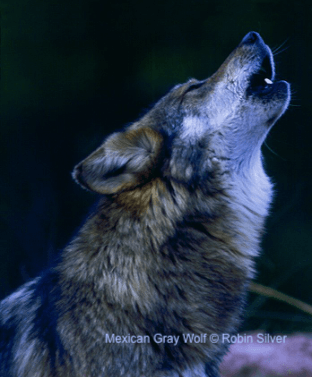 SILVER CITY, N.M.— Leading scientists and wolf conservationists today urged the U.S. Fish and Wildlife Service to adopt an entirely new approach to Mexican gray wolf management in a letter to the agency.

Last year a federal district court in Tucson ordered the Fish and Wildlife Service to rewrite its current wolf-management rules, deciding they were insufficiently protective of genetic diversity and not based on science.

The letter is urging the Service to create new rules that end the killing of wild wolves, greatly reduce live removals, and ensure successful releases of captive wolves.

“It’s time to end wolf management that’s based on bullets and traps,” said Michael Robinson, a conservation advocate at the Center for Biological Diversity. “For two decades the government penalized Mexican wolves for livestock conflicts that could have been prevented. It denied the wild wolf population the captive-born animals it needed for genetic success. We’re hoping for a fresh, humane approach based on science and common sense.”

Today’s letter suggests changes that would reverse ongoing loss of genetic diversity in the wild wolf population. The changes should be included in a “preferred alternative” in the draft environmental impact statement for the rule change and, the letter suggests, should be incorporated into the final rule.

“Time is running out for the critically endangered Mexican wolves,” said retired Fish and Wildlife Service Mexican Wolf Recovery Coordinator David Parsons. “This time the Fish and Wildlife Service must get it right — follow the law, follow the science, and push back on the political interference, which has led to flawed decisions that jeopardize the very existence of the iconic lobos of the Southwest. The wolves know best where to live and what their ecologically effective population size should be.”

“We have long advocated for science-based management of Mexican wolves, including policies that maximize the opportunity for these highly endangered animals to recover in the wildlands of the southwestern United States and northern Mexico,” said Sandy Bahr, chapter director for Sierra Club’s Grand Canyon (Arizona) Chapter. “A rule that increases the release of captive wolf packs into the wild and provides greater protection for the wolves from killing and injury is needed and will help advance their recovery.”

“This is an opportunity for the Fish and Wildlife Service to do right by the lobo and create a path toward actual recovery,” said Chris Smith, southern Rockies wildlife advocate for WildEarth Guardians. “We have put forward the components of a management rule that would protect this at-risk population — hopefully the agency honors its duty.”

Today’s letter also requests that wolves be permitted to roam north of Interstate 40. Additionally, it seeks a halt to wolf removals for livestock losses on public lands if no one was present to protect the stock. The letter’s requested provisions would ban most wolf removals south of Interstate 10 to ensure that wolves in both Mexico and the United States can safely cross the border.

“Successful recovery of Mexican wolves must go hand-in-hand with an understanding and allowance that wolves have the right to exercise their natural behaviors without punishment by removal, injury, or death,” said Jessica Johnson of Animal Protection of New Mexico. “This humane approach is not only necessary to achieve genetic diversity goals but can be successful on our public lands with appropriate precautions and awareness in place.”

Background
Mexican gray wolves are a genetically, morphologically unique subspecies of gray wolf indigenous to Mexico and the southwestern United States. A 20th-century U.S. government program trapped and shot wolves, poisoned them, and destroyed pups in their dens in the United States and Mexico on behalf of the livestock industry. By 1980 only five individual animals were found in Mexico and captured alive. Three were successfully bred, and their descendants were later bred with the descendants of four other wolves caught alive in previous decades, for a total founding population of just seven animals.

Thanks to the protection of the Endangered Species Act, some of their descendants were reintroduced to Arizona and New Mexico beginning in 1998, and 131 wolves were counted there earlier this year. Other wolves were released in Sonora, Mexico in 2011, where approximately 30 now roam.

Click here to read the letter on Mexican wolf management

The Center for Biological Diversity is a national, nonprofit conservation organization with more than 1.6 million members and online activists dedicated to the protection of endangered species and wild places.

Animal Protection of New Mexico’s mission is to advocate the rights of animals by effecting systemic change, resulting in the humane treatment of all animals.

David Parsons is a retired career wildlife biologist with the US Fish and Wildlife Service and served as the first Mexican Wolf Recovery Coordinator from 1990-1999. He is a science advisor to the non-profit carnivore advocacy organization, Project Coyote, and the Carnivore Conservation Biologist for The Rewilding Institute.

The Sierra Club is America’s largest and most influential grassroots environmental organization, with more than 3.5 million members and supporters and 60,000 in the Grand Canyon Chapter. In addition to protecting every person’s right to get outdoors and access the healing power of nature, the Sierra Club works to promote clean energy, safeguard the health of our communities, protect wildlife, and preserve our remaining wild places through grassroots activism, public education, lobbying, and legal action.