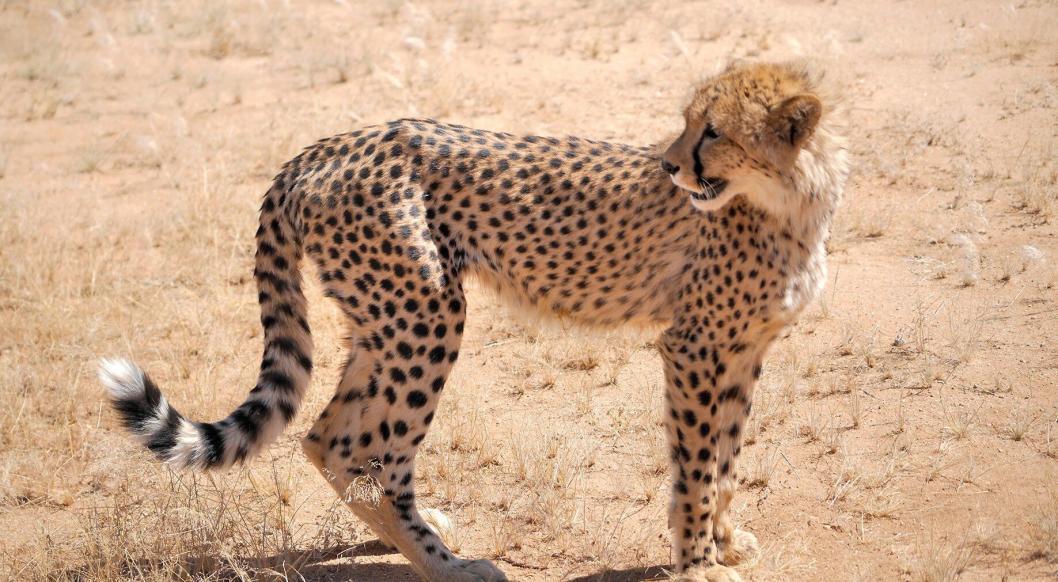 The Solitaire Conservation Fund is a private, Namibian-based Charitable Trust dedicated to landscape-level habitat rehabilitation and the restoration of wildlife migration corridors. In 2008, we began converting distressed cattle farms in Southern Namibia to habitat for wildlife. From this effort, the Solitaire Land Trust (SLT) was created to manage and expand our biodiversity goals. The Solitaire Conservation Fund (SCF), the Charitable component of SLT, receives funding from our Namibian businesses and international donors. So far, we’ve secured and are working to restore wildlife populations on about 45,000 acres of grasslands and savanna. SLT/SCF has the experience and capacity to enlarge the habitat footprint under our care. 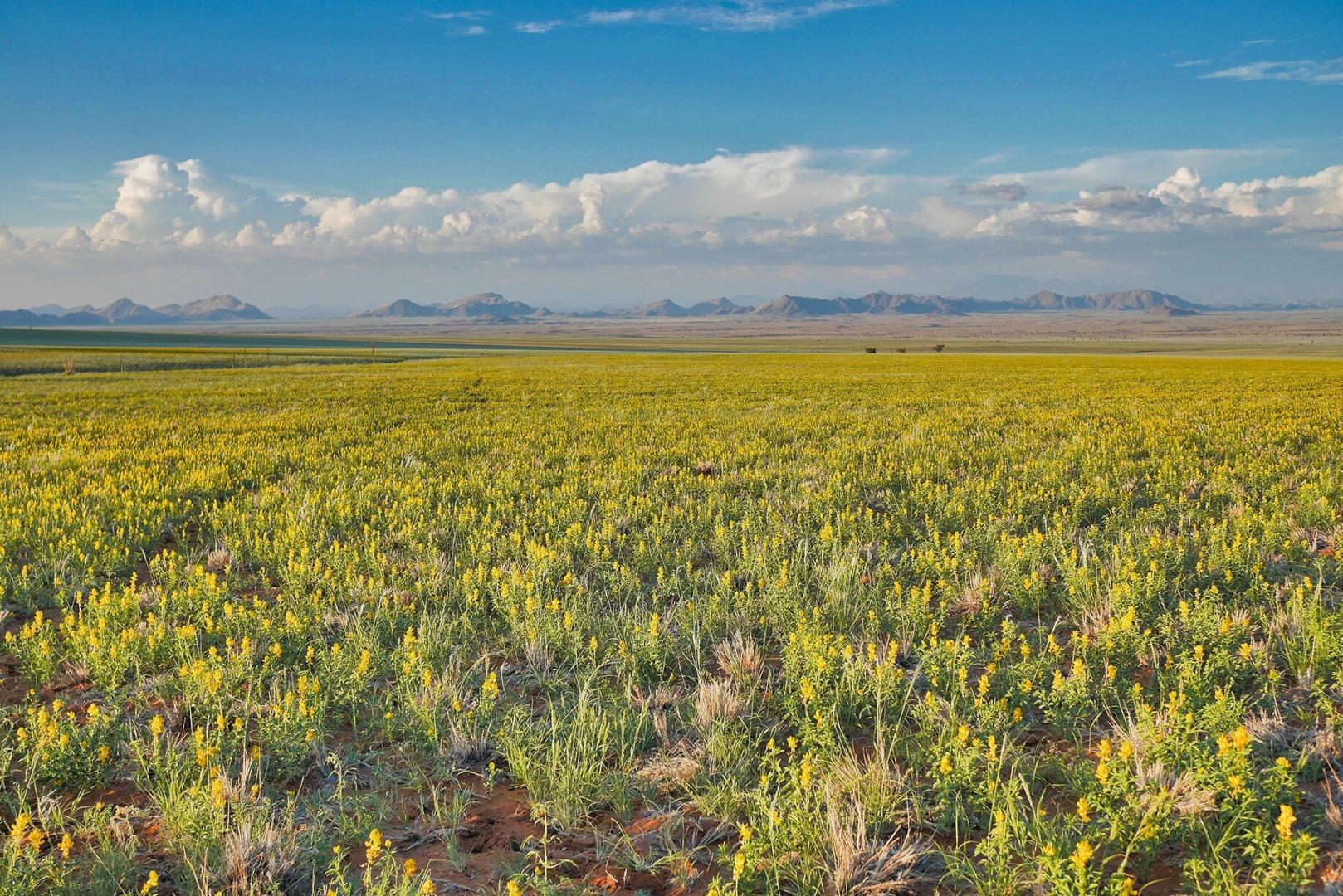 Habitat loss poses the greatest threat to most species on Earth. We believe land acquisition is the best way to revitalise and preserve this strategic ecosystem in Southern Namibia. As climate change intensifies, wildlife will require access to additional sources of water and grazing; locally this means a seasonal eastward movement, and upslope into water drainages and the Great African Escarpment. We are seeking to add habitat on land adjacent to our existing SLT Private Protected Area (PPA). Buying additional land can restore and secure connectivity for wildlife between the Namib-Naukluft National Park (NNNP), our protected grasslands, and the critical watersheds on the eastern section of the project area. These corridors will provide future climate resilience for native flora and fauna.

Healthy, intact grasslands also effectively sequester carbon, and thus should be defended from overgrazing and questionable controlled burning practices. SLT/SCF projects sit in the transition zone between the Namib Desert and the central highland plateau, sometimes referred to as the pre-Namib. Semi-arid grasslands, shrub, savanna woodlands, and rocky escarpment see average annual rainfall of 80-150mm. Rainfall averages, however, don’t take into account the variability of rainfall over time. It’s more useful to look at cycles of rainfall: in the 2010-2011 rainy season, the northern section of our reserve, 18,000 acres, received 450 mm, leading to an abundance of grass, plant, and tree growth. This was followed by more uneven and declining rainfall years; by 2020 the same area received 2 mm of rain the entire year, while a farm to the south got 90 mm in a 3 hour period in December 2020. Record keeping, going back to 19th C. German colonial administrations, suggest this rainfall pattern is normal for the Namib. 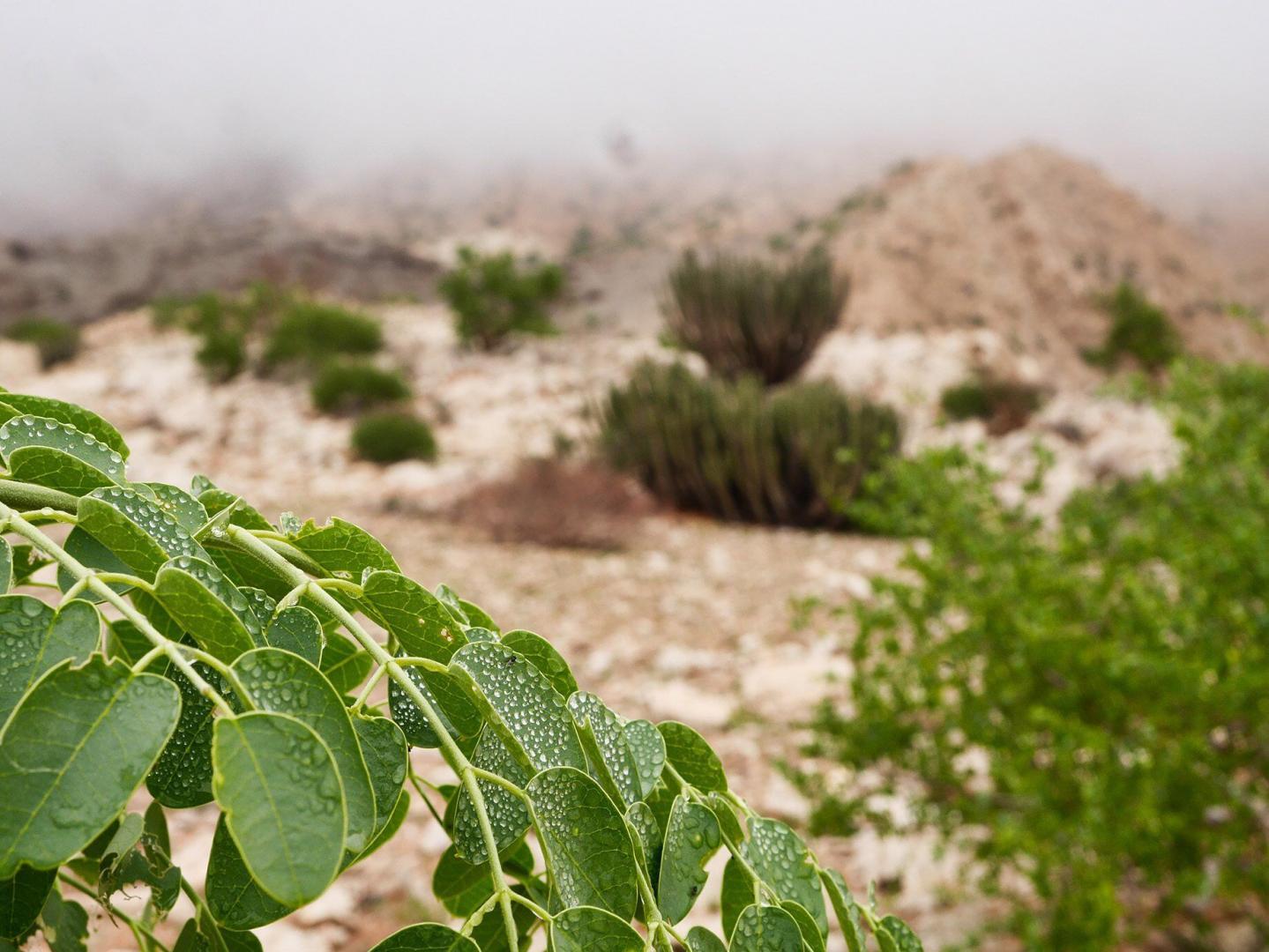 The complex dynamics of hot desert air meeting the cold Atlantic Ocean create fog and low clouds, while preventing the build up of rain-bearing clouds. While technically beyond the coastal fog belt, fog occasionally covers our reserve, blown 150 km east by the prevailing winds. Plants, insects, and reptiles have evolved to capture moisture from fog, from ground condensation created during the large temperature swings between night and day, and from low clouds that hang over the inselbergs.

Inselbergs, a loan word from the German language meaning ‘island mountain’, describes the rocky hills that rise abruptly from the plains. These isolated outcrops and the foothills of the escarpment collect rain and provide water for birds and mammals, and drain into the Gaub and Kuiseb River catchment. The Kuiseb, one of the main ephemeral rivers of Namibia, has been described as a ‘linear oasis’ in its importance as a water source for wildlife. The Namib grasslands are generally unsuitable for domestic livestock, yet can support large numbers of wildlife adapted to semi-arid conditions. Oryx and springbok can survive weeks without drinking water by extracting moisture from plants.

Hartmann’s mountain zebra (HMZ) require regular water, and find it in rock pools, by digging in dry river beds for underground water sources, and by making use of farm dams and water holes created for wildlife. In addition to our east-west migration corridors, there is also potential for increased north-south connectivity, from the Naukluft Mountains to the Kuiseb Basin, migrations that could prove essential to HMZ during drought and future climate change.

The main threats to the project area and larger connected landscape—causing ongoing loss of biodiversity—include climate change and desertification; farming, leading to rangeland degradation; abandoned/unused fences harming and inhibiting movement of wildlife; illegal hunting and poaching; depletion of aquifers; light pollution, disrupting nocturnal species; invasive flora; vulture kills from poison and lead used in predator control; and pesticides harming birds and insect-dependent small mammals such as bat-eared fox, Cape fox, jackal, and the small wild cats. While farming of domestic livestock—cattle, sheep, and goats—continues, area-wide land use is now largely tourism and wildlife, with limited trophy hunting. SLT is actively reducing and containing the human footprint on our lands and is committed to dark sky principles and minimal disruption to wildlife. 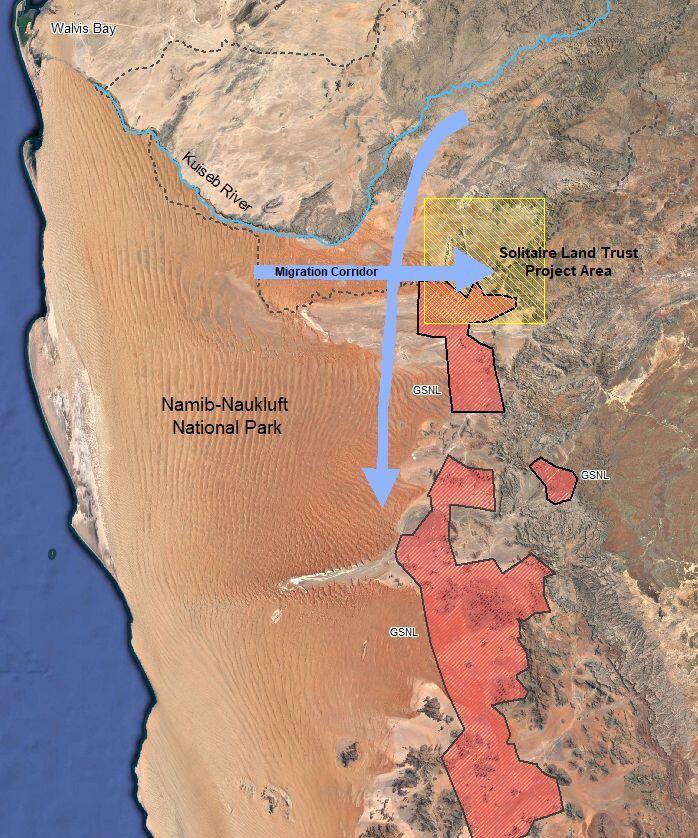 The Solitaire Land Trust is part of an operational Protected Landscape Conservation Area, the 5,730 km2 Greater Sossusvlei Namib Landscape (GSNL) identified in 2007 as a “priority conservation area” in Namibia. It is adjacent to the Namib-Naukluft National Park (NNNP), one of the largest game-parks in the world. The GSNL, a Biodiversity Project initially funded by UNDP Global Environmental Finance, joins area landowners in a cooperative effort to restore and preserve habitat and migration corridors for wildlife. GSNL facilitates wildlife movement studies, annual game-counts, aerial surveys, and rainfall data records across the landscape.

The socio-economic health of the local landscape is dependent on the stability of our neighboring Private Protected Areas and the small, privately owned lodges that support them. We work together via local organizations, e.g., the GSNL and the Nauchas Neighborhood Watch, to address poaching incidents, wildfires, poverty, and crime.

SLT/SCF believes that increased habitat protection, vast open space, and healthy wildlife numbers will enhance the reputation of our area as an exceptional conservation and tourism destination, to the benefit of all stakeholders. We endorse co-management of habitat initiatives with the Namibian Ministry of Environment, Forestry, and Tourism and encourage conservation careers, a viable livelihood for the ambitious in a country with high youth unemployment. SLT/SCF can grow its work-force by hiring for fence removal, water point maintenance, security, and tourism activities such as guiding and game drives. SLT/SCF also participates in a long-term Hartmann’s mountain zebra population ecology study by Professor Morris Gosling; a Namibia-wide cheetah study by IZW Leibniz Institute, and supports the creation of a Vulture-safe Zone in the greater Solitaire area. 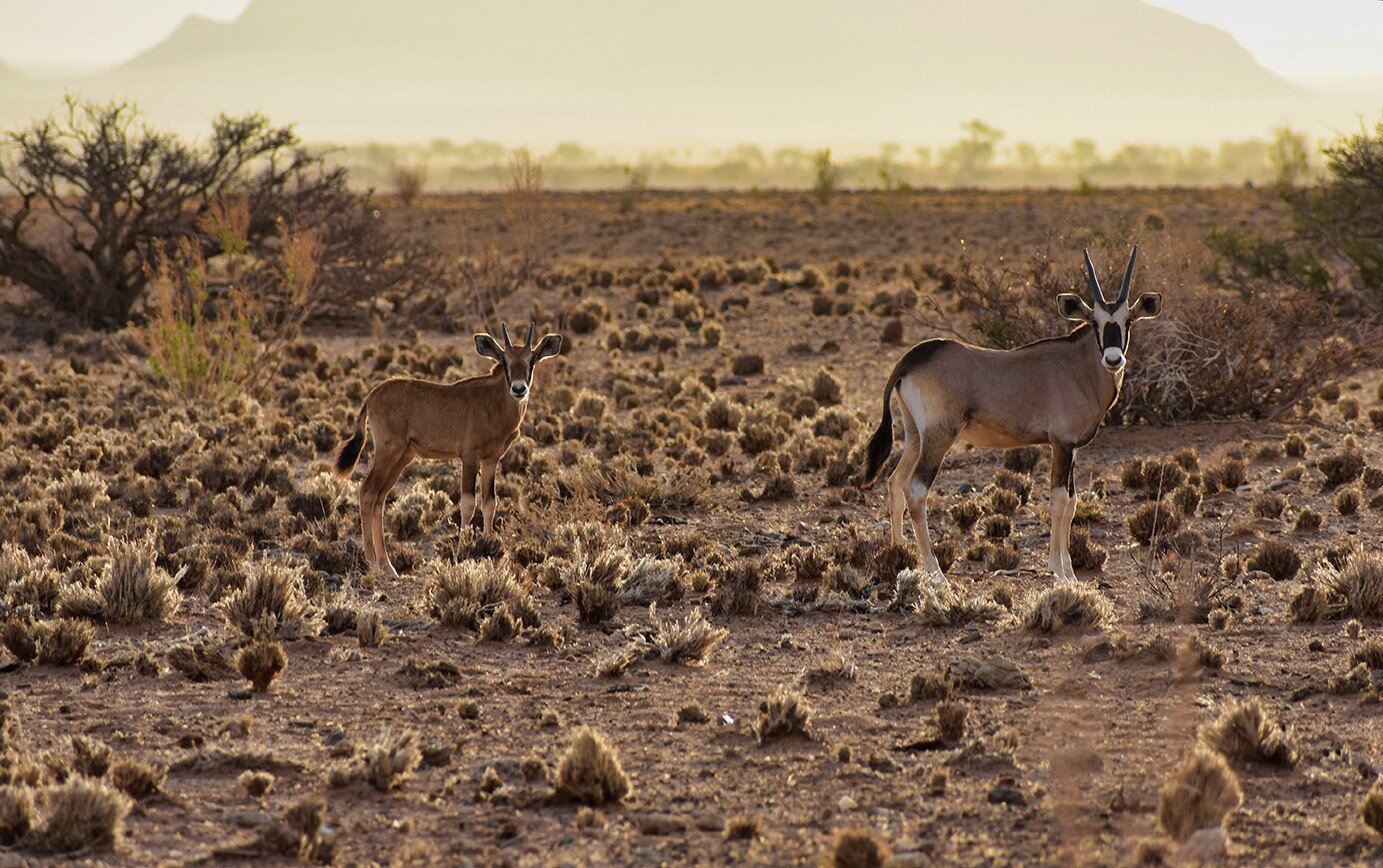 How You Can Help

The Solitaire Land Trust seeks financial contributions to purchase and protect additional lands in the area, and to fund a SLT Warden and team of wildlife rangers.

We also welcome scientists and students to do ecological research on our lands and can provide limited housing and field support. 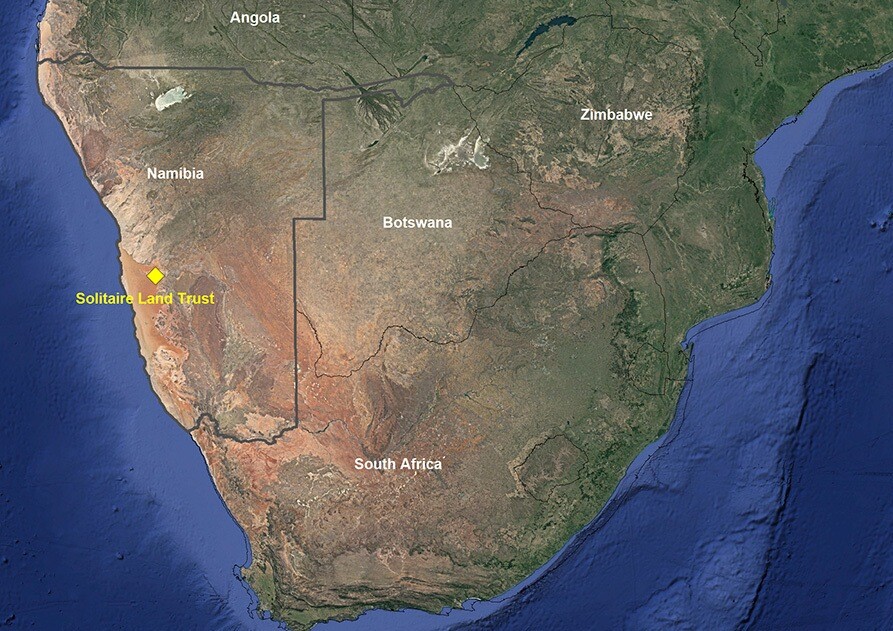 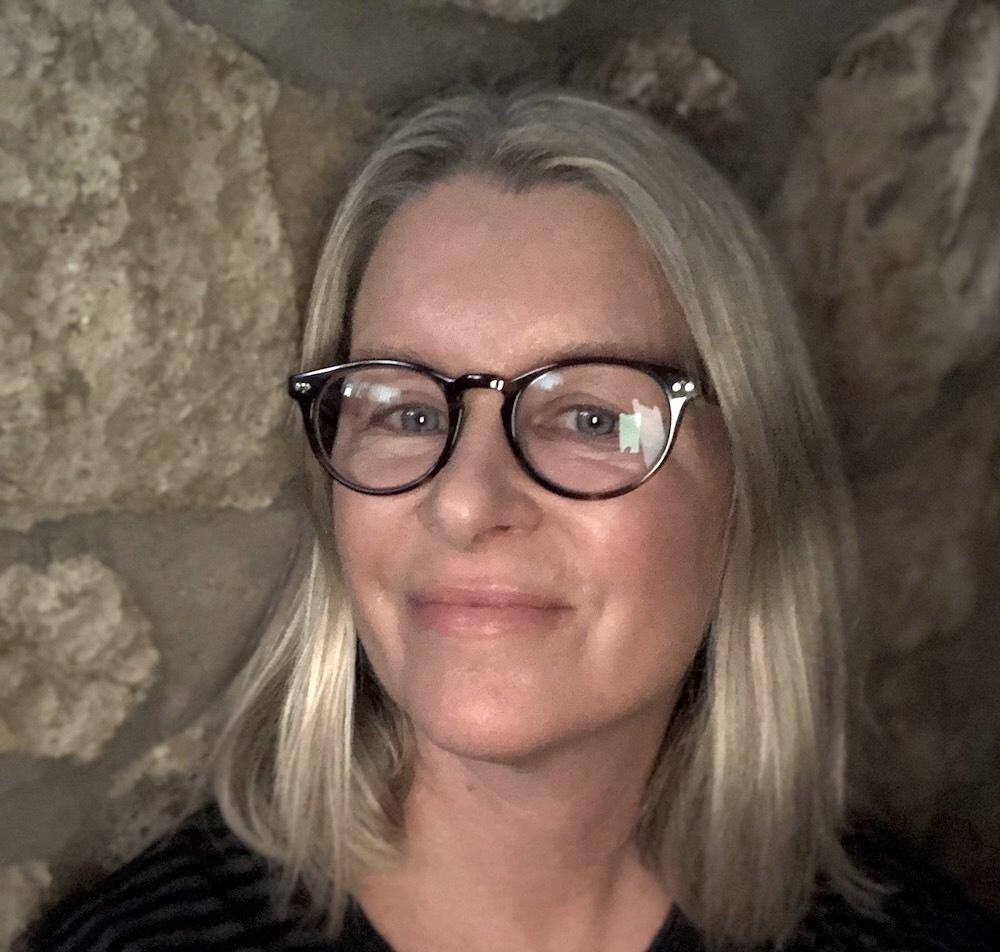 Carey Peterson is a professional writer, editor and conservationist. She is co-author, with friend and former husband Robert Glenn Ketchum, of The Tongass: Alaska’s Vanishing Rainforest, published by Aperture. In addition to many local conservation initiatives in the various places she has lived, including New York, Hawaii, California, and Washington State, she served as development director for Rod Jackson and Darla Hillard at The Snow Leopard Conservancy. She has traveled through all 50 states, and much of China, Japan, Europe, Central America, and Africa. She is currently a Managing Director of the Solitaire Land Trust in Namibia, a habitat and migration corridor restoration project and has lived on the edge of the Namib Desert for the past 9 years.

‘Rewilding’ Ambiguity 2: Impressions of an American in Denmark