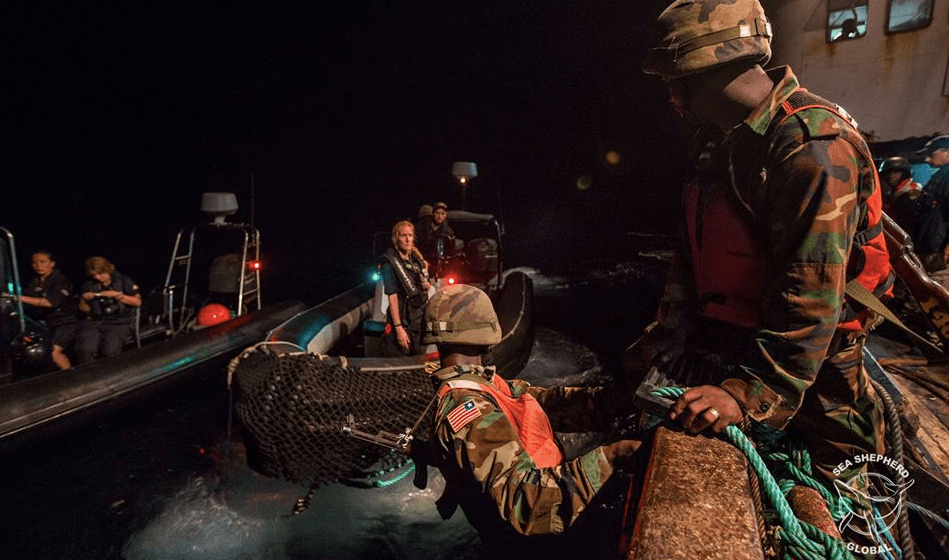 Under the Direction of Sea Shepherd Captain Peter Hammaerstedt, Sea Shepherd interventions in the waters of Gabon, Sao Tome and Liberia have been extremely successful. Sea Shepherd has officially formed partnerships with West African governments to stop illegal fishing activities inside the territorial waters of these nations. This is a program that Sea Shepherd intends to expand around the African continent.

The Bob Barker:  Presently operating Operation Sola Stella in partnership with the government of Liberia.

For the past 6 weeks, Sea Shepherd Global, in cooperation with the Ministry of National Defense in Liberia, has been using The MV Bob Barker as a capability-building tool for the Liberian Coast Guard.

As The MV Bob Barker patrols Liberian waters, Israeli maritime advisors and conservationists are training Liberian Coast Guard sailors on procedures that follow Liberian rules and international standards of safety and seaman’s best practices of inspections and boardings at sea.

Sea Shepherd Global‘s Operation Sola Stella has already led to the arrest of four fishing vessels and is our latest campaign to tackle illegal, unreported and unregulated (IUU) fishing off the coast of West Africa.

The Liberian Coast Guard Boarding Teams are committed to shutting down criminal activity in Liberian waters.

On March 21st, after receiving intelligence that a refrigerated cargo vessel was suspected of transmitting a fraudulent identity outside the Port of Monrovia, the Liberian Coast Guard assisted by The MV Bob Barker crew and Israeli maritime advisors and conservationists boarded the 93-meter Sierra Leone-flagged motor vessel Lian Run.

The Lian Run has been detained five time previously over the past five years, and has a history of IUU fishing activity. During the inspection, it was determined the vessel was carrying 460 tons of fish cargo on board, and intended to offload in the Port of Monrovia. The captain of the vessel was unable to present a cargo manifest for the fish on board, a legally-required document, without which it’s impossible to determine the origin of the fish.

On March 13th, the Nigerian-flagged fishing vessel Star Shrimper XXV was the fourth vessel to be arrested by the Liberian Coast Guard as part of Operation Sola Stella, Sea Shepherd Global’s latest campaign to tackle illegal, unreported and unregulated (IUU) fishing in West Africa. The Star Shrimper XXV was arrested for actively fishing in Liberian waters without a license.

Owned by Atlantic Shrimpers Limited, the Star Shrimper XXV is ‘sustainably-certified’ under ‘Friend of the Sea’ criteria and exports its catch worldwide through Primstar B.V., which is in turn owned by the Dutch fishing giant Cornelis Vrolijk.

February 23rd:  Operation Sola Stella, a new campaign to eradicate illegal fishing with the Liberian Ministry of National Defense, kicks off with the arrest of three poaching vessels: bit.ly/2lbl9GT