​The Wildness Within: Remembering David Brower 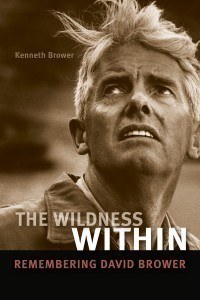 A portrait of the modern environmental movement

“A worthy tribute and a good lesson on the conservation movement.” —Kirkus Reviews

Says Paul Hawken, ‘No single person created more ways and means for people to become active and effective with respect to the environment than David Brower. That is sure.’ Photos.” —Publishers Weekly

The twentieth-century environmental movement owes much to a single man: David Brower. Countless natural wonders would have been lost if not for his efforts and the tremendous energy put forth by organizations he directed and/or founded (including the Sierra Club, Friends of the Earth, and the Earth Island Institute). A tireless defender of wild areas, Brower worked to protect iconic places, including the Grand Canyon and the California redwood forests, and his work and passion helped define modern environmentalism.

For the hundredth anniversary of David Brower’s birth, his son Kenneth Brower, an acclaimed nature writer, has brought together the testimonies of nineteen environmental leaders whose lives and careers were transformed by David Brower; the result is a book in which a repertory company of path-forgers reveal their deepest values and most moving experiences. Reading like an adventure novel told by the intrepid folks who rode alongside Brower, The Wildness Within  presents illuminating anecdotes about a multifaceted man who changed the world, serving as a guide to young people and a bane to bureaucrats and others more cautious in their approach to the crises at hand.

In partnership with the Earth Island Institute and Brower’s family and friends, Heyday is proud to cosponsor the year-long David Brower Centennial, beginning May 17, 2012. The celebration will include the launch of The Wildness Within along with a major conference symposium, a lecture series featuring legendary environmental figures, and an art exhbit on “the art of advocacy,” which will highlight Brower’s pioneering role in using large-format color photography books as a form of activism.

From The Wildness Within:

“He was fearless, and that rubbed off.”
—Amory Lovins, author of Reinventing Fire

“Dave was always stirring up trouble, and I was always happy to pitch in.”
—Paul Ehrlich, author of The Population Bomb

“Thank God for Dave Brower; he makes it so easy for the rest of us to look reasonable.”
—Russell Train, head of the Environmental Protection Agency under President Nixon

“In his field, Dave was a genius. His ability to inspire people and stimulate people and get the voters following what he was doing—both by the written word and the spoken word and in individual contacts—that was extraordinary.”
—Harold Gilliam, former environmental columnist for the San Francisco Chronicle

“He had this unusual blend of human characteristics: the blessing of intelligence, the blessing of being able to think on his feet, and the blessing of a sensitivity to people….He was willing to risk his jobs and friendships for what he believed was right. So very few leaders are able to do that.”
—Huey Johnson, pioneer environmentalist and founder of the Trust for Public Land

“He was an ‘elder’ that stayed close to the ground. He made young people hopeful, and fiercely protective of the Earth.”
—Paul Hawken, founder of Smith and Hawken, and coauthor of Natural Capitalism