The cover of a book that made a big difference 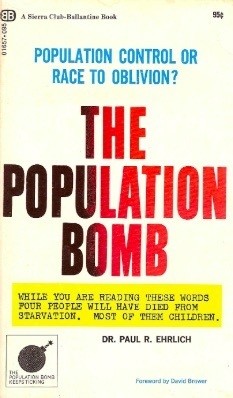 The Population Bomb changed people’s attitudes about human population in the late 1960s and 1970s. Then we in the USA drifted back to complacency. Global climate disruption is making us realize the cost of that complacency. I finally read this book, and was amazed at its breadth and depth.

A friend sent me a copy of Paul Ehrlich’s classic The Population Bomb. I had never read it although it helped to launch concern about human population in the USA. It was different and better than I expected. This little book sold over 2 million copies and introduced many people to the hazards of overpopulation.

First a little background about Dr. Ehrlich. He is a biologist specializing in butterflies and moths. He has been studying a species of butterfly, a checkerspot, for longer than any other species has been studied by a single person. He has published over a thousand scientific papers and 50 books, which range from The Birders’ Handbook, which describes the natural history of all the birds of North America, to Jaws: The Story of a Hidden Epidemic about orthodontia, breast feeding and diet. My favorite Conservation Biology for All, which Ehrlich edited. It is available free, online.

I had known about Ehrlich’s population activism after The Population Bomb was published in 1968. Indeed, I joined ZPG (Zero Population Growth, later renamed “Population Connection”), the organization he helped to found that same year. When I finally read the Bomb I was surprised—it wasn’t the diatribe on population that I expected; the book has a much broader view of life on Earth. Much of what is predicted in the book has happened, although not necessarily in the way expected.

The Bomb is much more than a rant about human population. Indeed, it touches upon many concerns that were not commonly discussed 50 years ago, but which now have become major causes of worry. Foremost is climate change. The Bomb lists problems that the world was facing in 1968, including “…too much carbon dioxide—all can be traced easily to too many people.” Does that theme sound familiar?

Later, Paul Ehrlich was one of the founders of the Society for Conservation Biology, the professional group of scientists working to slow extinction of species. The Bomb touches on the importance of nonhuman species, and how our increasing numbers causes increasing extinctions. It uses DDT as an example of toxins in our environment and the lack of governmental control of the millions of available chemicals. Malnutrition and starvation were great concerns in the late 1960s, and The Bomb predicted that there would be more hunger as people increased—but also foresaw the possibility of improved agricultural technology that would give some time to slow population growth. Other subjects touched on in this readable book include the value of sex-ed, the importance of avoiding coercion, the promise of using the media to educate about population, and the impact that some religions have in encouraging large families.

Some people feel that our planet has unlimited resources, and that our greatest resource is people—thus, the more humans, the better. A professor of economics, Julian Simon, was a spokesman for these cornucopians. Simon maintained some absurdities. He stated: “We now have in our hands—really, in our libraries—the technology to feed, clothe, and supply energy to an ever-growing population for the next seven billion years.” Let’s say that the population grew at a slow 1% each year. In seven billion years it would have increased by 3 x 1030249616. This number is a lot larger than a google (10100), and much, much larger than the estimated number of atoms in the universe, which is only 1080! It is difficult to have much faith in someone who would make such an absurd statement.

The Bomb educated readers and catalyzed a huge change in our attitudes about population and family size. I remember reading an article in Life Magazine on ZPG, but never saw any of Dr. Ehrlich’s many appearances on the Johnny Carson show—I was in medical school. The world would be a lot better off now if we had all heeded the book’s message.

In an article on the 40th anniversary of the publication of The Population Bomb, Anne and Paul Ehrlich wrote of two regrets. Their choice of title was: “Population, Resources, and Environment”, but the publisher chose otherwise. The other concern had to do with authorship. Anne and Paul wrote the book together and consulted many other experts to be certain of the factuality of their statements. The publisher, however, insisted on having just one author. Since Anne has been cited as coauthor of much of the couple’s work, I had wondered whether Paul wrote this bestseller alone. Now I know that it was our chauvinistic society that caused Anne’s name to be left out.

So , could it be republished in an updated version with both authors credited ? And and new title