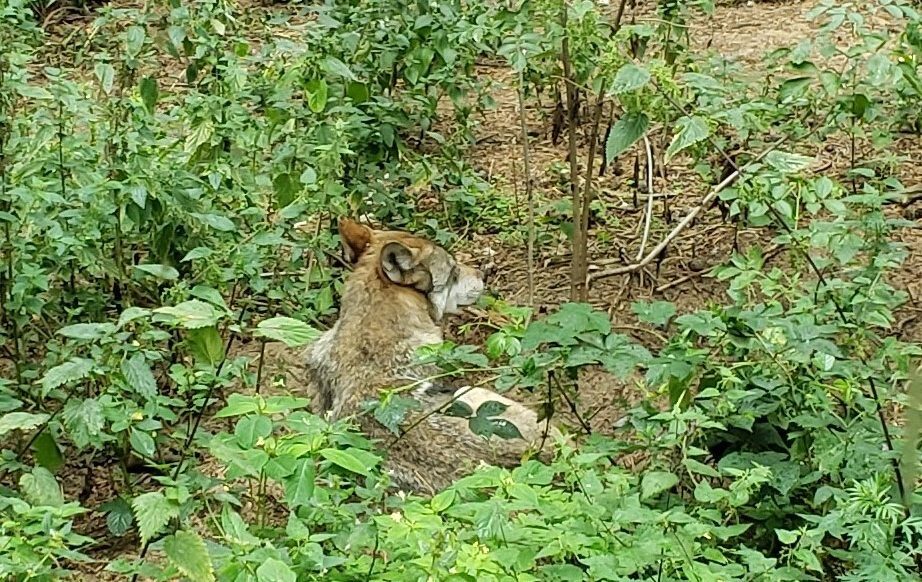 It was Grandparents Day last August at the kindergarten in Cumlosen, a village in former East Germany. There were outdoor games, face painting, singing, and a small carousel. Then the teachers did a skit: the Big Bad Wolf and the Three Little Pigs. The wolf dies, and everyone cheers.

They may want to rethink their message.

After 150 years, wolves have returned to Germany. “They’ve been coming west from Poland for many years,” said my friend Holger Galonska, a forester and grandfather of a kindergartner. “But in DDR times, farmers shot them.” In 1990, when the Russian-controlled Deutsche Democrakische Republik (DDR) collapsed and East and West Germany were reunited, wolves had already been protected by the European Union (EU) and West Germany. Now they were protected throughout Germany.

Uwe Roese, a wolf monitor in Brandenburg in his office © Chris Bolgiano

By the end of 2019, 105 wolf packs, 25 pairs and a few lone animals were documented, mostly in former East German states. Populations of wolves are scattered from Scandinavia to Spain, Italy, and eastward into Russia, but one of the densest concentrations of wolves amid humans today is thought to be in Brandenburg, the state in which Cumlosen is located. “Brandenburg has at least 250 wolves,” said Uwe Roese, one of a network of state wolf monitors whom I visited after the kindergarten event. By the year-end tally in 2019, that figure was closer to 350.

Germany is one of the most environmentally conscious countries in the world, committed to recycling, clean energy, and biodiversity. Many Germans and numerous nature/environmental organizations welcome wolves as a symbol of nature’s resilience and the promise of a more balanced ecosystem. Roughly a third of Germany is forested, with a patchwork of protected places, some with centuries-old oaks. Of the three species of deer in Germany, the smallest, the roe deer, is so abundant that fencing areas of forest regeneration is common to keep both deer and wild boars out. A 2012 study of over 3,000 wolf scats in Germany found that roe deer composed 55.3% of the wolves’ diet, followed by red deer (20.8%), wild boar (17.7%), and hare at just under 3%.

But the rapidly multiplying wolves are also killing livestock and scaring people out of the woods, where foraging for berries and mushrooms is a millennia-old custom. “I tell people, don’t be afraid unless you’re wearing a red hood and carrying a basket of food on your arm,” Holger said with a grin. Deconstructing those ancient memes is a daunting task. The politics of protection are further complicated by the anti-wolf advocacy of the far-right party, Alternative for Germany (AfD), which uses rhetoric about wolves similar to its anti-immigrant propaganda. AfD is popular in former East Germany, where some people feel disadvantaged by reunification and resent the dominance of western politicians. 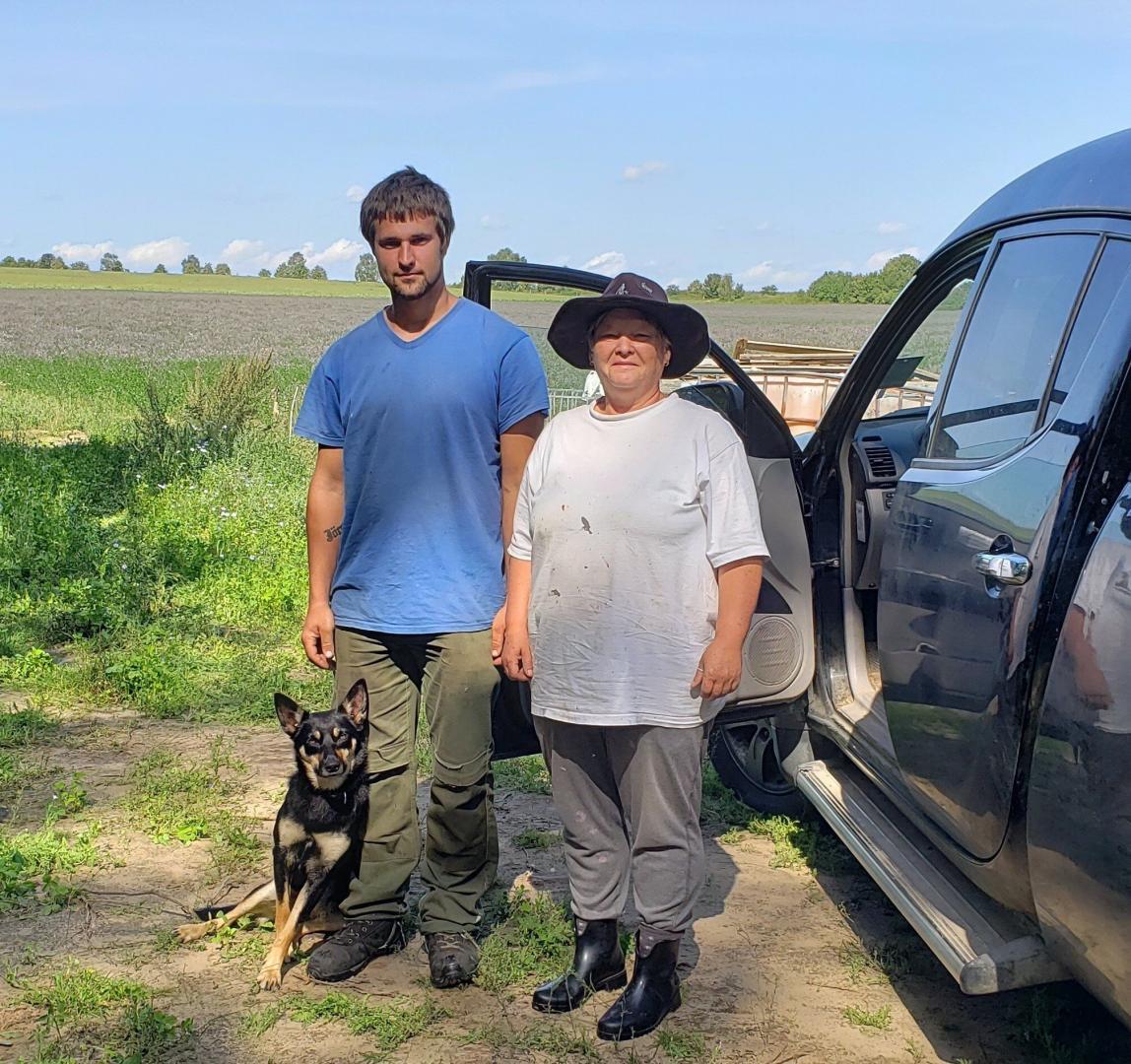 Carmela Schulz with her son and her small herding dog. She was not satisfied by the guard dog she bought © Chris Bolgiano

Wolves sometimes panic sheep into running over a cliff or onto train tracks, or otherwise wounding themselves so badly that the farmer needs a veterinarian or a butcher. “I feel endangered,” said Carmela Schulz, who has lost several dozen sheep in recent years. She bought a guard dog, but he hasn’t proved aggressive enough. Several dogs are necessary to be truly effective, which is expensive, as is electric fencing. And there are places where fencing is not feasible, like the flood plain of the Elbe River, the former border, where large flocks of sheep maintain open meadows. Guard dogs there would need to be aggressive toward wolves but friendly toward the many hikers and bicyclists that now tour along the river road that once connected watchtowers. 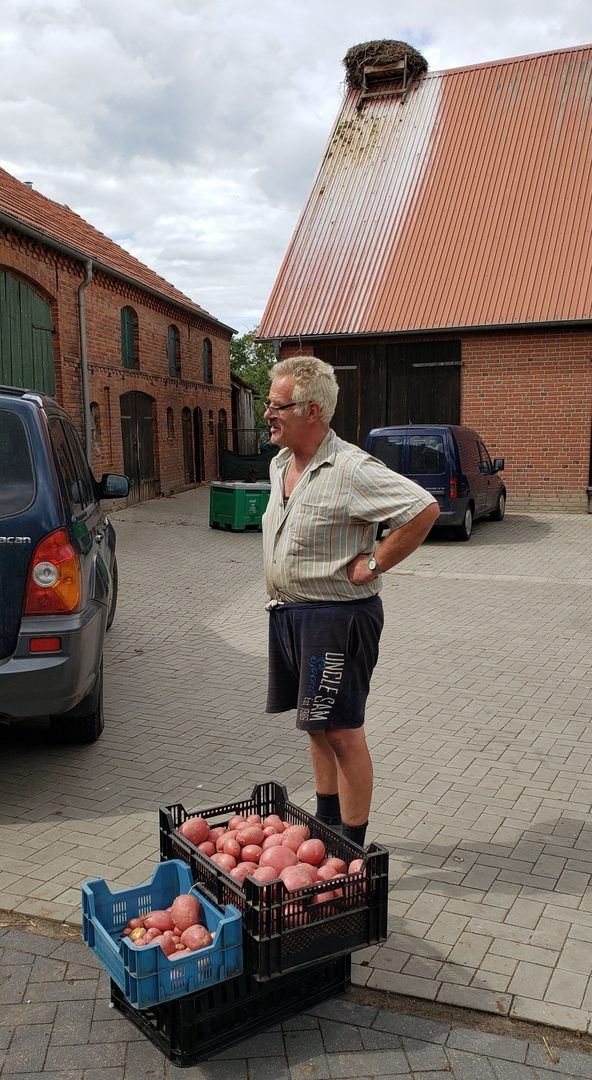 Cattle can also panic and break through fences into streets or fall into pits. “We found only bones of 3 calves, and never found the cow at all,” said Siegmund Mackel. We were standing in front of his barn on a farm that has been in his family since 1723. His equipment garage had a chimney crowned with a stork nest. “We’re supposed to get damage payments from the government,” he continued, “but we couldn’t find spoor in the field, so they said it could be wild dogs.” 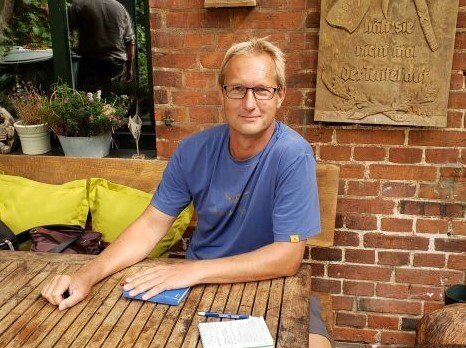 That seemed unlikely to Hanno Taufenbach, editor of the local paper Der Prignitzer, named for the district. He visited Holger regularly for news about whatever was happening in forests and fields. “The government must be more flexible,” Taufenbach said, “and when it’s not clear, decide in favor of the farmer. The money is there. We’re not talking about 1,000 animals a year,” he emphasized. “In the Prignitz area so far [in 2019], 50 animals have been killed.” He scoffed at fear of going in the woods. “It’s fairy tales. Driving a car is more dangerous, and dogs bite people all the time and no one writes about it.”

There are others who not only don’t fear wolves but go in search of them. A hotel in the adjoining state of Lower Saxony offers weeklong stays with wolf-tracking sessions and child-care modeled on wolf pack dynamics. The non-profit Biosphere Expeditions, an international conservation NGO, offers travelers from around the world the opportunity to pay to join research expeditions and help collect field data.

Wolf tourism does not include hunting, which is banned for the large canids by the EU, but most countries allow some form of retribution against problem wolves. And there is some of the “shoot, shovel, and shut up” attitude of ranchers in the western United States where wolves have been reintroduced. The major cause of wolf mortality by far, however, at least in Germany, is vehicles. 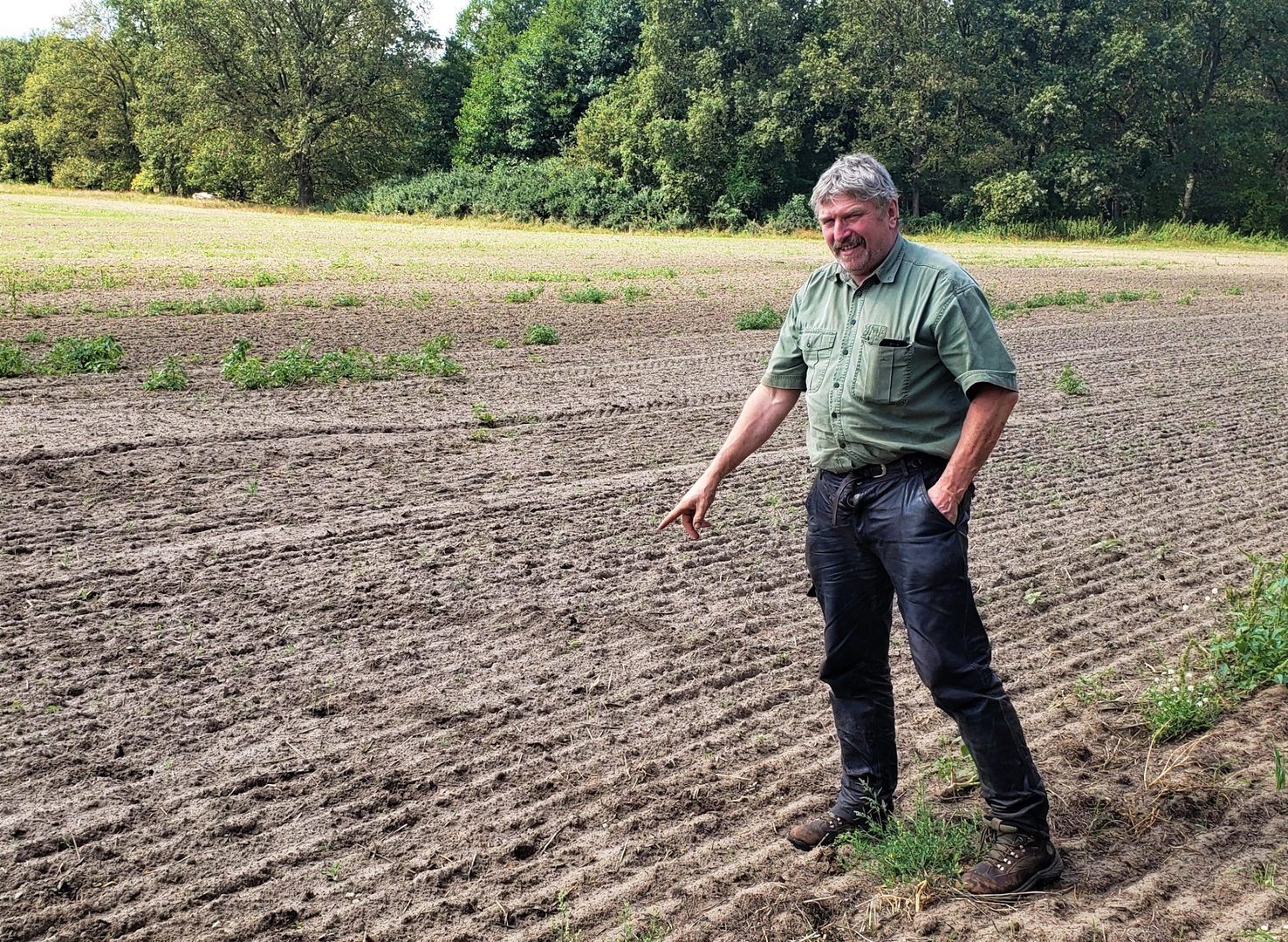 Debates in Germany are ongoing about how to accommodate wolves in a cultural landscape dominated by humans. In Brandenburg, the third wolf management plan was issued last September by a working group of 17 stakeholder organizations. It promises higher levels of government funding for certified guard dogs, preventative fencing, and various kinds of damages, and defines how to treat dog-wolf hybrids. Booklets on preventing attacks have been sent to all livestock farmers and information is widely available to all citizens. Such efforts to live with wolves in the fatherland of wolf prejudice, together with the remarkable ability of wolves to live there at all, are surely hopeful signs for the future. On an outing with the Galonska family to the zoo in nearby Perleberg, I watched Holger’s six-year-old granddaughter peer intently into the wolf enclosure. Maybe her generation can finally update the grim image of wolves to a view brightened by knowledge and understanding.

Holger’s granddaughter looks into the wolf enclosure at the Perleberg Zoo in Brandenburg, Germany © Chris Bolgiano 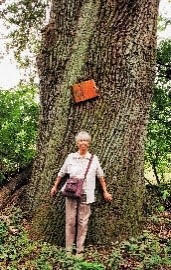 Chris Bolgiano, standing in front of an oak near the village of Gadow, is a Virginia writer who was born in Germany.  She met the Galonska family of foresters in 1991 and has visited several times since, most recently in August, 2019. She serves on the Rewilding Leadership Council, where her books are listed. www.chrisbolgiano.com