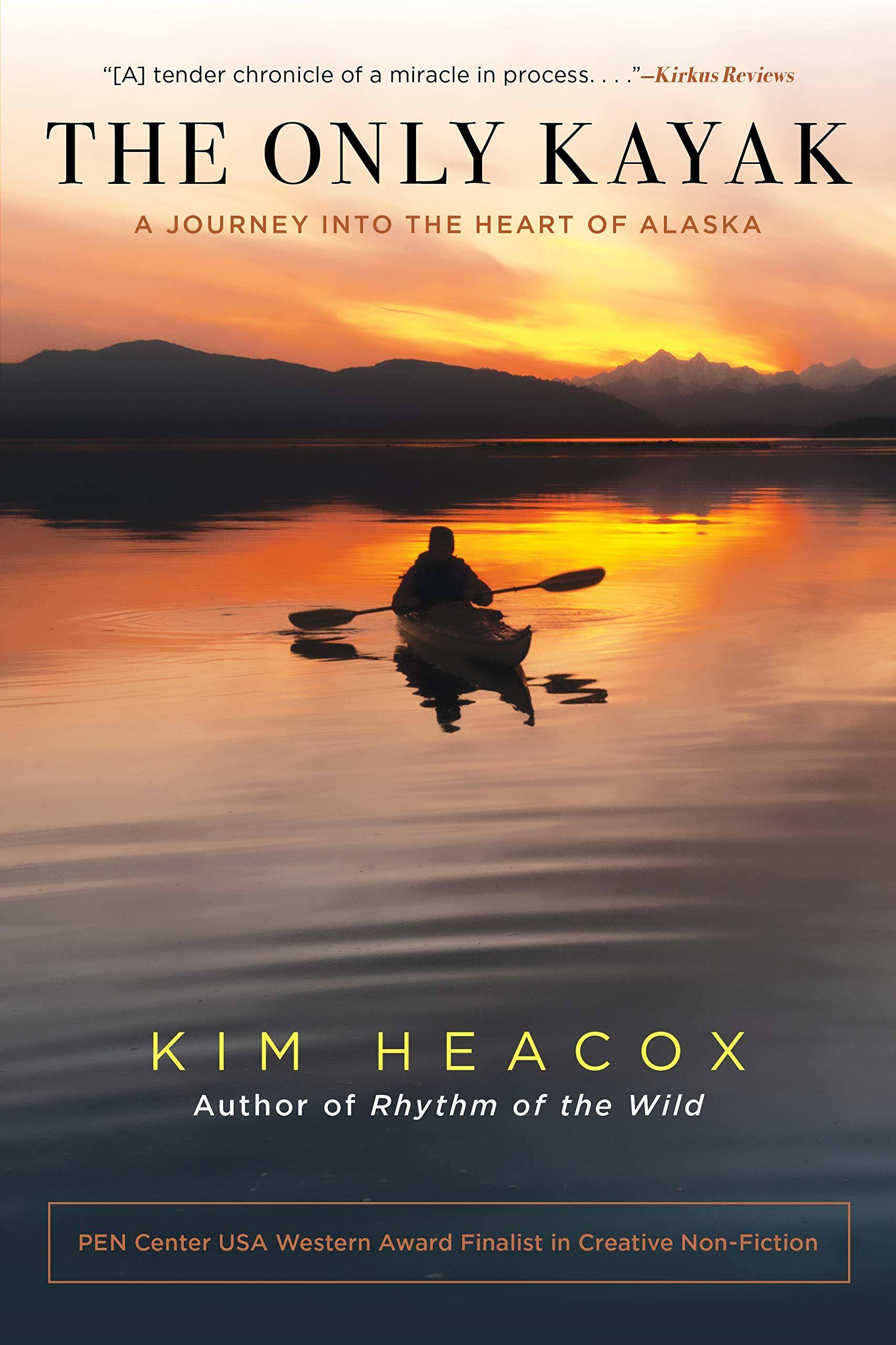 The Only Kayak: A Journey into the Heart of Alaska

Kim Heacox and his new friend and fellow National Park Service seasonal ranger, Richard Steele, launched their double kayak into Glacier Bay in 1979 before their work season began. They were not seasoned paddlers. “In Reid Inlet we are two men in a little boat, rookie park rangers in Alaska, model GS-4 employees who have no idea what we’re doing,” writes Heacox. “I’ve come from Death Valley. To say we are naïve would be generous. From reading our embellished NPS summer seasonal park ranger applications, you’d think we were Leatherstocking and Black Elk, brother hunters in the wilderness, sons of the earth.” Romantic adventurers and chechakos they certainly were, but they safely paddled on a week-long trip that changed their lives.

Heacox and Steele became Alaskans and park rangers, and Heacox went on to become a writer, photographer, and Alaska conservationist who has published fifteen works of memoir, fiction, biography, history, natural history, and conservation. The Only Kayak features elements of all of these genres except fiction.

A year after Heacox and Steele found themselves in the only kayak on Glacier Bay, I paddled there too but in Muir Inlet, the east arm of the Bay rather than the west arm where they went. My friend and I read John Muir, listened to icebergs calving off tall faces of tidewater glaciers, marveled at the wildness of the place and worried about its future, as Heacox and Steele had a year before our trip. One morning, paddling in a thick pea-soup fog at the very top of Muir Inlet, we were startled to hear a voice boom out of the fog, an announcement from a huge white cruise ship stuck in the fog. Paddling toward the sound we could see the white wall of the ship rising into the fog. We were not as deep in the wilderness as we thought.

One theme of The Only Kayak is the change that Heacox experienced in Alaska over the quarter century he explored it before writing this book, serving as a ranger in Denali as well as Glacier Bay and ultimately leaving the Park Service, settling in Gustavus, a small community near the mouth of Glacier Bay, and pursuing his writing career. After a quarter century, he observes in his epilog that “If Glacier Bay has taught me anything, it is the willingness to accept a little fear and uncertainty in my life, in all our lives, from childhood to old age. It’s a long and winding road, as Paul McCartney would say, but no worthwhile journey is short, straight, or easy. We talk about how the work is changing,” he continues, “but what we’re really talking about is how we are changing the world. It doesn’t have to be. I’ve yet to see a man improve a tree.”

Another theme is love, for the wild, for place, for good friends. Heacox describes the powerful effect a geology professor had on him. Talking of glaciers around a campfire one evening, a student lamented that such “grand icy processes” as Professor Folsum was describing were not happening on a human scale, within a lifetime, and thus beyond the experience of people around today. Folsom responds:

There is such a place, it’s a bay in Alaska near Juneau, a bay reborn from the icy tomb of a great glacier that buried it just two hundred years ago. When the ice retreated, it unveiled a new home for wolves and whales, a world in transition from bare rock to bears, a magical place, a miracle place . . . if you believe in miracles.

A few years later, Heacox finds himself in this “miracle place” and the miracles he finds there are not just “grand icy processes” but great and lasting friendships.

One friend is Melanie, a fellow seasonal ranger assigned with him and Richard, to interpret the marvels of Glacier Bay to tourists on a Princess cruise ship. Heacox and Steele hate the duty, but Melanie thrives on it. Heacox writes of the tourists, their attitudes and questions, humorously and dismissively; and he and his pal decide they can’t do it anymore and wonder how Melanie can “stand in one place and parlay a thousand questions without losing her patience or smile.”

She speaks about the “interpretive moment” of having a thousand people in your hands and being able to change the way they see the world and themselves in it. “Any job that does that is a privilege,” she says. “We can’t ask them to be where we are; we can only ask them to take the journey. And for some, the first step on that journey is on a cruise ship in Alaska. We need to celebrate that.”

Then there is Michio Hoshino. Ultimately Kim and Richard find they are not the only kayak on Glacier Bay near the end of their 1979 trip. They spot a single guy paddling a double kayak. “He wears a knit cap with tassels, like Greenland Inuit wear, and paddles a steady beat to the north.” Later they learn he is a Japanese photographer named Michio Hoshino. He returns to Bartlett Cove wet, cold, and hungry and they take him in, feed him a dinner he eats ravenously, and then carry him to his tent where they leave him lying there “like a distended whale.” A few years later Heacox is in Denali National Park working to photograph a ptarmigan when he notices another photographer focused on the same bird, but with a better angle on it. It is Michio, and they become fast friends. Michio, it turns out, is a terrific nature and wildlife photographer and they go out to shoot more wildlife photos together. They come upon six magnificent Dall sheep rams. Heacox describes the encounter:

“The wind is not so badly,” Michio says. “Today we will get good pictures.”

The rams begin to move away. I want to follow, but Michio suggests that we stay.

“I think they will come back,” he whispers.

That’s how he works: Find the convergence of animal, landscape, and light – the harmony of the spheres – and wait for them to align like some cosmic event. Don’t chase the animal. Let it come to you as it would to a good hunter, a hunter who knows the spirit of all things. Be ready. Chance favors the prepared mind.

They wait, and the rams come as Michio sensed they would.

The Dall sheep rams of Primrose Ridge come nearer and nearer until they stand on pillared legs and stare down at us from only ten feet away, shoulder to shoulder, eyes fixed like golden jewels in the sky, the stars of a deeper existence. For a long time we don’t move. I can hear myself breathing. Then slowly Michio rolls to his left to get a better background, whirring off shots with his wide-angle lens. The cold rocks crunch beneath him. The rams cock their heads but otherwise don’t move. I watch warm sunlight fill their nautilus-shaped horns and think, I’m dreaming; this can’t be happening to me.

Then they walk away, and I snap out of my trance.

I look over at Michio.

He grins and whispers, “Kim, are you still alive?”

Their friendship grows, as does Michio’s reputation. As I read about their encounters, something about Michio nagged at me and then I remembered – Michio had been killed by a bear in Kamchatka. Heacox is devastated. He quotes the late Barry Lopez’s tribute to Michio. Lopez wrote, “Michio’s awareness grew directly out of his devotion to the integrity of the animal, the integrity of the place, and the integrity of that unique relationship. You can see in his work a clear regard for what is profound, not cute . . . What he left us besides stunning images is a call to choose such integrity over material wealth, commercial success, personal image, and the other illusions that have become the stock-in-trade of advertisers and entertainers.”

Like Michio, he is devoted to these integrities. He expresses and evokes strong emotions in the reader, of concern for the fate of friends and of places like Glacier Bay, of excitement and fear in encounters with weather and other threats, of disgust at bureaucracy and environmental degradation, and much more. He conveys a powerful sense of loss, not only of his friend Michio, but of a Glacier Bay in which he could paddle “the only kayak.” He expresses both resignation and hope, the former perhaps more than the latter, and he anticipates threats to the Wild and the Bay that have only grown in the fifteen years since he published the first edition of The Only Kayak.”

Heacox tells a lot of history in this book, background to his experiences. He loses Michio but celebrates great friends like Hank Lentfer, a fellow writer and resident of Gustavus, his wife Melanie, Richard Steele, and retired NPS historian Bill Brown. He describes a rich life, the richness of good work, good friends, beautiful surroundings, and campaigns to protect the wild places and creatures of his beloved Alaska. He is a compelling writer, sharing his thoughts and experiences in an easy and enjoyable style. The Only Kayak is a great read, sobering in some respects, yet full of love and hope. There is work to be done to justify hope for a future that protects beauty and the wild in Alaska and elsewhere, and Heacox and his friends are hard at it despite inevitable losses and setbacks. This book should inspire all of us to join them in this work.