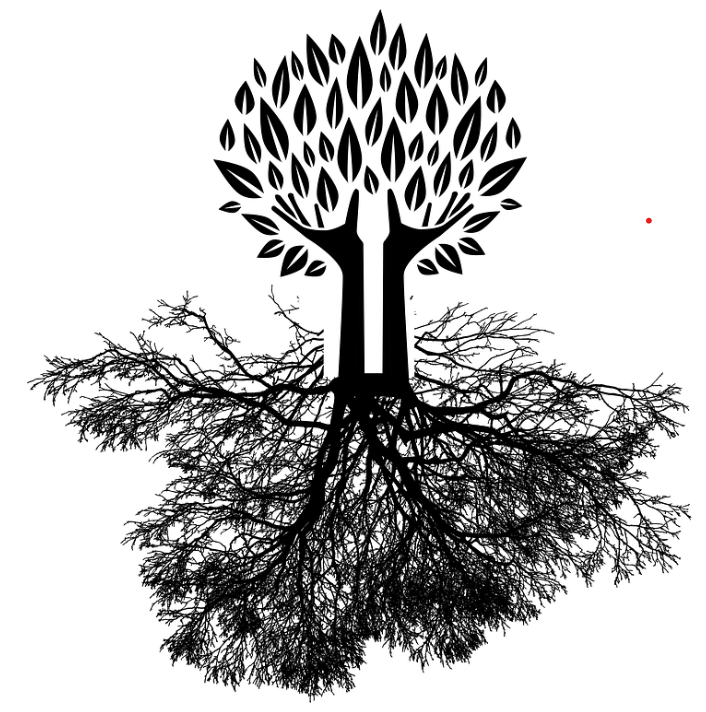 If humans are an amazing species and have created incredible technologies, why have we been unable to address the planetary environmental crises that we have caused?

As a lawyer and career senior executive at the U.S. Environmental Protection Agency in the compliance and enforcement program, I initially believed that increasing the use of modern pollution control technology could solve many of our environmental problems. Over the years, my faith in this technology will save us myth eroded. Since I left the EPA, I have delved deeply into the environmental crises facing humanity, including full-time study for three semesters in Harvard University’s Advanced Leadership Initiative. I have concluded that the existential environmental crises are caused by four root causes that we prefer to ignore.

If you believe in the need for rewilding the earth, but sometimes get frustrated as to why rewilding is so hard, then my analysis of these four root causes may resonate with you.

Summary
Below is a summary of my recent article in the Environmental Forum (free access) and a more detailed chapter in a climate change book.

From an evolutionary perspective, humans are an extraordinary species, with incredible capacities for intergenerational learning and local cooperation. Yet, our actions (primarily by people in the Global North) are causing multiple, interconnected crises that are eroding the earth’s life support systems, such as rapid loss in biodiversity, the conversion of forests into monocultures for agriculture, air and water pollution, and climate change.

Although these crises have been recognized for decades—and there have been dozens of official international conferences to address them—they have only gotten worse. We are not making progress because as a society we ignore four root causes: 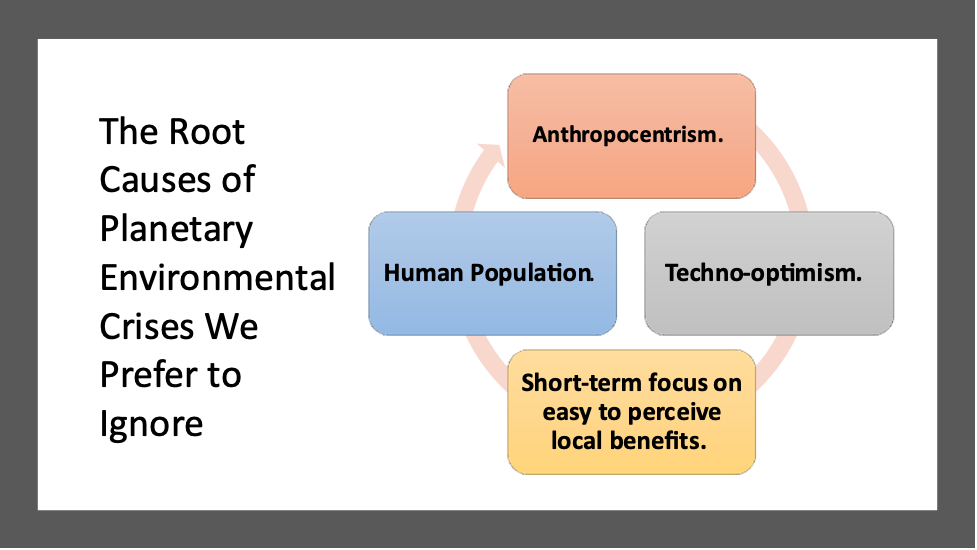 These root causes fuse together into an ideology. (An ideology is a set of beliefs that are resistant to change and that guide how we understand and act in the world, and even who we view as our friends.) This ideology holds that the planet’s other species are here for the exclusive benefit of humans, and technological innovations will offset the negative planetary impacts of endlessly increasing consumption and population on a finite planet, despite substantial evidence to the contrary. In the U.S., if you question this ideology, you may be excluded from meetings, denied a promotion, and/or dismissed as a radical who wants humans to return to living in caves.

Technological innovations (e.g., renewable energy) will only partially address these planetary crises as we also need transformative changes in our ideology and our actions. Challenging this ideology can lead us to examine often-overlooked solutions. For example, evidence shows that large investments to advance educational, economic, and reproductive autonomy for women can be a powerful tool for sustainability, improving lives, and reducing population growth. Similarly, we need to restructure our economy to create a circular economy where materials are re-used in a continual cycle instead of being used and discarded. And we need an economy focused on advancing long-term human and ecological global well-being instead of short-term private profits.

Implementing these solutions is hard because they challenge dominant cultural, economic, legal, and political powers. Effective solutions will require that humanity push beyond our evolutionary strengths in which we prefer to cooperate with people we know to solve local, easy-to-perceive immediate problems. Instead, we need to recognize complex problems and consider the needs of future generations, people in other countries, and millions of species that we are poised to extinguish. Environmental professionals, governments, businesses, and non-government organizations should recognize that technological innovation will not save us; instead we need to advance a more robust dialogue on these root causes and how to address them. 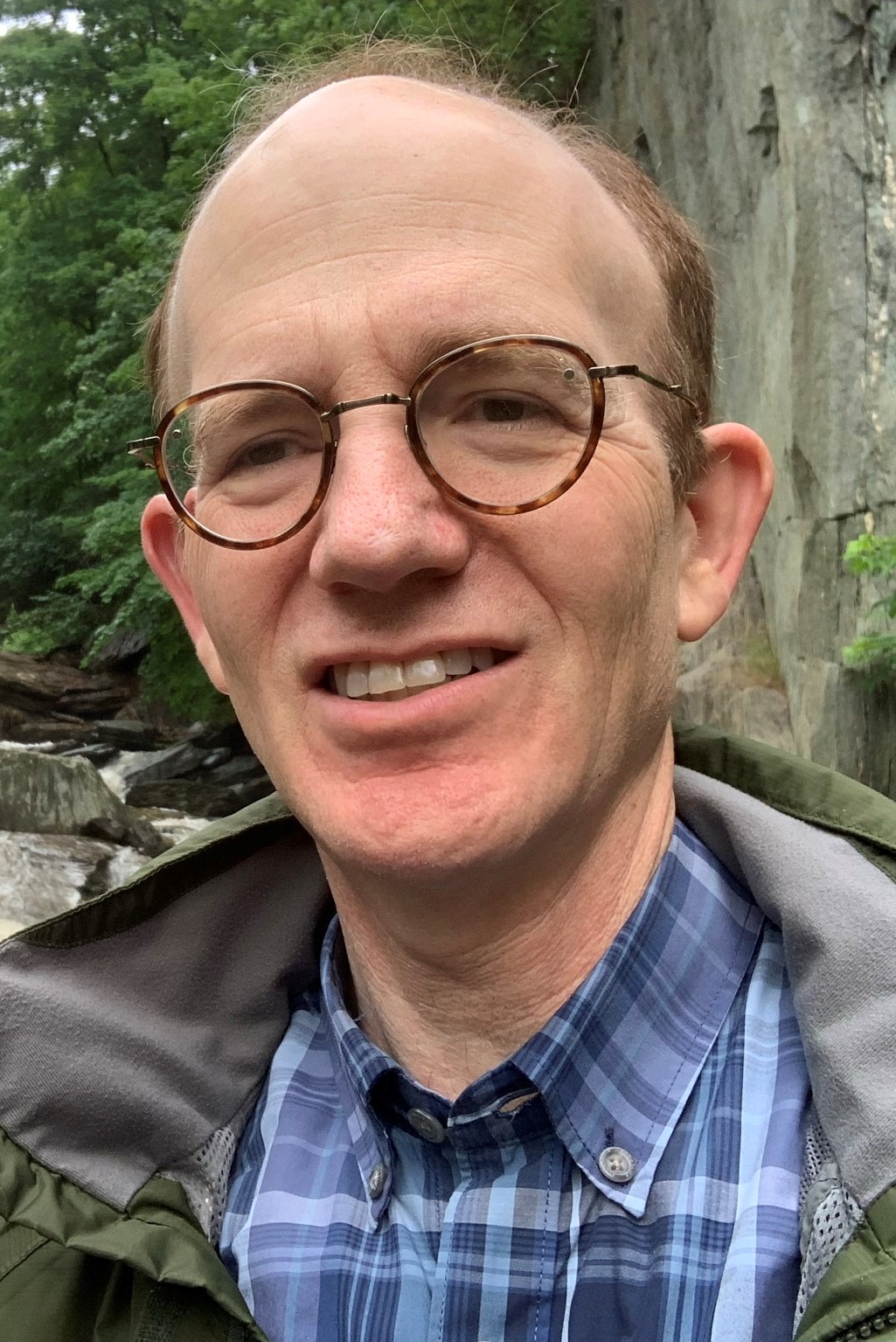 David was a 2021 fellow and 2022 senior fellow in Harvard University’s Advanced Leadership Initiative. David has published papers on the potential of advanced monitoring technology to reduce pollution,  how to design effective rules and permits, and recently an essay and book chapter on the root causes of our environmental crises we prefer to ignore.   He is now working to promote sustainability with a behavioral science focus.