Conservation biologists Bruce Wilcox and Dennis Murphy warned in 1985 that “habitat fragmentation is the most serious threat to biological diversity and is the primary cause of the present extinction crisis.”

Reed Noss and Larry Harris at the University of Florida acted on their warning by designing a conceptual nature reserve system for Florida consisting of core reserves surrounded by buffer zones and linked by habitat corridors. Most of the core reserves were existing big chunks of federal land. 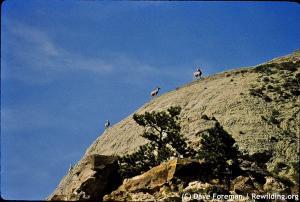 In a paper presented to the 1986 Natural Areas Conference, Noss said, “The problems of habitat isolation that arise from fragmentation can be mitigated by connecting natural areas by corridors or zones of suitable habitat.”

In other words, protecting and restoring connective habitat in a fragmented landscape can mitigate the problem of island-like nature reserves. From the Noss proposal, we can trace a new approach to protected area design that now dominates the field of nature reserve planning. [For general information on fragmentation, see the Wounds page, and for information on connectivity and linkages, see the Wildlands Network Design page.]

Continental planning for rewilding tweaks the way we see connectivity and fragmentation on the land.

For continental rewilding, the classic model of core-corridor-core becomes general landscape permeability in which large core habitats are embedded. Peter Singleton and his Forest Service colleagues considered landscape permeability for wolf, lynx, grizzly, and wolverine in the state of Washington and extreme southern British Columbia. They explain the shift as follows:

The early theoretical work in [the field of habitat fragmentation] was largely based on island biogeography theory, which emphasized perceptions of “islands” of suitable habitat in a “hostile sea” of nonhabitat.

Concepts of habitat corridors providing linear connections through this “hostile sea” developed from the application of island biogeography theory to conservation problems. Several more recent discussions of this issue have pointed out that these approaches focusing on “suitable” corridors through “hostile” landscapes may be overly simplistic, and have proposed that different conditions on the landscape create different levels of resistance to movement for different species. Landscapes between patches may encompass either habitats through which an animal can move easily or barriers that prevent or redirect movement. It is the composition and configuration of these characteristics that define the permeability of a landscape.

Singleton and company define landscape permeability as “the quality of a heterogeneous land area [a landscape] to provide for passage of animals.”

They explain the shift in how they view the landscape as, “In contrast to focusing on the identification of corridors or connected habitat patches, the evaluation of landscape permeability should provide a broader measure of resistance to animal movement and give a consistent estimate of the relative potential for animal passage across entire landscapes.” They explain that “the broader evaluation of landscape permeability provides an estimation of relative potential for animal passage across the entire landscape, including the identification of potential barriers to animal movement.”

Nonetheless, the core-corridor (linkage) model applies fully in more fragmented regions and through barriers in a generally permeable landscape. Landscape permeability is not a replacement for cores and linkages; but a complementary approach. Nor is it something entirely new. In 1992, for example, Reed Noss wrote that “multiple-use zones” could often serve a corridor function.

Animal movements can be either intraterritorial, within a home range for daily or seasonal travel, or interterritorial, “long-distance dispersal or exploratory movements outside of an established home range.”

Intraterritorial movement affects “individual survival and reproduction.” Interterritorial travel “influences the level of gene flow between groups (subpopulations) of animals, the ability of animal populations to become established in unoccupied suitable habitat, and other metapopulation functions.”

Certain species are more particular about permeability than are others. Singleton and company explain:

Some species, e.g., wolves and lynx, are able to move long distances through diverse habitats. For these species, maintaining landscape linkages that have relatively few landscape barriers but do not support breeding individuals may be adequate to provide for movement between areas where populations of those species persist. However, other species (e.g., grizzly bears) have not been documented to make long distance movements through marginal habitat areas. For those species that are not inclined to make long-distance interterritorial movements, maintaining breeding habitat for at least a few individuals in the linkage area may be necessary to achieve a functional linkage between blocks of habitat supporting larger groups of animals.

For these reasons and because different species have different habitat needs for travel, evaluating landscape permeability needs to be on a species by species basis—which is what Singleton and his fellow researchers do in their study.

Fracture zones can be relatively small such as an interstate highway and associated development between wild mountain ranges, or moderately sized such as the agribusiness-dominated Central Valley of California. Singleton and company write of Washington, “fracture zones between…blocks of habitat generally correspond to developed valley bottoms where forest cover is often discontinuous, where human population centers are usually located, and where road densities are often high.”

Of course, fracture zones can also be huge, such as the U.S. Midwest (excepting the Upper Great Lakes region).

One does not need to be a professional geographer or carnivore biologist to know that large areas of North America are simply not now suitable for rewilding, at least not in the foreseeable future. Dense human populations, intensive agriculture, and a domesticated landscape make rewilding highly unlikely for much of the U.S. East, Midwest, and South. Large areas in the West are also unsuitable. Other highly settled and domesticated areas unsuitable for rewilding are in southern Canada and in much of Mexico and Central America.

(Adapted from Rewilding North America by Dave Foreman [chapters 6 and 8]. Copyright © 2004 by the author. Reproduced by permission of Island Press, Washington, D.C. Quotes are from the papers below.)

To see the Polish translation of this page go to: http://www.autoteiledirekt.de/science/przepuszczalnosc-krajobraz

The Fragmented Forest: Island Biogeography Theory and the Preservation of Biotic Diversity by Larry Harris (University of Chicago Press, 1984). This is a conservation biology classic by a great pioneer in conservation biology. Harris applies island biogeography to forest management in the Pacific Northwest. Illustrated. Order from Amazon.

Available as a PDF:

PDFs not yet available: