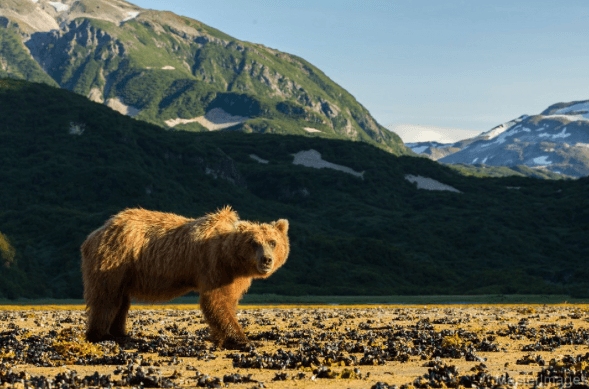 The Wisdom of Bears and the Perfidy of Bureaucracy

One of the first cognitive ethologists to study bears was Barrie Gilbert, as detailed in his 2019 memoir One of Us: A Biologist’s Walk Among Bears. It recounts his experiences researching black and grizzly bears in Yosemite, Yellowstone and Katmai National Parks, beginning in the 1970’s when a grizzly tore off half his face. Like Rachel Mazur’s journalistic book Speaking of Bears, this autobiography by Gilbert focuses on (a) how the primate-level intelligence of bears has allowed them to innovatively adapt to challenges of the natural world and of coexistence with humans.  (b) They both explain how ursid intelligence creates conflicts with humans and outwits attempts to curb those conflicts. (c) Both authors also expose the bureaucratic, political and public relations hurdles involved in minimizing conflicts.

Gilbert and his students were among the first biologists to apply the developing science of cognitive ethology to understanding and solving human-wildlife conflicts. It was also Gilbert who invented (but did not patent) the bear resistant plastic food barrels which have become so popular among hikers and campers throughout bear habitat.

Dealing with food-conditioned bears is just the start of his discussion on bear cognition and cultural transmission of information on where, when, and how to obtain food. Bears commonly learn a wide variety of foods which are only seasonally abundant, often in widely-scattered locations, including sea bird colonies on islands which lie up to thirty miles offshore in Alaska. In theory, salmon might be caught using just a single technique anywhere that bears find these fish. However, seasonal and geographic variations in fishing conditions may force bears to employ a variety of techniques; and individuals develop their own idiosyncratic styles which are sometimes passed along to their cubs through observational learning. There is also evidence that bears self-medicate, for instance to flush parasites from their intestines; and that bears use rudimentary tools (as I have personally documented).

Just as bear traditions can perpetuate behaviours that conflict with humans, and behaviours that adapt bears to their natural environment, they can perpetuate behaviours that adapt bears to coexistence with humans – as has also been documented in other mammals, including elephants and cetacea (Gilbert’s first research experience was with dolphins). As I personally have been arguing since my own youth as a marine ecologist, it is not sufficient to conserve the genetic diversity that allows animals to adapt to variable environmental conditions. Wildlife stewards should also strive to conserve adaptive cultural traits and the social behaviours that foster cultural adaptability. As is now widely recognized among evolutionary biologists, cultural adaptations can select for supportive genetic adaptations.

Difficulties of managing bears without killing them are compounded by (a) conflicting bureaucratic siege mentalities which see any challenge to status quo policies as a challenge to their authority and credibility, (b) political pressure from businesses – e.g., park concessionaires, lodges, air taxi companies – which grow fat off profits from park visitation, and are less concerned with long-term sustainability than with maximizing short-term gains; and (c) pressure from the public who want to use national parks for watching wildlife, mountain biking, fishing, hiking, and a diversity of other activities which sometimes conflict with the National Park Service Organic Act mandate to conserve natural conditions. Mazur recalls several instances where success in curbing bear conflicts misled administrators into assuming that the solutions were permanent, whereupon funding was cut, then conflicts exploded again. Gilbert recounts a diversity of other problems arising from administrators deliberately ignoring the advice of biologists in order to accommodate politically powerful businesses and user groups. This is nowhere more obvious than in continued development of visitor facilities in prime bear habitat, despite its impacts on bears and bear-human coexistence.

Gilbert long ago concluded that NPS administrators needed strong public support if they were to fulfill their Organic Act conservation mandate, even where doing so required making politically incorrect decisions. In an effort to counter pressures from businesses and user groups unconcerned about long-term ecosystem sustainability, Gilbert has allied himself with fellow biologists (e.g., Rachel Mazur, David Mattson and Brian Horejsi), as well as activists such as Louisa Willcox and Doug Peacock who make sure that valid scientific findings are not tucked under the rug, obscured by pseudoscience, or ignored. For this, he has paid a very heavy price, both personally and professionally.

Despite being mauled by bureaucrats even more severely than by a grizzly bear, Gilbert has never been beaten, never bowed, never surrendered, never broken. His life and work will hopefully inspire a new generation of eco-activists and conservation biologists.

Following studies on black bears in Northern California during 1969, Steve became one of the first biologists to earn his PhD studying grizzly/brown bears in North America — in part by analyzing demographic data collected by the field’s pioneers Drs. John and Frank Craighead.  His study focused on ways in which adult male bears (boars) affect production and survival of cubs.

Over the ensuing two decades, Steve has remained interested in the Yellowstone population because of its precarious viability though population studies are now a smaller component of Steve’s research, which focuses on bear behavior, especially aggression, communication, reproduction, and maternal care.

Early in his career, Steve studied the behavior of grizzly/brown bears on the Alaska Peninsula, and of black bears in Interior Alaska.  He also studied population ecology and behavior of moose in Alaska and of red deer (elk), roe deer, and chamois (mountain goats) in the Tirolean Alps of Austria.  He earned a Masters degree in Wildlife Management and a Bachelors degree in Biological Oceanography — with minors in physical sciences, math, and philosophy of science.
______________________________