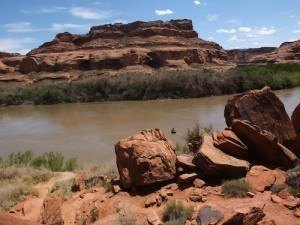 “So there we were, a sun-baked bunch of veteran conservationists and river guides, paddling the Green, exploring side canyons, and plotting strategies to save the wild West…”

People are tribal by nature, and though it’s incumbent upon conservationists to reach beyond our comfortable community to others who do not yet see the value of wild places, a week among friends in some safely wild place is a most welcome rest.  (It is all the more relief when your way there involved, in consecutive days, 65 miles of rough riding to and through Capitol Reef National Park; 7000 feet of climbing, by mountain bike then boot, over the Henry Mountains; a 40-mile ride in mid-day sun through treeless Great Basin Desert; two days in deep mud and on sheer rock in Dirty Devil and Robbers Roost Canyons; then – hardest to endure—a drive with colleagues through Tavaputs Plateau land being sliced up by oil & gas development.)  No need to convince fellow members of the conservation community—leaders with Grand Canyon Wildlands Council, Wild Utah Project, Sierra Club, Center for Biological Diversity, Tutuaca Mountain School, Western Wildlife Conservancy, and river guides—that the Desolation Canyon Wilderness Study Area and surrounding wild country all deserves protection.

There is an urgent need, though, to actually put that protection in place soon, for energy development is rapidly encroaching.  When I last paddled this stretch of the Colorado River’s largest tributary, two decades ago, the long bumpy dirt road to the put in at Sand Wash went through heavily grazed but otherwise undeveloped sagebrush scrub. Now roads and oil rigs have cut up the land from Wyton to within a few miles of the river.  Desolation Canyon WSA has been awaiting formal protection—as would be accomplished through America’s Redrock Wilderness Act (see websites of Wild Utah Project and Southern Utah Wilderness Alliance)—for decades; and all of the larger Book Cliffs roadless area (700,000+ acres), through which this part of the Green flows, is a critical core in a future Western Wildway.   (See websites of Wild Utah Project and Southern Utah Wilderness Alliance.) Southward, down-river, Labyrinth Canyon remains, arguably, the most spectacular unprotected canyon in the West, which lack of protection would be remedied by the proposed Greater Canyonlands National Monument, another wild core critical to protection of the Spine of the Continent.  (Look up and join Sierra Club’s Our Wild America campaign.) 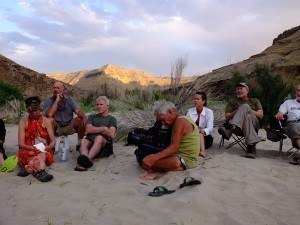 So there we were, a sun-baked bunch of veteran conservationists and river guides, paddling the Green, exploring side canyons, and plotting strategies to save the wild West.  After days alternating between placidly floating through sublime canyon scenery and carefully negotiating lively rapids (some of the waves nearly swallowing my little packraft!), we’d sit in the beach sand and hear from conservation legends like Michael Soule and Kim Crumbo, and brainstorm on how to realize their grand visions.  We agreed that most Americans want spectacular places to be protected, particularly southern Utah’s redrock wilderness, but few are aware of the threats, like oil & gas development, to those places; even fewer bother to take action to defend such remnants of our natural heritage.  We agreed also that personalizing wildlife and wildlands with stories is critical.  That’s part of what we’re doing with TrekWest.  People can relate to heroic big wide-ranging animals as individuals more easily than they can identify with wildlife species as a vague collection of others.  For instance, people may sympathize more with the lone wolves who have somehow gotten across major roads and traveled south from Yellowstone as far as Colorado than they do with Canis lupus as an endangered species.  They may feel more empathy with that lonely male wolverine who has been looking for a mate in western Colorado for months, after the long trek south from the Northern Rockies, than they do with that remote abstraction Gulo gulo.

These big animals are critical but seldom seen parts of western watersheds.  I suspect at least one cougar watched our noisy party.  Photographer Kristen Caldon and I on a side hike up Cedar Ridge Canyon found some of the biggest cat tracks either of us had ever seen: a cougar bigger than my 160 pounds, I suspect, and immeasurably stronger.  Bighorn sheep allowed us to see them at least once a day, mostly ewes and a few lambs.  Paula Mackay (whose post- trip blog was a tremendous gift) found black bear tracks on a beach on river-left.  Elk droppings were liberally scattered about the bench-lands above Three Fords, from herds that winter down near the river and by now are above on the cooler plateau. I espied a golden eagle soaring high along the huge cliffs on river-right, a Great blue heron with chicks and even as a western grebe sculled above a big rapid about to toss around our flotilla. 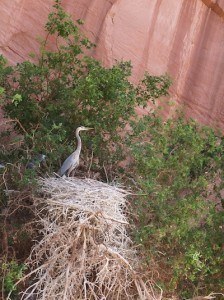 Our conclusions from evening seminars were nearly as wide-ranging and idealistic as the young dispersing wolves and cougars with whom we hope to create a safer world.  We agreed to redouble our efforts to convince the Obama Administration to designate the Grand Canyon Watershed and Greater Canyonlands National Monuments.  Cindy Tolle’s sons, Eli and Levi, 14 and 12, gamely volunteered to use social media to get their friends to write letters in support of these monuments, which would protect wildlife habitat and outdoor recreation opportunities in two of America’s most spectacular landscapes for their generation and long beyond.  We also agreed to explore creating a forum, perhaps something along the lines of an electronic Wild Earth magazine, to better connect conservationists with each other, broaden our outreach, and tell stories of wildways and the creatures wandering them. 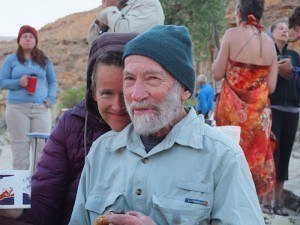 We promised our beloved friend and mentor Michael Soule (pictured right) that we would not rest till his beloved Spine of the Continent is safe for wolves and walkers, pumas and paddlers, aspens and anglers, eagles and birders, lizards and the kids who love to watch them, from Mexico’s Sierra Madre through Alaska’s Brooks Range.

For the Wild West,