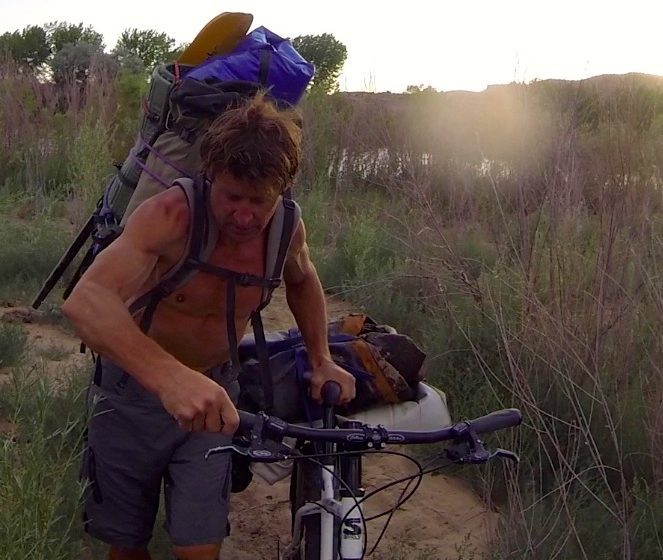 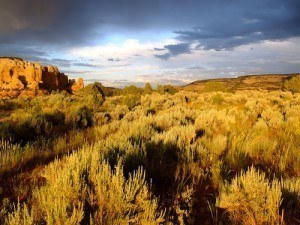 The western Colorado ranch was fairly glowing with romance.  Being of New England academic heritage, I could not help but blush, as flowers, willows, rose bushes, bees, hummingbirds, and nighthawks did their wild things.  Tagging along with my hiking buddy Kenyon Fields and his classy bride Mary Conover, owner of the ranch we were traversing, I tried to make myself even scarcer than usual.   Kenyon and Mary had recently pledged themselves to each other in Labyrinth Canyon, Green River, while the rest of us TrekWesters naively worried that their little inflatable kayak might have deflated.  (We trekkers later agreed: you have to hand it to Kenyon: who else would dare ask for the hand of a gorgeous cosmopolitan woman like Mary in a half-leaky boat that looked to be afflicted with gout?!)

A decade or so ago, my Adirondack conservation mentor and friend Gary Randorf wrote a book about New York’s Adirondack Park with the prescient title Wild Island of Hope.  Following Gary’s lead in the East’s wildest landscape, I’ve written elsewhere about the conservation imperative of restoring and protecting habitat connections from this great eastern park to other eastern wildlands.  This blog is not about wildlands recovery in the East, though, but about wild love in the West.  I’m on TrekWest now, trying to help rekindle connections between wild places and their champions all along the Rockies and beyond.

Another dear friend, Tom Butler, wrote a powerful book about wild places saved through private resources, Wildlands Philanthropy, in which he rightly points out that conservation success stories are essentially love stories.   Mountain Island Ranch is one of those great love stories.   For Mary Conover and Kenyon Fields have the sort of deep, abiding love—for each other and for the land–that could save our beleaguered country.  Mary and Kenyon are among the wildlands philanthropists who will keep hope alive, through this century of climate chaos.  More tangibly, they are protecting a key stepping stone on the path toward protection of the Spine of the Continent, toward creation of a Western Wildway.

When not distracted by Mary and Kenyon’s enviable romance (pictures to follow when they slow down!), what did I see amid the towering riparian cottonwoods, the even taller redrock cliffs, the juniper/pinyon-clad mesa, and the montane aspen/oak woodlands of Mountain Island Ranch? I saw two nests of bald eagle families: four adults and four young, each nest just a short flight away from the Colorado River, where the adults were catching fish for their chicks.  I found sign of cougar, black bear, bobcat, and coyote.  I enjoyed watching loving pairs or whole families of dusky grouse, green-tailed towhee, gnatcatchers, warblers, and many other birds less noticeable but nearly as elegant as the eagles.  I admired wildflowers too diverse for me to identify and almost too colorful to believe.

Besides that beautiful blossoming romance between artist Mary Conover and activist Kenyon Fields, there’s another sort of love here to celebrate: the love of people for their land.  Mary and her son Nick and her ranch manager Belle and Belle’s son Sam love their land in the sort of durable way that keeps it safe through the generations.  Kenyon is quickly falling in love with this land, too.  I had the unforeseeably unique chance to backpack across Mountain Island Ranch with Kenyon 15 months ago, when we were scouting for TrekWest, and Mary and Kenyon were just cautiously, quietly admiring each other from afar with no notion yet that their lives were about to entwine.  Kenyon was clearly already taken by the radiant beauty of this sunny, wild place (and mentioned to me repeatedly the matching, blonde beauty of its owner, whom I’d not yet met!), and within a few hours of starting down the Little Dolores River afoot, I too was enamored of these rocky canyons and lofty mesas.

Keeping private lands in the West green on the ground yet black on the books is difficult, though.  Making a living without degrading the land is becoming an even greater challenge as drought deepens.  As with many private land-holdings managed with conservation in mind, West and East, outside income is necessary to balance the books, for the markets and tax systems of our country do not properly reward landowners for good stewardship.  Foreseeing these management challenges, Mary years ago put perpetual protection on her family’s land through conservation easements with Mesa Land Trust.  Belle and her son organically raise on the land modest numbers of cattle for sale to buyers who supply health food stores.  Nick, with his inordinately green thumbs and three close friends, is expanding the organic gardens and selling produce through nearby farmers markets.

Mary has wondered about enhancing the economic viability of the ranch by offering educational programs here – and here is so spectacular that a natural retreat of some sort would seem a promising venture.  Scenically, Mountain Island Ranch is of National Park quality, but without the crowds, cars, and loop roads; and Mary intends to keep it a quiet, private place.

This trip, Kenyon and I had reached Mountain Island Ranch the back way:  We loaded our bikes and packs in our rafts and swam the flotilla across the Colorado River from Westwater.  We must have looked a sight:  my packraft a glorified blue inner-tube, as Kenyon called it (I prefer the name Dave Foreman gave it: Phalarope, for its light bird-like spinning agility!), and Kenyon’s inflatable kayak holding too much air in one chamber and barely any in the other, making it woefully lopsided!  Pile on top of the tiny raft and misshapen kayak mountain bikes (mine with tires so fat, it’s nearly a water-craft, too), expedition backpacks, paddles, one impersonal flotation device, and assorted cordage, and you get the picture.  Our comical crossing, which Kenyon had proposed and I’d reluctantly accepted (why not paddle the boats?, I’d too logically wondered), was generously rewarded by the sights and sounds of the two Bald eagle families nesting near the river.

Later, while Mary, Kenyon, and Belle discussed resting some fields from grazing during the ongoing drought, I rambled up Seiber Canyon and then up (through an edgy break in the cliffs) to a great juniper/pinyon-clad mesa.  In a wash, I found a deer carcass that likely fed a cougar, and a big bear track nearby.  Atop the mesa, prickly pear cacti were blooming in bright yellows and pinks; and several jackrabbits galloped away from me.

When I returned to the ranch house, Mary and Kenyon were ready to drive up to “The Mountain,” the expansive montane part of the ranch, above 9000 feet elevation, and bejeweled with streams and ponds.  Although I could have felt like I was intruding on a honeymoon — so splendid the views across the Dolores River to Utah’s LaSal Mountains (which, to add to the drama, were billowing smoke from a wildfire) and so spectacular the sunset from their camp porch — Mary and Kenyon were here for business. Sipping wine, we talked late into the night about how to keep private wildlands like these intact.  (On a much smaller scale, I know similar challenges as a conservation land-owner and volunteer land steward of Northeast Wilderness Trust and Eddy Foundation lands in Split Rock Wildway, in New York’s Adirondacks.)

The lessons I drew here at Mountain Island Ranch, complementing those I’d gleaned a week before at High Lonesome Ranch, on the other side of the Colorado River, will fill at least a chapter of a TrekWest book (if enough of you will buy the TrekEast books, Big, Wild, and Connected, from Island Press!), but for now, I quickly mention these (and I emphasize, as always, these are my interpretations as a scout, not necessarily endorsed by anyone else, but helpful as food for thought, I hope, for fellow supporters of a Western Wildway):

Freedom to Rest – Kenyon’s apt term captures the need for conservation-minded grazing permittees to be free to rest their leased lands from livestock without fear of losing their permits.

Economic Diversification — Too much of the arid West is heavily, harmfully grazed by livestock because “cows put kids through college,” as a ranch manager I’d met earlier put it.  Creative businesses and government entities need to encourage wildlife-friendly livelihoods for landowners, which may include eco-lodges and Nature tourism, guided hunts and angling for naturally abundant native species, mountain bike safaris, organic gardens and CSAs (community-supported agriculture operations), farm to table restaurants (like the delectable Hell’s Backbone Grill in Boulder, Utah; see Blog 33), environmental education, and payments for ecosystem services, including carbon sequestration.

Kenyon and I needed to head to Durango for meetings, so we all reluctantly descended the mountain.  The afternoon before Kenyon and I biked down to the river, and swam our flotilla back across, though, we three took time for a side hike to the Little Dolores River.  There, on a part of vast Mountain Island Ranch that even Mary is only lately getting to know, we swam in lovely pools flanked by beaver-trimmed trees and shiny basalt cliffs.  Between swims, we happened upon a quarter-sized hummingbird nest in a small oak tree near the river, while frogs sang, a nighthawk swooped and buzzed down above, and raptors soared past. 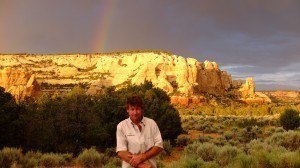 Then rain clouds formed over distant National Forest lands, the dark clouds intermingling with setting sunshine in a light show to rival any.  As I tried to key-out flowers highlighted by sunbeams, a full rainbow, then a double rainbow, arced over Mary and Kenyon, affirming that their love for each other and the land will endure.