By Rewilding on July 27th, 2018 in Actions & Bulletins, Featured 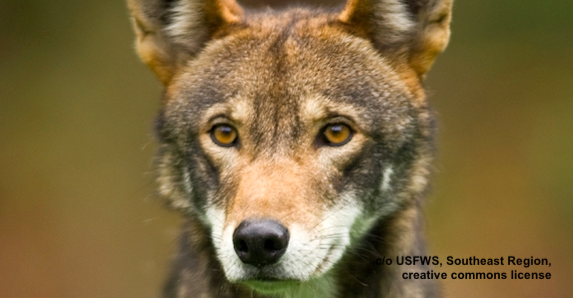 On June 28, the US Fish and Wildlife Service (USFWS) announced a proposal that would devastate the world’s only population of wild red wolves, now reduced to fewer than 30 individuals. The proposal seeks to shrink the red wolf recovery area by 90 percent, to land within the Alligator River National Wildlife Refuge and the adjacent Dare County Bombing Range–land that has the capacity to support fewer than 15 wolves. It would also allow any wolves who left this restricted area and ventured onto private or state lands to be shot without consequence.

The red wolf recovery program was once a model of success. By 2006, an estimated 130-150 wolves roamed the five-county recovery area. These naturally reclusive animals threatened neither humans nor livestock. Rather, they preyed on animals such as the nutria–which the state has spent millions to eradicate–while keeping the coyote population in check.

Despite this early success, the agency has chosen not only to ignore the recommendations of expert biologists and abandon the red wolf recovery program, but also to sanction the slaughter of these endangered animals.

What You Can Do

Please contact the USFWS and let it know that you oppose the agency’s proposed rule change that would (1) limit red wolves to the Alligator River National Wildlife Refuge and the Dare County Bombing Range and (2) allow wolves who stray from this restricted area to be killed. (Note: When you submit comments through AWI’s website, your name and comments will be publicly viewable on the official comment page at Regulations.gov.) You may also submit your comments directly at https://www.regulations.gov/comment?D=FWS-R4-ES-2018-0035-0001. Comments must be submitted by July 30. Be sure to share our “Dear Humanitarian” eAlert with family, friends and co-workers, and encourage them to submit comments as well. As always, thank you very much for your dedication to protecting animals!

We gratefully appreciate the Animal Welfare Institute for allowing us to feature their important red wolf alert on our website.  In addition, below, we’re listing some talking points to help readers as they submit comments, which are due by Monday, July 30.  ~editors