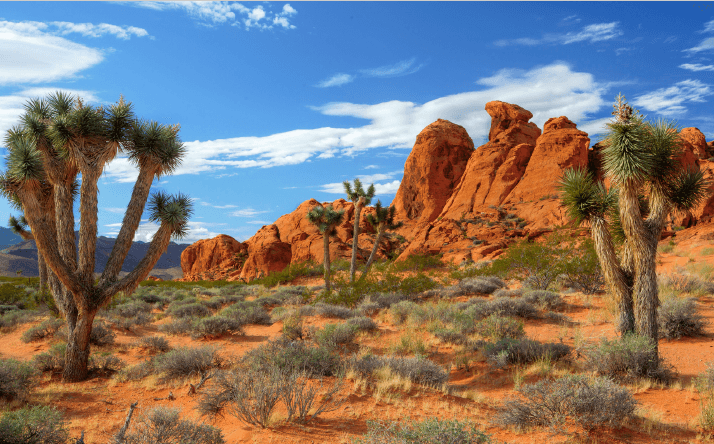 Using the Bundys for Good: Finding the Silver Lining for Public Lands

(Editors’ note: Public lands conservation veteran and gadfly Andy Kerr sees the Bundy band as both an existential threat and an existential opportunity for America’s public lands. This article is adapted from the fourth of four Public Lands Blog posts that examine the government mishandling of the Bundys, the Bundys’ legal troublemaking, and the opportunities for the conservation community to apply political jujitsu on Bundy et al. to advance the conservation of America’s public lands. To see Andy’s earlier blogs and get on his list for future ones, see links below.)

Don’t tell anyone, but the more the Bundys—especially the patriarch, Cliven—talk, the better off are America’s public lands.

This is true even if Cliven doesn’t again go off-script and full-on racist by saying things like: “And I’ve often wondered, are they better off as slaves, picking cotton and having a family life and doing things, or are they better off under government subsidy?” The more the Bundyites spout their bunk about the illegitimacy of the federal public lands—if not also the federal government itself—the more the overwhelming majority of Americans remember they love America’s public lands. This is similar to how the Trump administration’s dismembering of two national monuments in Utah (and perhaps more soon in other states)—an action that is highly likely to be found illegal—has made more Americans aware of the existence of, and their love for, national monuments.

Cliven Bundy’s livestock are trespassing in and near Gold Butte National Monument. The presidential proclamation of the monument says, “Livestock grazing has not been permitted in the monument area since 1998 and the Secretary shall not issue any new grazing permits or leases on lands within the monument.” Source: Bureau of Land Management.

A Dog That Don’t Hunt

Now free of the threat of federal criminal prosecution, the Bundy boys are getting some speaking gigs to tell their story, brag about how they beat the feds and how they are continuing to do so by not paying federal grazing fees, and interpret the US Constitution’s property clause in ways that no federal judge nor any credible law professor ever has (my lay analysis here). The Bundy boys are basking in the adulation of fellow true believers, mitigating the lonely times in jail awaiting trial.

Speaking of law professors, the extremely credible John D Leshy of the Hastings School of Law has recently published an exhaustive takedown of the cockamamie constitutional contentions of Bundy and his ilk in a law review article entitled “Are U.S. Public Lands Unconstitutional?” Here is the abstract:

Arguments are sometimes made—most recently in a paper commissioned by the State of Utah, and by a lawyer for a defendant facing charges for the armed takeover of a National Wildlife Refuge in Oregon in 2016—that U.S. public lands are unconstitutional. This Article disputes that position. It digs deeply into the history of the public lands, going back to the very founding of the nation. It seeks to show that the arguments for unconstitutionality reflect an incomplete, defective understanding of U.S. legal and political history; an extremely selective, skewed reading of numerous Supreme Court decisions and federal statutes; a misleading assertion that states have very limited governing authority over activities taking place on U.S. public lands; and even a misuse of the dictionary. At bottom, the arguments rest on the premise that the U.S. Supreme Court should use the U.S. Constitution to determine how much if any land the U.S. may own in any state. For the Court to assume that responsibility would be a breathtaking departure from more than 225 years of practice during which Congress has made that determination through the political process, and from a century and a half of Supreme Court precedent deferring to Congress. It would also be contrary to the Court’s often expressed reluctance to revisit settled public land law, upon which so many property transactions depend.

It’s 84 pages (and 559 footnotes; the true measure of a law review article) and reads like the law review piece that it is. However, woven in Leshy’s legal critique is an informative legal history of public lands, Leshy takes no prisoners.

From a political standpoint, the number of Bundyites is infinitesimally small. The Bundys’ speaking gigs will likely be limited to the largest possible venues in the very smallest towns in the far outback of the American West. Their Bundyian bunk is extreme, wrong, and contrary to what the vast majority of the American people believe. It is a dog that don’t hunt. There is an upside to the assaults on public lands staged by President Donald Trump, Secretary of the Interior Ryan Zinke, and delusional citizen Cliven Bundy: The assaults are forcing Americans to stand up for their public lands for the benefit of themselves and future generations. The challenge to the conservation community is to channel the reaction to such assaults into more enduring protections for America’s public lands.

1. Remind your federal elected officials of how much you value your federal public lands and ask them to establish and implement higher levels of conservation protection and management.

2. Give money and/or time to conservation organizations that are holding the Bundy gang to account.

3. Submit letters to the editor or opinion pieces to your local newspaper pointing out the flaws in Bundyite thinking and the benefits of public lands.

4. Demand that Interior Secretary Ryan Zinke do what his five predecessors (three Democrats and two Republicans) have not done: put an end to more than two decades of illegal grazing on federal public lands by Cliven Bundy’s cattle.

5. Remind your state elected officials of how much you value your federal public lands and ask them to support higher levels of conservation protection.

6. Give money and/or time to organizations that are working to elevate the conservation status of federal public lands by changing national policies toward them and/or seeking the establishment of additional wilderness areas, wild and scenic rivers, national conservation areas, national parks, and national monuments.

7. If a Bundy family member or a Bundy fanboy or fangirl appears at an event anywhere near you, go and make your disdain known in a civil manner.

8. Meet with the editorial board of your local newspaper and urge them to editorialize in support of federal public lands being conserved for the benefit of this and future generations.

9. Regularly post to your social media of choice on behalf of federal public lands.

10. Get out and enjoy some of your federal public lands and take friends with you.

11. Give money and/or time to conservation organizations that are defending Grand Staircase-Escalante, Bears Ears, Gold Butte and other national monuments proclaimed by Presidents Clinton, G.W. Bush, and Obama and under threat from President Trump. 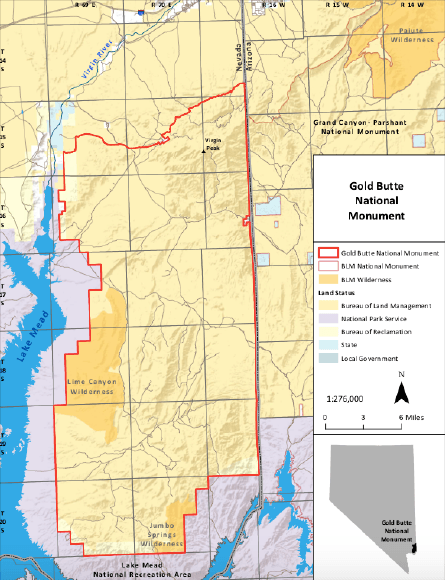 Gold Butte National Monument (proclaimed by President Obama in 2016) is bounded to the west and south by Lake Mead National Recreation Area (established by Congress in 1936) and to the east by Grand Canyon–Parashant National Monument (proclaimed by President Clinton in 2000). The unincorporated census tract known as Bunkerville is near Mesquite, Nevada, near Interstate 15. Source: Bureau of Land Management.

The Bundys and their ilk are but a small carbuncle on the butt of our great nation—annoying but treatable. If treated properly, this puny band of boils will go away. Alas, sometimes treatments take longer than they should. However, after one recovers from an acute illness, life is always sweeter.