Victory in the Southern Ocean Day for the Whales 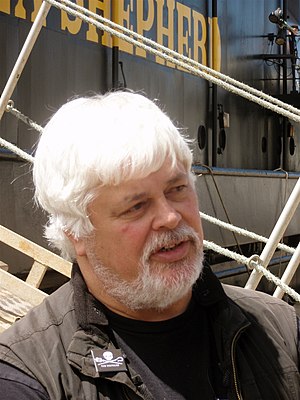 It’s official – The Japanese whaling fleet has called it quits in the Southern Ocean. At least for this season. If they return next season the Sea Shepherd Conservation Society will be ready to resume our efforts to obstruct and disable Japanese whaling operations.

“The Nisshin Maru made a significant course change immediately after the Japanese government made it official that the whaling fleet has been recalled.” Said Captain Alex Cornelissen from the Bob Barker. “She looks like she’s going home!”

The Sea Shepherd ship Bob Barker has been tailing the Japanese factory ship Nisshin Maru since February 9th making it impossible for the whalers to continue their whaling operations.

“I have a crew of 88 very happy people from 23 different nations including Japan and they are absolutely thrilled that the whalers are heading home and the Southern Ocean Whale Sanctuary is now indeed a real sanctuary.” Said Captain Paul Watson.

The Sea Shepherd ships Steve Irwin, Bob Barker and Gojira will remain in the Southern Ocean to escort the Japanese ships northward. “We will not leave the whale sanctuary until the last whaling ship has departed,” said Gojira captain Locky MacLean.

“This is a great victory for the whales,” said Captain Paul Watson, “but we did not do this alone. Without the support of the people of Australia and New Zealand we would not have been able to send voyages out for seven seasons from Australian and New Zealand ports. We are grateful to Senator Bob Brown and the Australian Green Party. We are very grateful to Bob Barker for giving us the ship that turned the tide in our efforts to force the Japanese fleet from these waters. We are grateful to all our shore volunteers and our supporting members. We are grateful to the Chilean Navy and the government of France for their support. It is a very happy day for people everywhere who love whales and our oceans.”

It’s official – the killing of whales in the Southern Ocean Whale Sanctuary is over for this season and the whalers did not take even 10% of their quota. Sea Sea Shepherd estimates that over 900 whales have been saved this year.