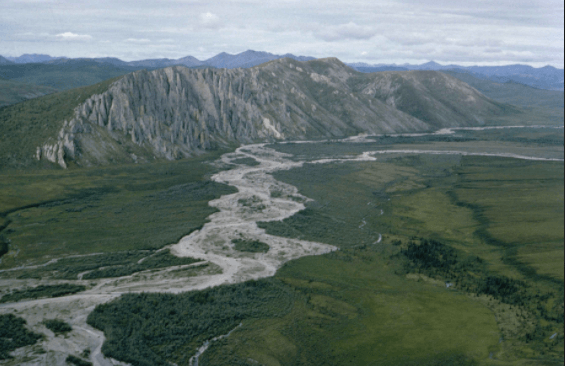 Wall Street Is Bending to Pressure to Halt Arctic-Drilling Loans

Activists trying to keep rigs out of the Arctic National Wildlife Refuge are now focused on choking off the flow of money needed to exploit the reserve. As big as South Carolina, it is home to caribou and grizzlies — and possibly billions of barrels of oil.

The strategy is paying off. Morgan Stanley just ruled out financing Arctic oil and gas development, becoming the fifth major U.S. bank to announce it will no longer support drilling in one of the fastest-warming places on the globe. That followed similar moves from Citigroup Inc. earlier this week and from Goldman Sachs Group Inc., JPMorgan Chase & Co., and Wells Fargo & Co. in the space of four months. Bank of America Corp. is the only major holdout.

Lending restrictions now pose another obstacle to oil companies hunting for the next big U.S. discovery, particularly after an epic collapse in prices, declining demand tied to coronavirus, and a mounting glut of crude. The Interior Department is preparing to sell drilling rights in the 1.56-million-acre coastal plain of the Arctic refuge. However, remote conditions and limited infrastructure in northeast Alaska ratchet up the cost of finding and developing crude there, making it even less attractive to oil producers in this economy.

“We have been speaking out about the need to keep drill rigs out of our sacred lands in the Arctic Refuge, and it’s amazing that a growing number of major banks are listening,” said Bernadette Demientieff, head of the Gwich’in Steering Committee that represents tribes in Alaska and Canada. “The fight to protect this place is far from over, and we will continue to hold accountable any bank, oil company or politician that seeks to benefit from its destruction.”

The bank declarations underscore the potential peril for companies with ties to controversial fossil fuel projects amid growing public concern about climate change. The pressure will only increase, both for other banks to follow suit and for lenders to strengthen existing policies to keep fossil fuel projects off limits. Arctic oil opponents are already beginning to target asset managers like BlackRock Inc. and insurance companies such as Liberty Mutual Group Inc.

Oil industry advocates have championed oil development in the Arctic refuge as a way to revive production on Alaska’s North Slope and ensure diverse U.S. sources of crude. They call the effort misguided.

“It is disappointing to see these large corporate banks who do not want to invest in an area like the Alaskan Arctic where we have a track record of responsible development and strong partnerships with the people who live there,” said Kara Moriarty, head of the Alaska Oil and Gas Association. “Yet they continue to invest in projects in countries that do not have the same stringent regulatory policies.”

Arctic drilling opponents warn industrial oil operations would jeopardize a wilderness home to arctic foxes, polar bears, and caribou herds. They seized on the finance-focused approach after the 2016 election of President Donald Trump, who has championed drilling, and the decision by Congress a year later to end a decades-long ban on oil development in the refuge’s coastal plain.

“It was clear that the playbook for keeping the refuge protected was going to need some updating,” said Sierra Club campaign representative Ben Cushing. “The strategy since then has been to try and pull every lever we can to prevent a lease sale from going forward and of course prevent any drilling or seismic testing or development on the coastal plain.”

Financing is one of those levers.

“A fossil fuel project needs three things to go ahead,” said Alison Kirsch, the lead researcher in the Rainforest Action Network’s Climate and Energy Program. “It needs government approval — or a permit — but it also needs capital and it also needs insurance. And those last two pieces mostly happen in the private sector. So if you can intervene there, you can stop projects.”

Activists pressed banking executives about their policies during shareholder meetings and in conversations with sustainability directors. Native Alaskans described to executives in meetings a potential human toll from drilling in lands they use to hunt caribou and reverently call “the sacred place where life begins.” Large shareholders warned lenders they were jeopardizing the climate, their finances, and their reputation by underwriting Arctic drilling campaigns.

There’s a limit to the bank vows, which generally only rule out financing tied to individual projects — such as underwriting a specific Arctic drilling venture. The pledges wouldn’t get in the way of a bank providing broad financing to oil companies that operate mostly in Alaska or the Arctic.

The strategy is most effective at limiting the activity of independent oil companies — such as Hilcorp Energy Co. and Oil Search Ltd. — which are more likely to require external funding. By contrast, large, multinational oil companies generally can rely on their own balance sheets to sustain Arctic oil development and aren’t likely to be squeezed by the new policies.

The effort builds on a previous, successful campaign to persuade banks to swear off funding controversial coal mining operations that involve clearing mountain peaks to expose coal. Bank of America Corp. committed to end loans for so-called mountaintop removal mining in 2008, prompting a wave of other U.S. lenders to follow suit

Banks may be more receptive to the pressure now, after protesters targeted Wells Fargo in 2017 for its role as one of 14 banks that funded a $2.5 billion term loan to the company building the Dakota Access oil pipeline. The project drew opposition from Native American rights supporters and the Standing Rock Sioux, with protests along the oil pipeline’s route in North Dakota. At one point, police sprayed water, fired tear gas and shot rubber bullets at the demonstrators, with videos of the altercations shared widely online.

Banks are more aware than ever that “the cost and the reputational burden is not only borne by the oil and gas companies that built these projects, but it’s also on the banks that finance them,” Cushing said.

Institutional investors with large bank holdings have added heft to the anti-fossil funding campaigns. “We’re not the placard-waving activists, but we like to engage,” said Beau O’Sullivan, with ShareAction, a nonprofit group that has coordinated pension funds and other large investors in pushing banks to phase out fossil fuel financing. “This sort of campaigning works.

Jennifer A. Dolby
Spread Rewilding Around the Globe!

Rewilding in the Media #14