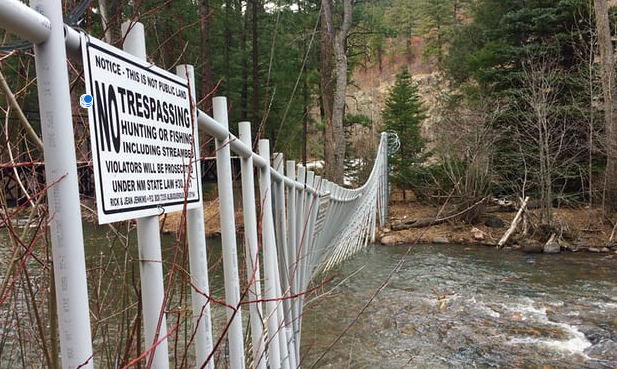 Who Owns Water? US landowners putting barbed wire across rivers

As Scott Carpenter and a few friends paddled down the Pecos river in New Mexico last May, taking advantage of spring run-off, the lead boater yelled out and made a swirling hand motion over his head in the universal signal to pull over to shore. The paddlers eddied out in time to avoid running straight through three strings of barbed wire obstructing the river.

Swinging in the wind, the sign hanging from the fence read “PRIVATE PROPERTY: No Trespassing”.

One member of their party waded into the swift water to lift the wire with a paddle for the others to float under. As they continued downstream, Carpenter, a recreational boater from Albuquerque, looked over his shoulder a see a figure standing outside the big ranch house up the hill. He offered a wave, but received nothing in return.

It’s a scene playing out with increasing frequency in New Mexico, where a recent bid to legally privatize streams has public users like Carpenter more than a little alarmed, not least for the precedent it might set beyond the borders of this western state.

While the fight over US public lands has reached a fever pitch unlike anything seen in recent decades, and the Trump interior department seeks to lease out vast areas to private interests for mining and drilling, the fate of public waterways has largely flown under the radar. Now New Mexico has become a battleground for that very issue, with the state government, landowners, and outfitters on one side of the fight and anglers, boaters, recreationalists and heritage users on the other. At the heart of the argument: who owns the water that has long been considered the lifeblood of the arid west.

Water use rights and access vary by region across the country, though the water itself has always been a public resource for people to fish, paddle, wade and float in. Private landowners have long taken unsanctioned steps to keep the public out of waterways, as in the recent case of an Arizona man convicted of shooting at kayakers boating down a river that runs through his land.

But in the last hours of 2015, efforts to bar public access received official sanction, when New Mexico’s state government quickly and quietly passed a bill that implies private ownership of public waters that run through private land. It was a response to a statement from New Mexico’s then attorney general, Gary King, that the public can wade and fish in streams running through private property, as long as they remain in the stream, which is in line with common doctrine in many states. Landowners and outfitters protested.

The rule remained mostly dormant until late December, when in a special meeting with only 10 days’ notice – just a third of the 30-day standard – the state began a process to allow landowners to certify streambeds as private property.

“Prohibiting access from the public is privatizing what has been historically ours, and the way this happened is chilling,” says Robert Levin, New Mexico director of the American Canoe Association. “The process was hasty and moved through more quickly than it should have been. From a recreation standpoint on this, you start to worry about an erosion of inclusion.”

The Rio Grande river runs through a canyon just outside Los Alamos, New Mexico. ‘Prohibiting access from the public is privatizing what has been historically ours,’ says the director of the American Canoe Association. Photograph: Alamy Stock Photo

Garrett VeneKlasen, 51, grew up fly-fishing the Pecos, a well-known river that cuts across eastern New Mexico, with his father. He remembers when it was possible to walk nearly the entire length of the river without running into fencing. “As long as you were respectful to the landowner and private property, you could pretty much come and go and fish right through that entire watershed,” he recalls. “There was almost no exclusivity.”

But when the experience of fly-fishing became a commodity, things started to shift. VeneKlasen had a front-row seat to the evolution when he landed his first job as a fishing guide at 15 years old. He explains it with an example he’s seen play out on what’s now a fenced section of the Pecos.

“That landowner started out just like any landowner, and he had trout in the stream that runs through his property. He decided to do some in-stream improvements, and the trout fishing got better. Then he started to stock big trout in the section that ran through his land, and feed them so they’re artificially big – and suddenly, you can sell an experience. So he fences the river to keep other people out, and to some extent, to keep those fish in. And just like that, a lifestyle became an industry.”

Dan Perry sees it differently. He bought the first section of his Trout Stalker Ranch in northern New Mexico in 2011, when the Rio Chamita that runs through it flowed Technicolor with toxic magnesium, phosphorus, and other chemicals leaked from the wastewater treatment plant upstream. He worked with the New Mexico governor to secure $8m for a cleanup effort.

“Now there’s clean water coming out of the Chamita,” he says proudly. Perry has easements on the north and south end of his property for public river access, but he restricts the majority of the waterway with a cable across the river hung with a No Trespassing sign. He feels he’s protecting his investment in restoring stream health. “Private property owners are some of the biggest conservation stewards right now,” he says. “I feel like the beauty of our lands and species survival is up to private landowners.”

Many landowners, including Perry, allow private outfitters access to the water they’ve fenced off to the public, bolstering the view of many New Mexicans that this is the latest example of turning public lands over to a wealthy elite and private interests while shutting out the public itself.

“It’s like someone walking into my house without ringing the doorbell and telling me that I can’t sit on my couch any more,” says Steve Polaco, president of the Tierra Amarilla Land Grant, a historic land grant whose heirs have traditionally fished some of the waterways in question.

Public access advocates are already fighting back by working to strike down the law as unconstitutional, but the effort won’t be cheap. “The tragedy is that the public is going to have to spend millions to win back something that was ours in the first place,” says VeneKlasen, “by suing the entity that’s supposed to act in the public’s best interest and be the steward of a public resource.

“The New Mexico department of game and fish is funded by hunting and fishing licenses from people who generally have little means – and it’s going to be using those dollars to fight against the people it’s supposed to protect.”