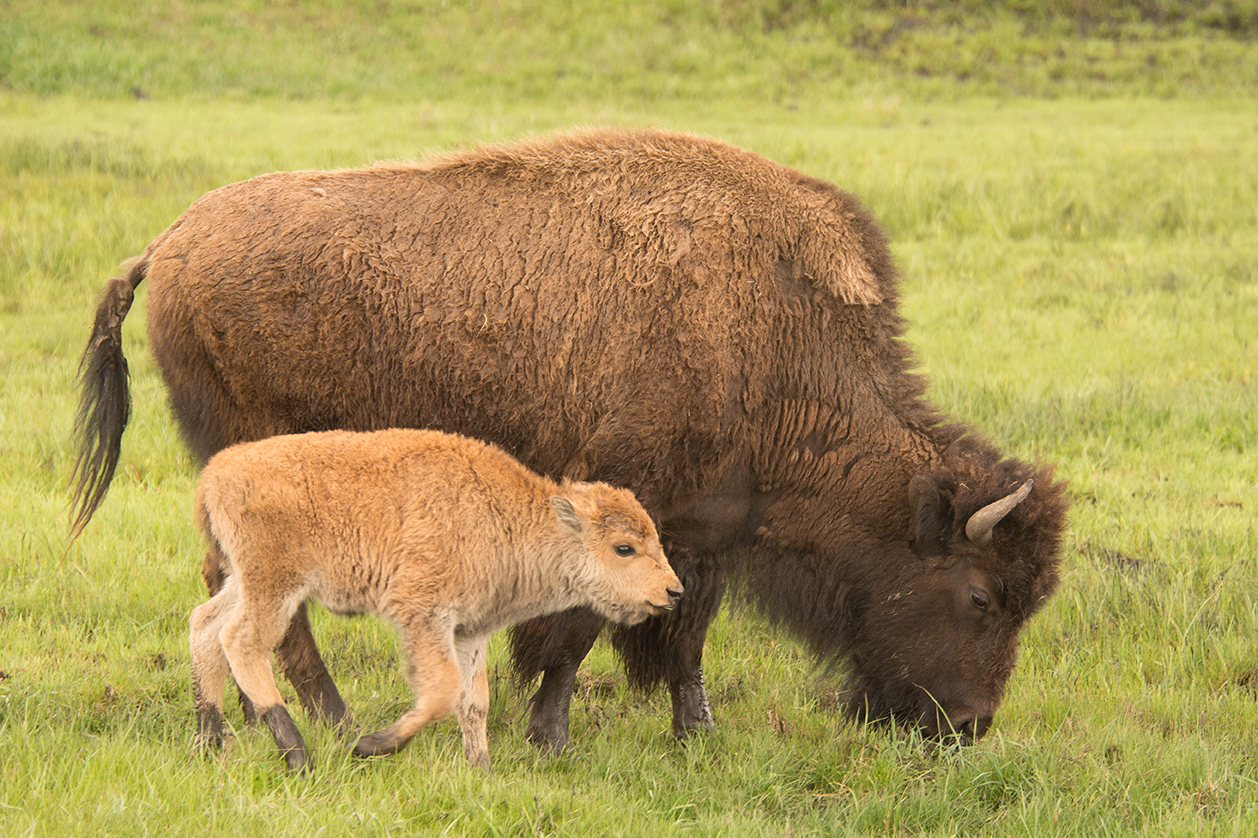 Bison were critical ecosystem influences on grasslands of North America, particularly in the Great Plains “bison belt.” They provided prey or carrion for wolves, grizzlies, other smaller predators and scavengers, and food for humans. In addition, bison grazing patterns influenced vegetation growth and distribution and created mutualistic relationships with wildlife such as prairie dogs.

Due to behavioral and other differences, domestic livestock are no substitute for bison.

Bison were critical to the horse-mounted bison hunting culture of the plains Indians and to their demise by the 1880s. The disappearance of the vast herds of bison shocked or alarmed the American public and helped to foster new wildlife protection policies.

The Lacey Act, which prohibited the possession and transportation of wildlife across state borders, was explicitly enacted to protect bison from poachers in Yellowstone National Park.

Due to overhunting and commercial harvest, bison were extirpated from nearly all their vast range. By 1890 the last wild bison, perhaps only 50, remained in Yellowstone National Park. In addition to the Yellowstone herd, a few remaining wild bison were gathered into 5 or 6 small private herds. However, bison in most or all these herds were cross-bred with domestic cattle. 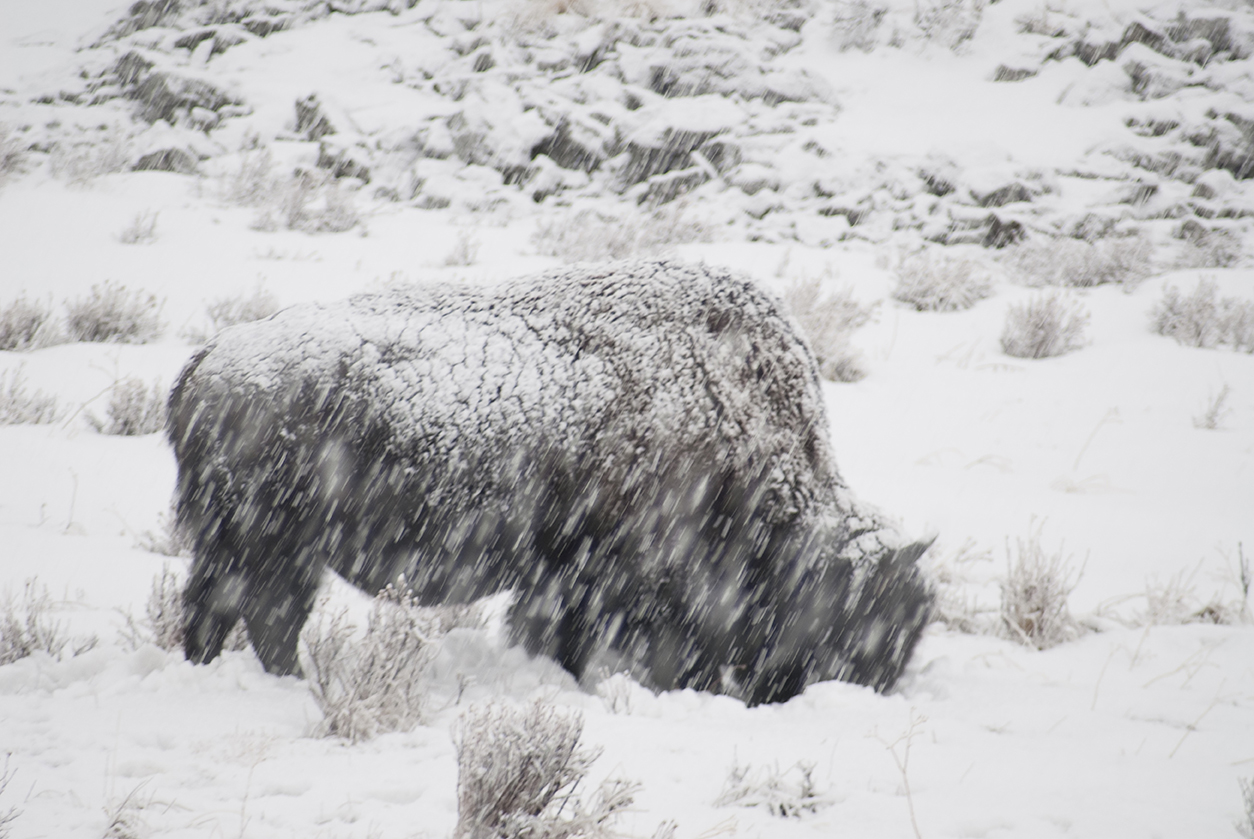 Few of the existing herds outside of Yellowstone National Park are large enough and subject to on-going natural selection such as native predators, variable climate, and other evolutionary influences to preserve wild genes. (Photo (c) George Wuerthner)

Today, there are bison herds in some national parks notably Badlands, Wind Cave, Grand Teton, and Yellowstone, and Theodore Roosevelt; and federal wildlife refuges such as Wichita Mountains. Among these, the Yellowstone herd is the most “wild”, being the largest and influenced by the least amount of domesticating management. Smaller public herds, subject to more intensive and diverse management interventions are being domesticated, with simplification and disorganization of the wild bison genome.

Some bison advocates celebrate the more than 500,000 bison scattered on private ranches and in tribal herds. This is analogous to celebrating hatchery salmon as a substitute for wild salmon restoration.

In most or all of these bison herds, wildness is being compromised. Most have cattle genes. These herds generally are subject to typical livestock management, including supplemental feeding, controlled rotations through pastures, selective culling, and controlled sex—age structure of the herd. None are large enough to preclude degeneration of the wild genome. 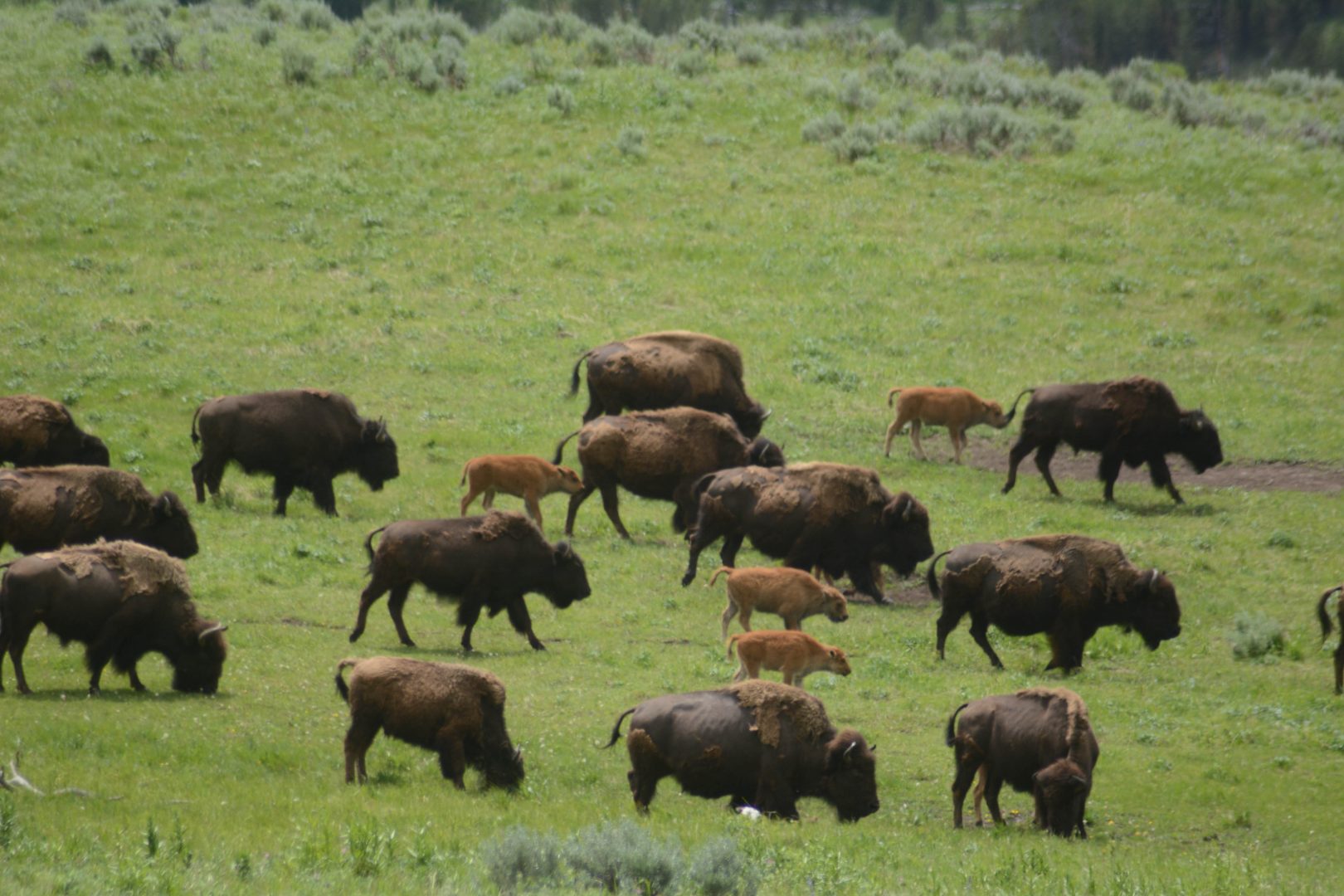 Migration is one of the factors that preserve wild genes. (Photo (c) George Wuerthner)

This culling is not selective for wildness. Indeed, among many captive herds, the most unruly bison are often the first to be eliminated. The migratory tendency of bison is also being eradicated even among Yellowstone’s bison, shot at the park border by tribal gunners or captured for slaughter by the Park Service. This activity is done primarily to preclude the migration of Yellowstone bison out of the park onto private ranchlands.

Due to the small size of most domesticated bison herds and the heavy-handed livestock-oriented management, the genetic traits that could be summed up as “wildness” are being lost. Biologist Jim Bailey has written extensively about this loss.

A problem with many existing bison herds is their small size. Inbreeding depression and genetic drift are issues with small herds. All existing bison herds have been through genetic bottlenecks and thus have lost genetic variability. Considering that even the wilder bison herds such as those in Yellowstone and Utah’s Henry Mountains were started with tiny numbers, there are also likely some losses of genetic diversity even in these herds.

WHAT CONSTITUTES A WILD BISON HERD 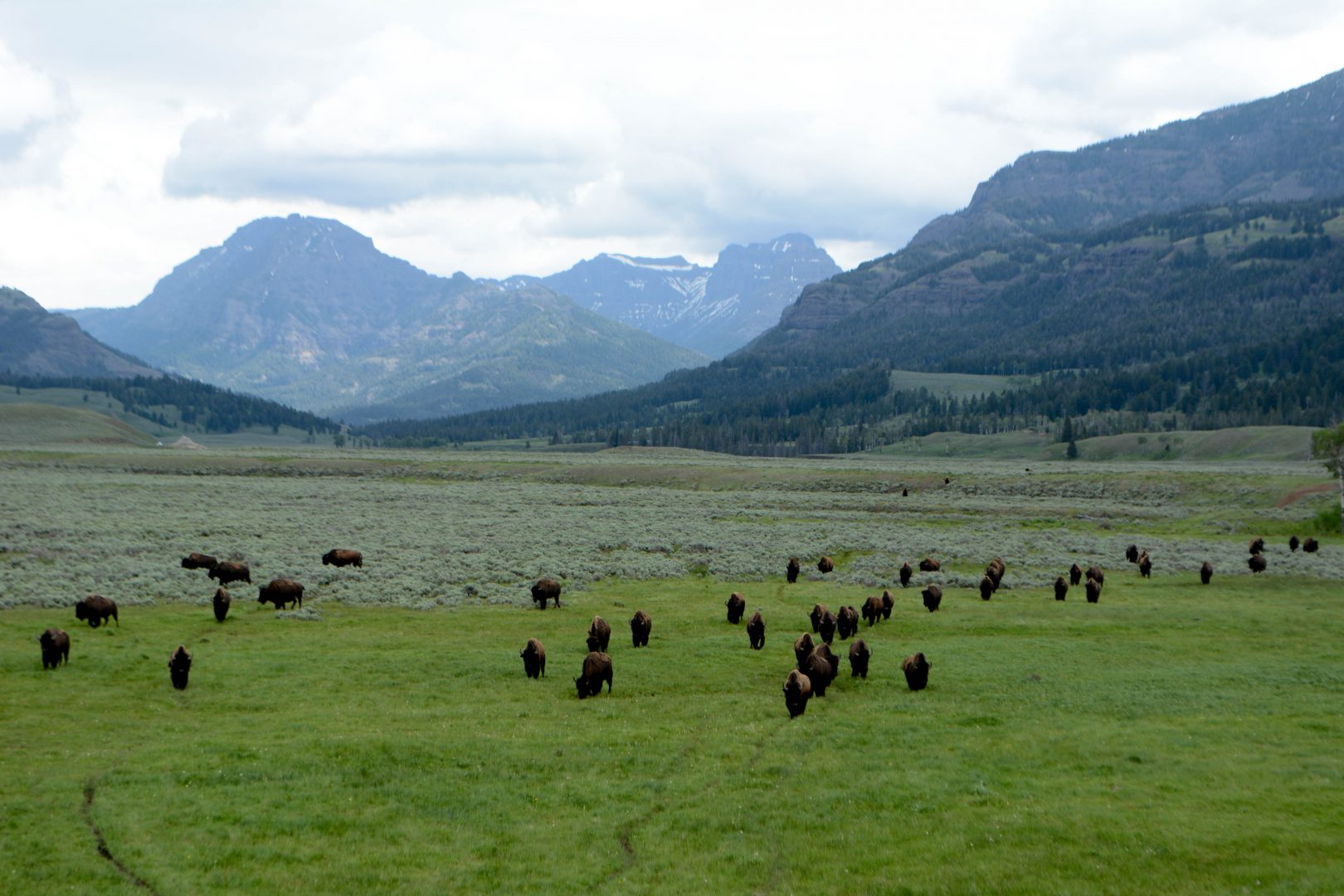 A wild herd needs to be sufficiently large enough to avoid genetic inbreeding and significant genetic drift. Keep in mind that bison are tournament breeders, which means that a single bull can breed many females. The dominance of a few bulls can produce many half-siblings that may foster inbreeding in subsequent years. 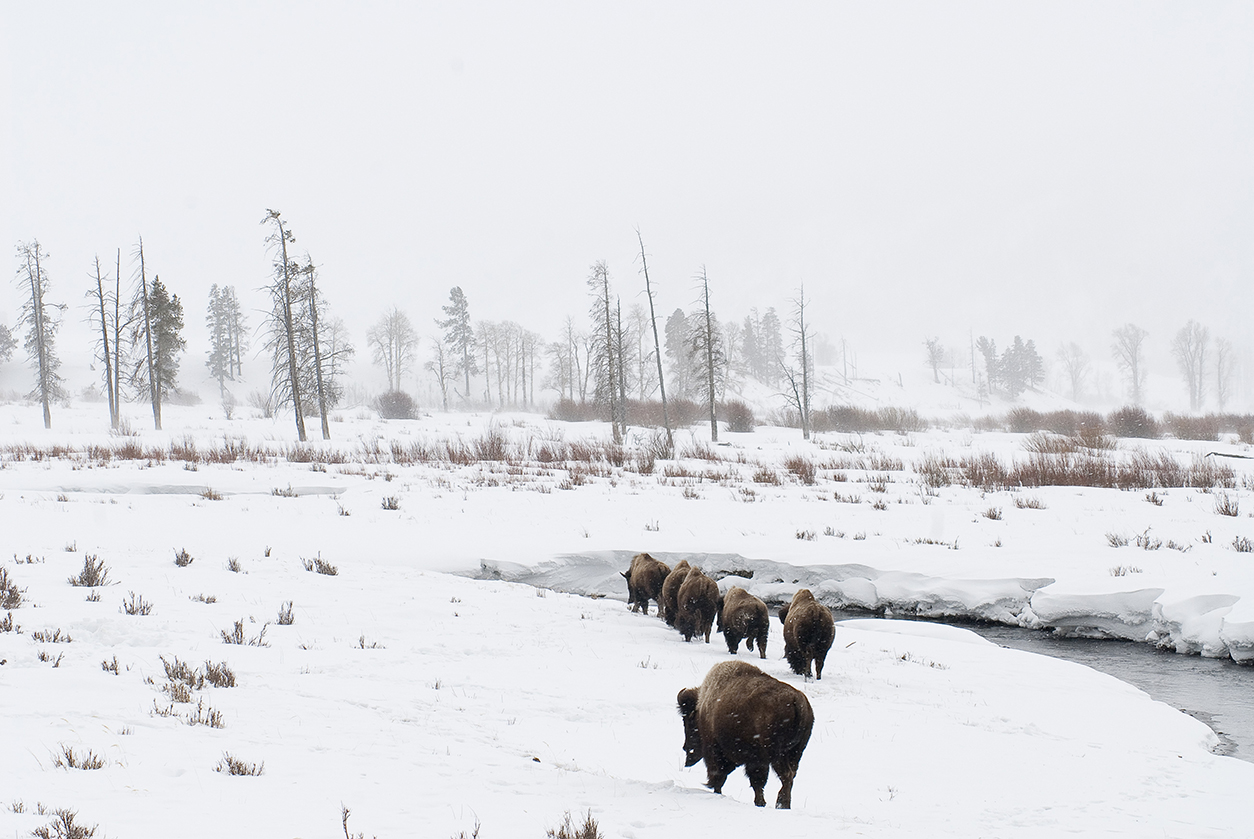 Bison in snowstorm. Evolutionary influences like harsh winters, drought, predators, and disease are all important to the maintenance of wildness. (Photo (c) George Wuerthner)

A large herd also experiences more evolutionary influences and thus can preserve rare alleles that might only have value under stressful conditions (like climate change).

Bison are the official mammal of the United States. It is time we started treating them with more respect and consideration.

We need to establish new wild herds of bison. Several prime locations could sustain large wild herds to ensure the ongoing preservation of “wild genes” in these animals. In 1910, William Hornaday of the Smithsonian Institution proposed a preserve for wild bison on the south side of the Missouri River in Montana and we still have an opportunity in this area to restore wild bison.

The million-acre refuge Charles M. Russell National Wildlife Refuge, along with adjacent Bureau of Land Management lands in the Missouri Breaks National Monument, and private lands in the American Prairie Reserve could easily support a herd of several thousand bison.

There is widespread public support for establishing a wild bison herd on the CMR under the U.S. Fish and Wildlife Service management. For example, a 2015 Draft Environmental Impact Statement for bison conservation and management that proposed establishing public bison herds in Montana by the Montana Fish, Wildlife & Parks received over 21,000 public comments. Likewise, the U. S. Fish and Wildlife Service received over 23,000 public comments during scoping and over 21,000 Public comments on the draft conservation plan for the CMR Refuge.

Three polls of citizens have shown that about 70 percent of Montana voters support the restoration of public trust, wild bison on the CMR Refuge.

Opposition to the establishment of wild bison herds in Montana comes primarily from Agricultural interests who currently control the political reins of the Montana legislature.

The Montana Wild Bison Restoration Coalition has put together a proposal to establish wild bison at the CMR.

The second potential restoration area is the Green River/South Pass/Red Desert area of Wyoming. The Red Desert is the largest unfenced area in the West and once supported bison herds in the 1800s. Most of this area is BLM land, though there are sections of state lands and other agency lands that might be incorporated in a wild bison refuge.

Though human hunting was a major selective factor in the evolution of modern bison before their near extinction, due to the small size of most existing herds, even a limited amount of human predation (as now occurred at the border of Yellowstone by tribal hunters) can negate natural processes like disease, social behavior, reproductive success, and energy efficiency, among other evolutionary factors. 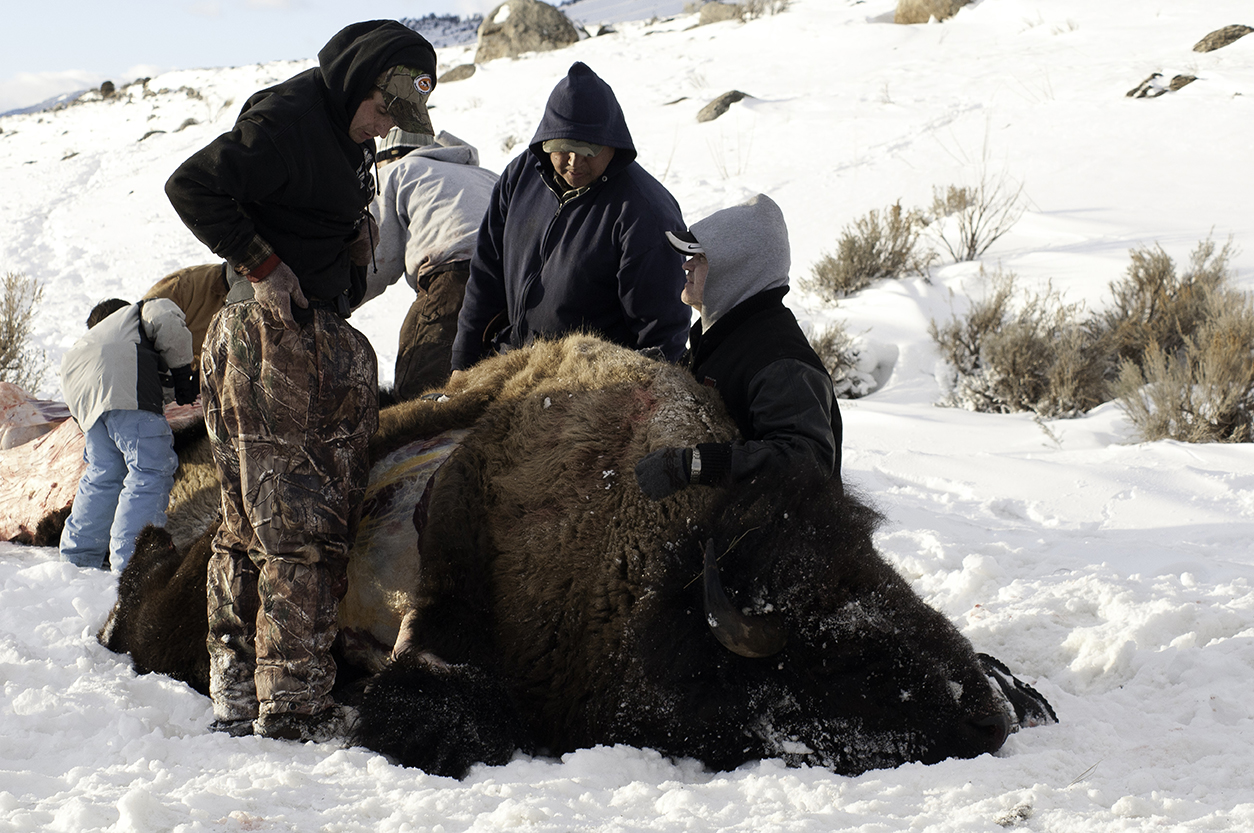 We will have to control the sizes of all bison herds and human hunting is one appropriate method. The issue is to remove animals in ways that minimize weakening and replacement of natural selection by controlling the ages of removed animals and the seasons of removal. The smaller the herd, the fewer animals (alleles) that are available to natural selection. 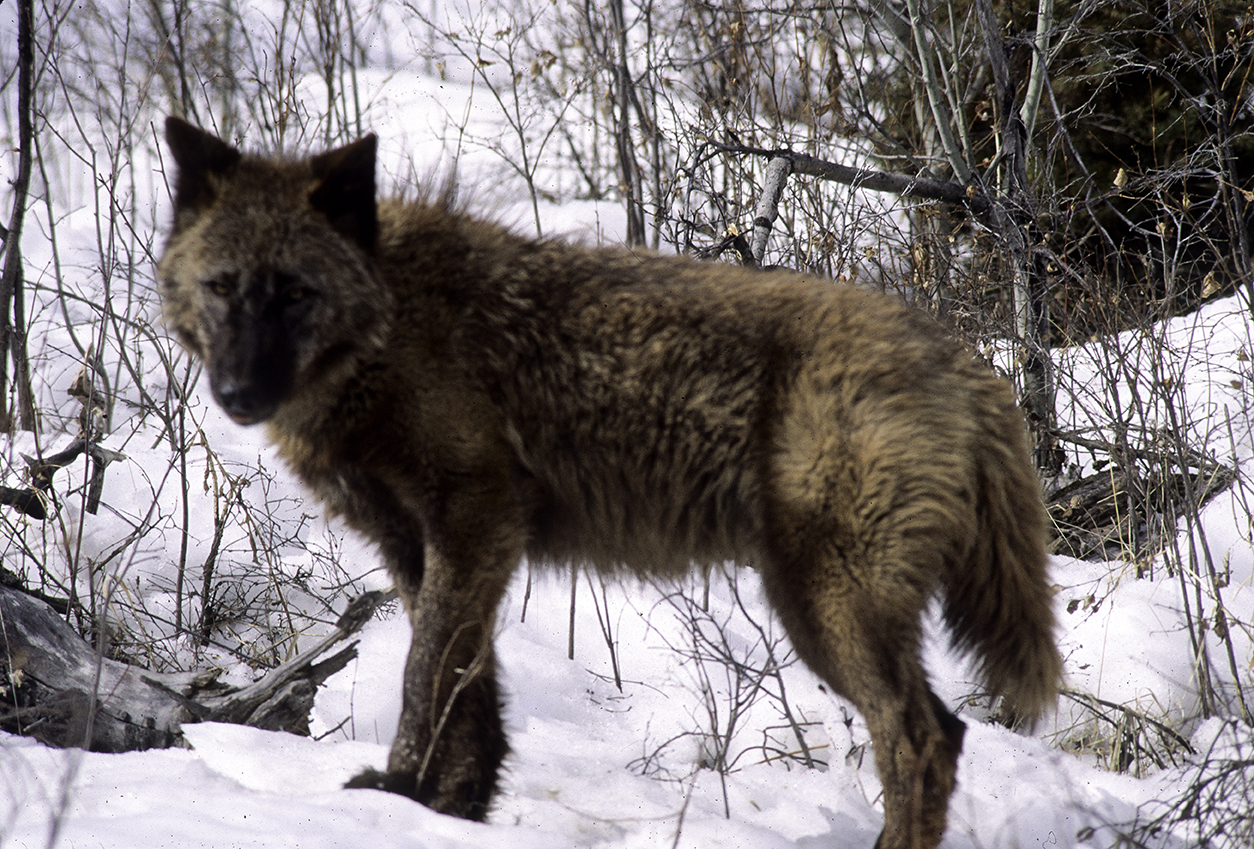 Wolf predation tends to select for the young and old. Any culling by humans should emulate this process. (Photo (c) George Wuerthner)

To degree that hunting is employed for culling herds, it should mimic the natural selection by predators like wolves who target yearlings and at the older animals, while prime-age 5–10-year-old individuals should be off-limits to removal.

It’s time to restore wild bison to the American West. We have the land base to do this, but do we have the political will?

A version of this essay originally appeared first on The Wildlife News. Republished here by the author.

Can you provide any source for the claim that indigenous hunting today is negatively affecting Bison, or is that just supposition? Also, I read the source you provided on cattle as substitutes and found it grossly generalized to the point of some irrelevance–my Longhorns routinely graze in my restored Prairie Dog town, those of us with Longhorns rarely if ever lose calves to predators (we do see the occasional a gored dead Coyote), and our ranches support essentially the full complement of current TX Hill Country vertebrate diversity. I also believe that your piece fails to do justice to the efforts of those like Wild Idea Buffalo who are striving to place Bison ranching in an authentic ecological and cultural context. Mind you, I’m all for enlarging the truly wild in your sense Bison herds, connecting them and so forth–but why the need to rhetorically downgrade additional and alternative land uses, especially when in the long run they might well dove-tail with your preservationist approach, in common support of conserving maximum biodiversity?