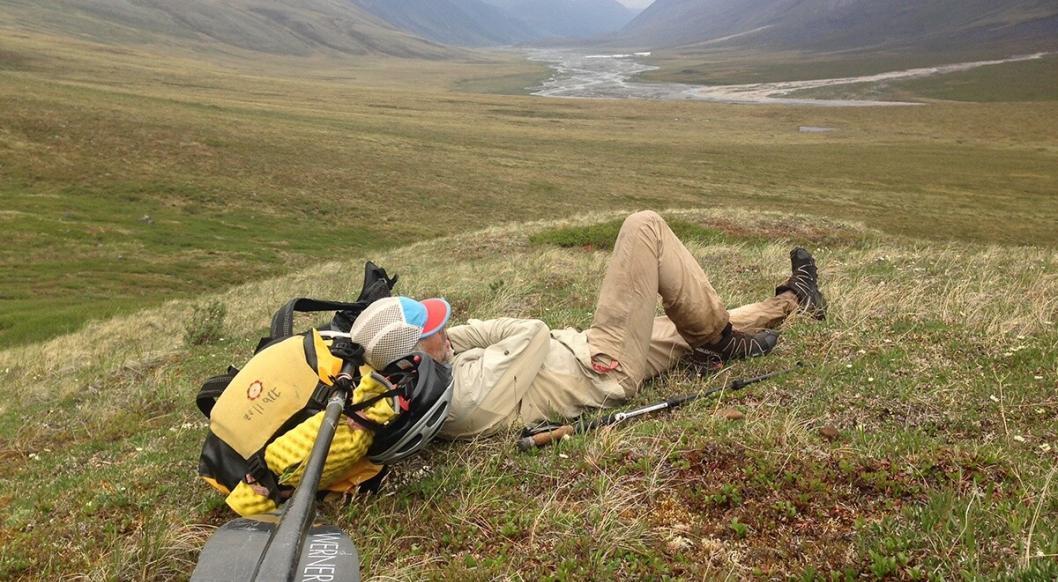 As we turned up the valley leading to the pass, the low level of anxiety that had been in the background for three days moved to the front of my mind.  On the map the pass appeared difficult, perhaps impassable without ropes, which we were not carrying. If we couldn’t get over the pass, we would face a long retreat and an overhaul of the trip. But there in the tundra appeared a clear sign that all the worry was wasted: a tread worn by caribou moving upvalley towards the pass.

If caribou aim for a pass, they are following ancestors who have gone that way for thousands of years. Signs of caribou heading towards a pass always tell me that I, too, will get over it.

Alaska is a paradise of apparently trail-less wilderness. Outside of a few parks and major population centers, trails built by and for people are scarce. Vast areas of open tundra provide unlimited wanderings, if only you can get there.  Thick brush and dense forest, widespread and becoming more common in our warming climate, usually lie somewhere between you and where you are going.

Getting through brush is often the major challenge of wilderness travel in Alaska. Bushwhacking is an art form that is improved by learning from the locals. Finding and using what my friend Roman Dial calls “BMW trails” (Bear, Moose, Wolf) can make all the difference between being stuck in the brush and cruising through it. Even a faint trail—a slightly compacted surface, a barely perceptible parting of the alders—is onward leading in a way that unbroken brush is not. Some people call them game trails, but getting shot isn’t my idea of a game so I prefer to call them wild trails. 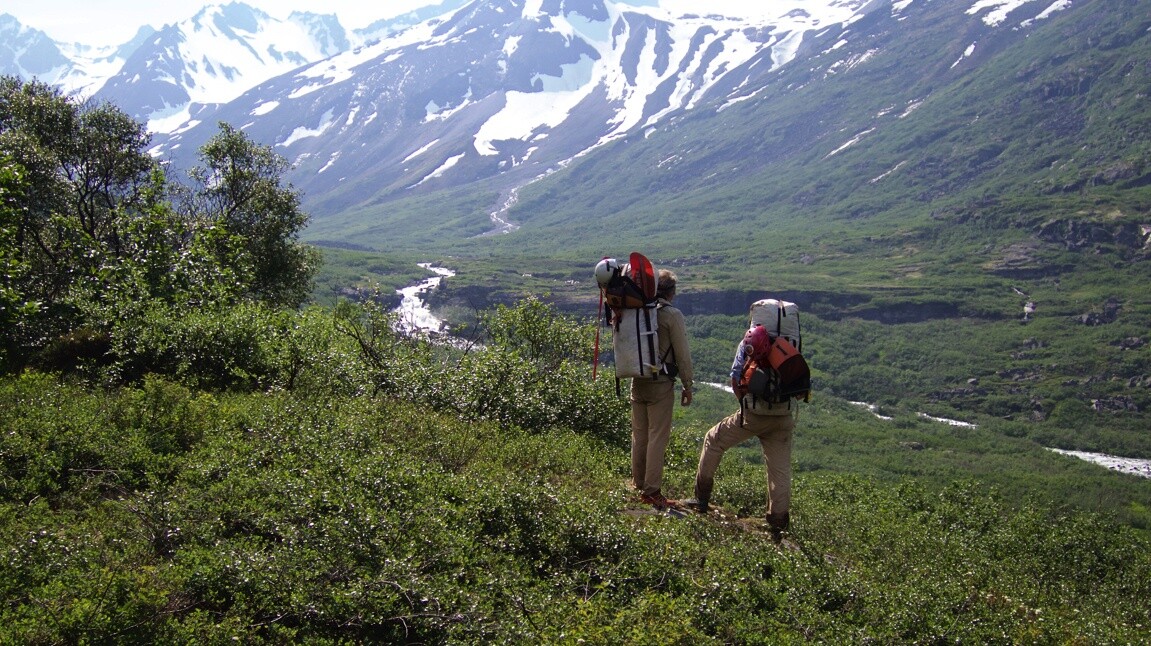 Each of the locals has their own style of trail making and trail use: caribou travel, moose wander, bears walk in their own footsteps, and wolves pace out of sight. Caribou make amazing single-tracks that run for hundreds of miles, but they don’t like to bushwhack: their ornate antlers and slight neck structure keep them out of heavy brush.  Moose can bull their way through the densest alder patch, but their trails quickly peter out in the next batch of tasty willows. Bears treads worn deep into the duff are exhilarating to follow, but bears will tunnel through dense brush and under downed logs, making it especially hard on tall people. Wolves prefer light cover so they can see without being seen and their scat cairns are helpful markers on established routes.

Caribou are covering ground as they move from their sheltered forest wintering grounds in the south to their open tundra breeding areas in the north.  They generally want to reach their breeding grounds via an efficient route before the bugs that plague them get too severe. Caribou aren’t daunted by big climbs over high passes and their splay-legged style carries them effortlessly through stumble-fuck tussocks and leg-breaking boulders. Their routes typically converge on the major mountain passes that have been used by generations of their ancestors. Getting on a caribou highway, hardened and widened by centuries of use, is a gift that can double your speed of travel. Caribou trails across open tundra are sometimes well-worn and long running, but inevitably you lose them where they cross a patch of stony ground or fan out in a sea of wet tussocks. 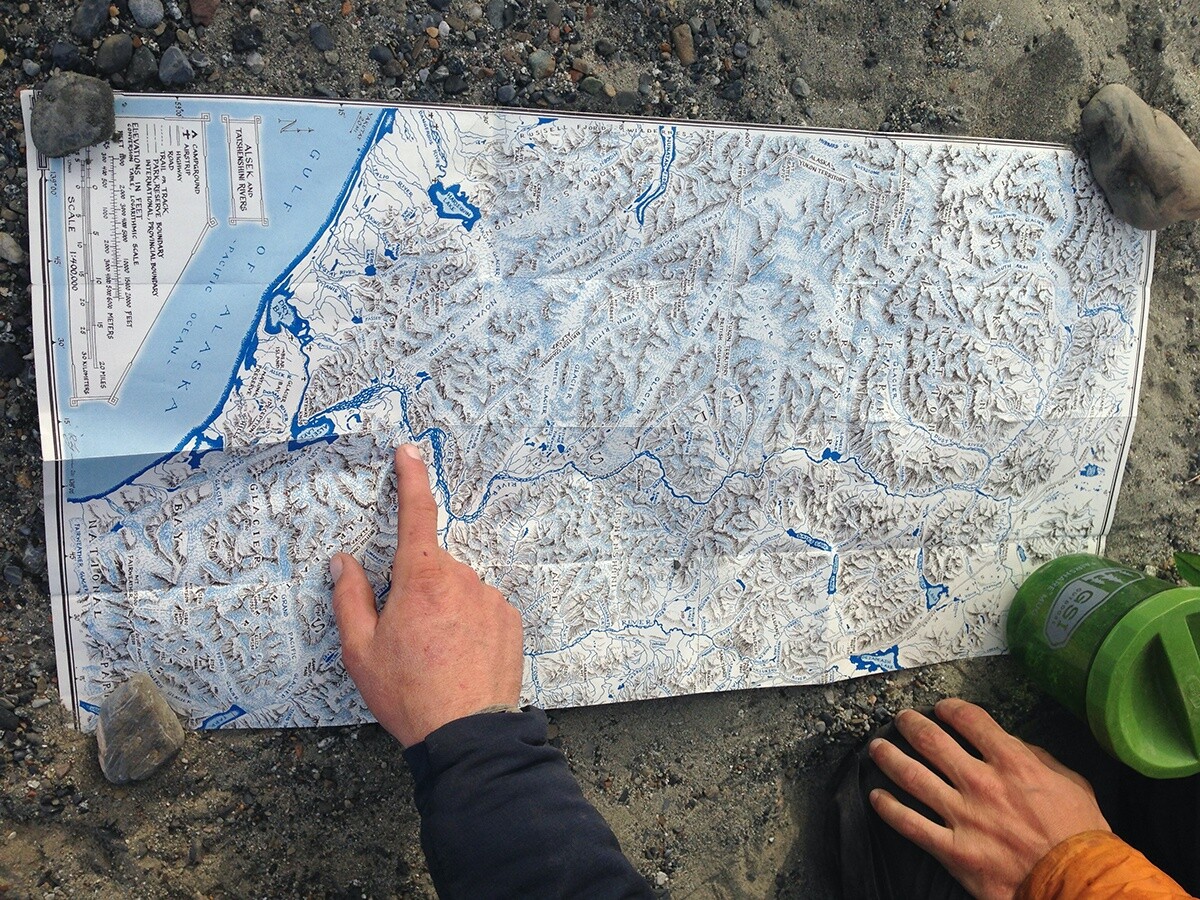 Moose are another matter. Moose may migrate between winter and summer hang-outs, but their movements are less directed, less goal oriented. They seem to fixate on their favorite willow patches, which is good news if all you need is to get through a stretch of bad brush. Most brush is patchy rather than a solid unending wall, and moose will make and re-use the same route through the patches to get to the next clearing.  The trick is to detect the opening they forge to break into the alders or willows, which may not be obvious. Once inside, follow the tunnel of least resistance, often lined with broken branches, scuffed ground, exposed roots, clumps of hair and moose droppings.

Moose trails don’t last long. You might get on a really good one only to lose it shortly thereafter. That’s just the way it is.  If it’s moose trails you’re working with, you have to find and refind them constantly. If the one you are on isn’t going where you want, drop it and find another one. Moose trails tend to exist in a web, so follow the strands as long as they serve your aim.

Bears are good travelers and fine trail builders fitting somewhere in between caribou and moose. Like caribou, bears are faithful to traditional routes and will wear the treadway into deep depressions in the ground.  Legend on Kodiak Island is that the bears have worn trails into the granite bedrock.  Following these bear treads can be a bit spooky, as the platter-sized craters tell a story of giants passing. Bears, especially grizzlies, seem to smear their feet to increase the size of these treads, perhaps to spread scent from their pads, perhaps to increase the sense of awe in those who follow.

Unlike caribou and more like moose, bears, especially big males, have a home turf with definite routes that they patrol.  Bear trails are often marked by spruce trees that have been bitten, broken, or rubbed to form scratching posts. Clumps of bear hair clog the broken branches and cling to weeps of spruce sap.  Deep treads form in either direction along the trail from the scratching posts as the bears “cowboy up” to these landmarks. If it’s bear trails you’re after, you might strike a good one that you can hang on for miles, only to lose it when you move out of that bear’s territory.  You may go trail-less until you get into the next guy’s turf. 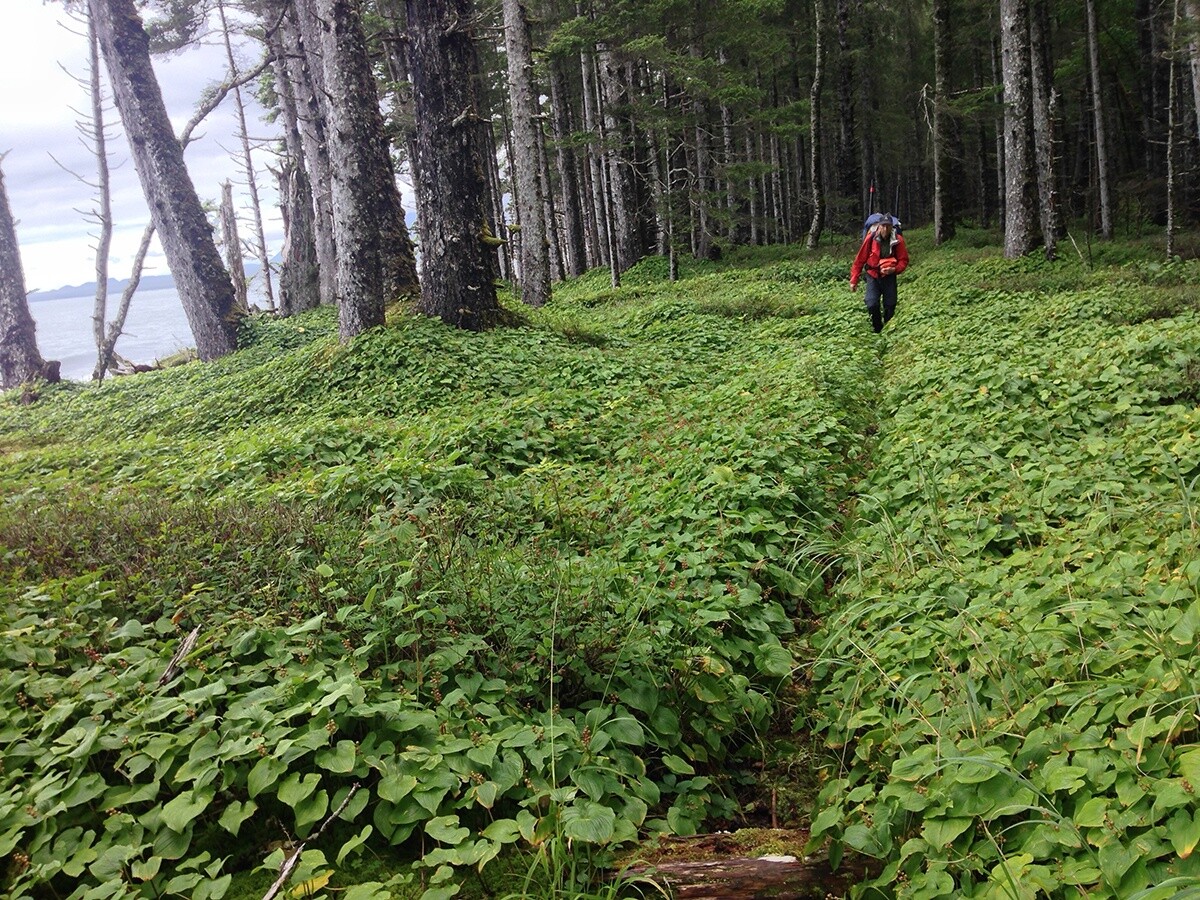 Wild trails are sporadic. They come and go, they fade in and fade out. Finding them is one thing and staying on them is another. You need an intuitive sense of where animals are moving from and going to in order to pick up wild trails and stick with them. Rather than moving slowly and carefully to avoid losing a wild trail, just keep going until your line of travel rejoins the trail. Terrain sometimes forces the creation of a major wild trail as everybody is funneled through the same spot. In these places I’ve picked up wild highways that last until the obstacle is passed then fade out entirely.

Rivers and ridges are two reliable places to locate wild trails. You can almost always find wild trails adjacent to rivers and streams, where otters, beavers, muskrat, and mink join the parade. Somewhere within thirty feet of the riverbank is where you’ll locate these riparian highways. A raised riverbank with open timber is an ideal place to find trails of predators like wolf, bear, lynx, and wolverine. Here the travel is good with views of prey and plenty of cover. If you need to cross a deep river, wild trails will usually lead you to the shallowest, broadest fording spot.

Everybody seems to like a view, so ridges are especially good places to find wild trails. Wooded spine ridges are reliable routes out of brushy valleys and you’ll often strike wild trails converging on cols, saddles, and low points of higher ridges. Dall sheep are alpine specialists whose ridge trails are a delight. Sometimes sheep descend deep valleys for water or to cross to alternate grazing meadows. Finding an established sheep trail can be a leg-saver for traversing steep talus or navigating serrated ridge crests, though sheep have a tolerance for exposure that might exceed yours.

Nobody likes wet feet all the time.  Even moose will seek drier ground for bedding, and everybody else chooses it for travel. Look for drier ground and you’ll often find it, and wild trails, at the toe of a slope, at a slope rollover, or along wooded ridge spines. In Alaska, south-facing slopes tend to be drier and preferred for travel over “sponga” (Alaskan for spongy tundra) north faces. Flat areas are universally the best places to find soggy tussock tundra that will demoralize you and deter all except caribou. 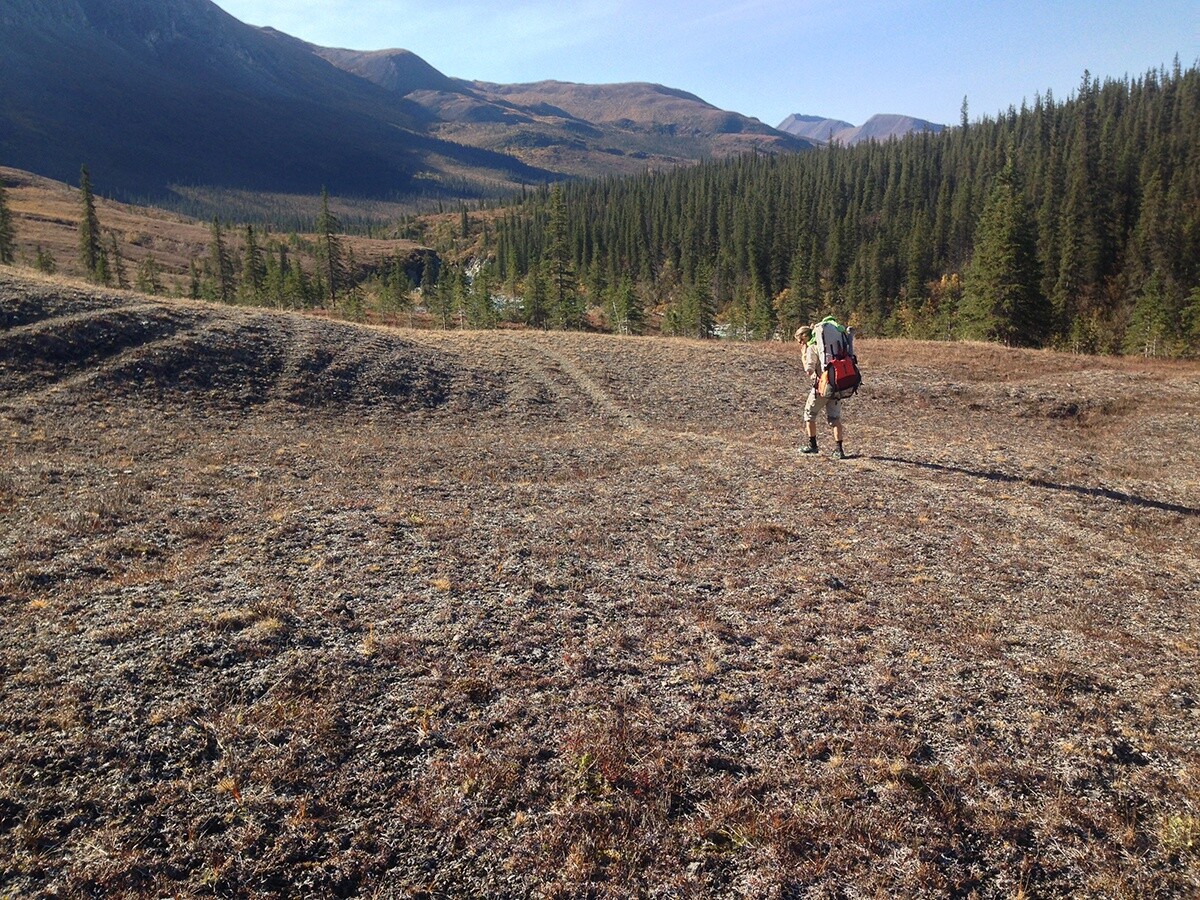 If you regularly use wild trails you are bound to meet their makers.  Every Alaskan has their personal bear strategy, but to avoid surprise encounters I prefer breaking large sticks as I go.  Researchers have established that the sound of breaking sticks gets the attention of bears more reliably than bells or human voices.  Roman espouses the opposite strategy, preferring to travel quietly to avoid attracting the attention of bears.

Wild trails are a clear sign of the health of a place. They signal that the natural community is functioning as it should. Creatures big and small are moving across the landscape as they have for thousands of years, making and following wild trails. But in many parts of the world wild trails have faded out entirely as the trailmakers have been decimated or eliminated. Consider that one of the greatest trailblazers, caribou, roamed New England up until 1910. Now, they are gone and their trails have faded out.

We are witnessing that happen now in Alaska, one of the last strongholds for wild trails. Because of a warming climate, heavy brush is invading tundra regions.  On a recent trip through the Brooks Range, my friend Roman Dial and I followed ancient caribou trails to a wall of new willow growth. The trails could be seen leading up to the thicket, but since caribou don’t like to bushwhack, they had abandoned this route to seek another way south.  Increasingly there isn’t another brush-free way south, leading to severe disruptions in caribou migration that ripple through the entire ecosystem.

We are quickly losing some of the greatest hiking in the world to a warming climate. The vast open expanses of Brook Range tundra are rapidly closing in with willows, alders, and expanding forest. We can only hope that the builders of wild trails can keep up and help us find our way through the thicket.

Fun article Brad, thanks for it.