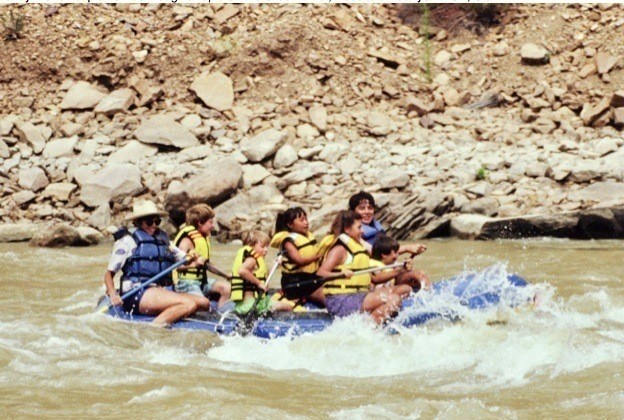 #62 Around the Campfire; Wilderness for the Drylands Bureau of Land Management Wilderness

(Note: This edition of Around the Campfire is adapted from my new book, The Great Conservation Divide, which is now in print. An announcement and order form will soon go out to this list.)

Bureau of Land Management in the Wilderness Act

Howard Zahniser and other wilderfolks wanted to have all four federal land managing agencies in the Wilderness Act, but one did not make it. This was the Bureau of Land Management. Although it oversaw more land than the other three agencies, it had drawbacks insofar as Wilderness went. For one, BLM had never administratively set up primitive areas of any kind. Doug Scott writes

BLM…had not administratively designated any areas equivalent to the national forest primitive areas. That made it prohibitively difficult to require a formal wilderness review for BLM-administered lands. There would have been no way to circumscribe the extent of initial wilderness reviews…. Suggesting an inventory of all BLM roadless lands in that era would have been politically unacceptable.

Moreover, it was still a bit up in the air whether the public lands BLM cared for should and would be kept as public lands. That was not settled until 1970; BLM had no “organic act” until the Federal Lands Policy and Management Act (FLPMA) in 1976.

The second drawback was that pretty much the only folks who knew about BLM and its lands were those who had long ruled them for the good of their pocketbooks. We can put them into four cubbyholes. 1. Grazing permittees, some of whom overlorded the public land in “their” ranches and did not let the public in, even though that public had every right to go in. 2. The mining industry, which believed that the 1872 Mining Act gave them the freedom to do whatever they wanted on public land and not worry about any land they scalped or banes they left. 3. Energy corporations (oil, gas, and coal), which shared the miners’ beliefs, but who were under the Mineral Leasing Act instead of the rootin’, tootin’ 1872 Mining Law. 4. Utilities, which saw BLM land as a blank canvas on which they could draw lines for power and telephones, and for pipes carrying oil, gas, and water.

These four might bicker among themselves a little, but they did not fuss that the BLM worked for them. The poor sister to these mighty four were hunters since BLM land was wide-open for lawful hunting and, notwithstanding widespread overgrazing, often had good hunting for birds and pronghorn. Others, such as poachers, trappers, pothunters and other archaeological site looters, and jeepers, who liked to wander about the outback, also prowled BLM land as country where there were no laws. Many times, such desert rats did not even know something like the Bureau of Land Management existed.

The third drawback was that darn few wilderfolks knew that there was any good wilderness in the wide sweep of lands BLM oversaw throughout the Western states and Alaska. Drylands, unless they had amazing rocks, were as yet not loved, but by a few oddballs, such as Edward Abbey, who had not yet written Desert Solitaire. Even the small bunch of good BLM staffers didn’t think there was much wilderness on their lands. Chuck Stoddard, a top resource economist and director of BLM under Interior Secretary Stewart Udall, was one such BLMer. In the late 1970s, he was on The Wilderness Society’s Governing Council and warned Debbie Sease, who was overseeing the startup of the BLM wilderness review for The Wilderness Society, that he did not think there was much land at all under the BLM that had Wilderness worth. Debbie sat him down for a slideshow of wild BLM lands that her grassroots helpers were finding. Chuck was blown away by the slides he saw. He couldn’t believe they were from the lands he had once had under his wings.

What this all means is that The Wilderness Society, Sierra Club, and friends wanted BLM put in the Wilderness Act, but they had neither the knowledge nor the fired-up grassroots in 1964 and before to make much of a fight about it.

So. Public lands under the Bureau of Land Management were dropped from the Wilderness Act and from being in the National Wilderness Preservation System. One stalwart soul fought to have BLM in the Wilderness Act from early on and afterwards was untiring in singing the wonders of BLM wilderness and other outstanding areas: the amazing Charlie Watson of Nevada.

That BLM was left out of the Wilderness Act was only put right in 1976 when Congress pulled together an organic act for the BLM called the Federal Land Policy and Management Act (FLPMA). The Wilderness Society worked hard throughout the cobbling together of FLPMA to get a Wilderness Area review and recommendation process. John Melcher of Montana was chair of the House Subcommittee on Public Lands and took the lead on FLPMA. Melcher was not always a friend to conservationists, but he did us right insofar as a Wilderness review and recommendation process went into FLPMA. He should therefore be acknowledged as one of a few who helped to shape the National Wilderness Preservation System into a truly nationwide and ecologically representative system. Harry Crandell of TWS wrote the Wilderness section (called “602” for its section number in FLPMA). He also rode herd on The Wilderness Society’s field representatives so that we would put BLM Wilderness high in our to-do stacks.

I don’t recall the BLM brass naysaying a Wilderness review. Likely they saw it as a way to jack up their status and visibility (and budget) and to show off a few wonders as good as anything the other agencies had. I do recall one meeting in Washington with top BLM staff to talk about the Wilderness review, though. I was likely a bit over-the-top in what I saw as the potential for BLM Wilderness until Roman Koenings, an old-time BLM bureaucrat and associate director, exploded, “How many millions of acres of sagebrush flats do you want in the Wilderness System?!” I calmly said back to him, “Why, as many as qualify, sir,” and left him utterly befuddled. I don’t think he had ever talked to anyone who thought mile after mile of flat sagebrush country was good for anything but grazing. (The biggest standalone BLM Wilderness Area today is Nevada’s Black Rock Desert of over 300,000 acres–totally flat with lots of sagebrush.)

Melcher held field hearings around the West. I had the job of turning out lots of BLM wilderness backers to the Albuquerque hearing. Other Wilderness Society field reps and I did good work. Throughout the western states we showed Melcher and other subcommittee members that many folks were behind BLM wilderness. We field reps had another job, too, and that was to show the subcommittee members that BLM lands held likely Wilderness Areas of the “quality” of what the National Forests and National Parks had. Some worried that this would not be easy, and Melcher was straightforward in telling conservationists we had to “wow” congressmembers with eye-popping, breath-taking scenic beauty. We had little time to come up with such lands before the hearings.

Karen Tanner and Ron Kezar on a field trip to Desatoya Mountains, Nevada

I recall that work with a happiness that nothing else has ever matched. It was the unknown we had to explore. For many years the National Forests had been ridden, hiked, mapped, looked at; the great spots named. We had nearly none of that background for BLM. Only a few standouts, such as southern Utah’s Escalante River and some mountains in the California Desert, were known. Otherwise, it was the great unknown. And it was holy bliss to come to know it. In New Mexico, with Debbie Sease (my wife at the time) and Sierra Club leader Wes Leonard from El Paso, I came up with a good list of de facto BLM wilderness. Climbers in the New Mexico Wilderness Study Committee already knew a few peaks, such as Ladron Mountain south of Albuquerque. The main wit for likely BLM wilderness, though, was a somewhat shadowy retired CIA operative, Col. Henry Zeller, who looked like someone from the best days of Her Majesty’s British Empire. He would have looked good in a pith helmet and with a pipe. Zeller then lived in Silver City and was in the local Audubon Society in that heaven for birders. He drew up a list for us that to this day has the “best” of the BLM areas in New Mexico. How he came up with his list of the best, I had no clue.

Work in other Western states followed a like path, with more and more wilderfolk falling in love with the out-of-the-way, overlooked wilderness of the drylands.