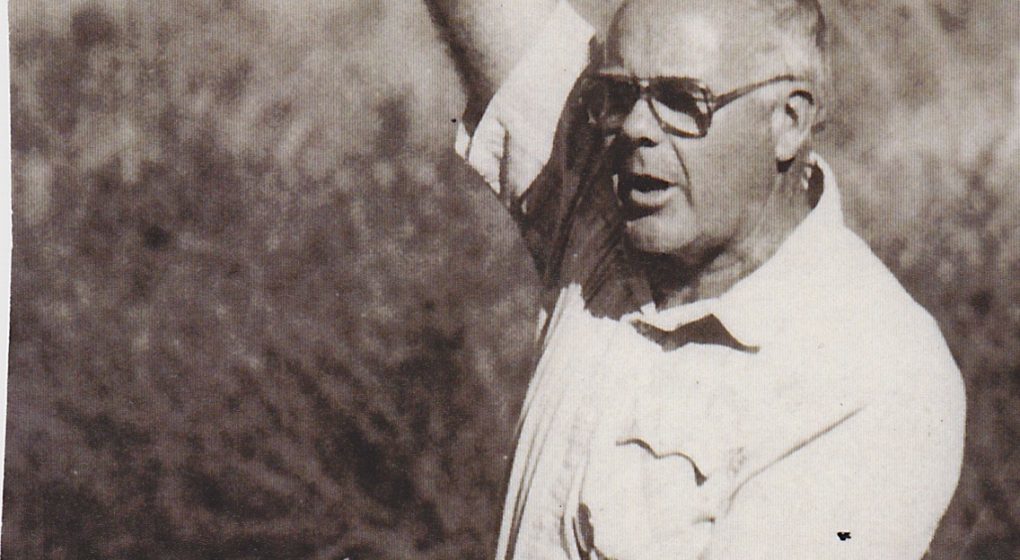 Steward Brandborg was a wilderness champion, a leader of The Wilderness Society during its period of greatest contribution to wilderness preservation. “Brandy” was not only an executive and passionate wilderness advocate, he was an educator who contributed to the wilderness movement by prioritizing training and education of wilderness activists across America. Historian James Morton Turner, in his landmark history of wilderness preservation The Promise of Wilderness, observes that Brandy “chose not to invest the organization’s limited resources in economic, scientific, or legal expertise or focus its efforts in Washington, D.C. – strategies that became increasingly important for much for the environmental movement in the 1970s. Instead, he poured the Wilderness Society’s resources into supporting existing networks of grassroots activists nationwide and helping build such networks where they did not exist.” What resulted was a national cadre of wilderness advocates, and expansion of the National Wilderness Preservation System beyond the fondest hopes of its earliest advocates. Turner tells the full story of Brandy’s contributions, and a great story it is. Kevin Prescholdt eulogizes this great wilderness champion in the following piece.  John Miles 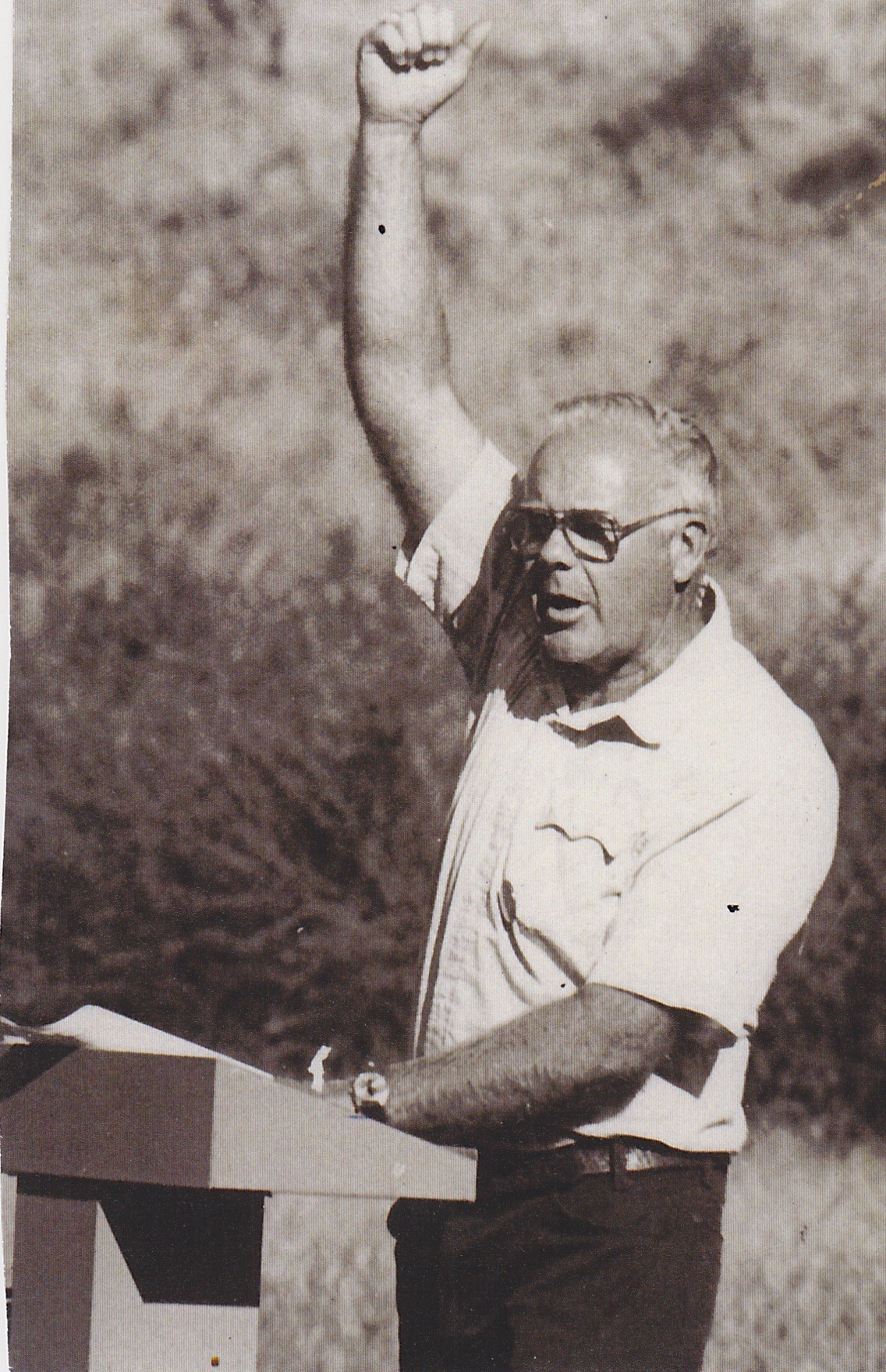 On April 14th, wilderness legend Stewart M. “Brandy” Brandborg broke camp one last time from his home in Hamilton, Montana, and headed over the Divide. He was 93.

Brandy was a giant in the wilderness movement, and the last surviving architect of the 1964 Wilderness Act. A wildlife biologist by training, Brandy conducted groundbreaking field studies of mountain goats in Idaho and Montana in the late 1940s and early 1950s. That work led to a job with the National Wildlife Federation in the Washington, DC, area in 1954. He quickly came to the attention of Howard Zahniser, the executive director of the Wilderness Society. Zahniser recruited Brandy to join the Wilderness Society’s Governing Council in 1956, the same year that Zahniser drafted the first version of the Wilderness Act, so Brandy was in on the ground floor of the eight-year push to pass this landmark bill. In 1960, Zahniser hired Brandy to join the staff of the Wilderness Society, where he worked alongside Zahniser, David Brower of the Sierra Club, and others to pass the bill through Congress. 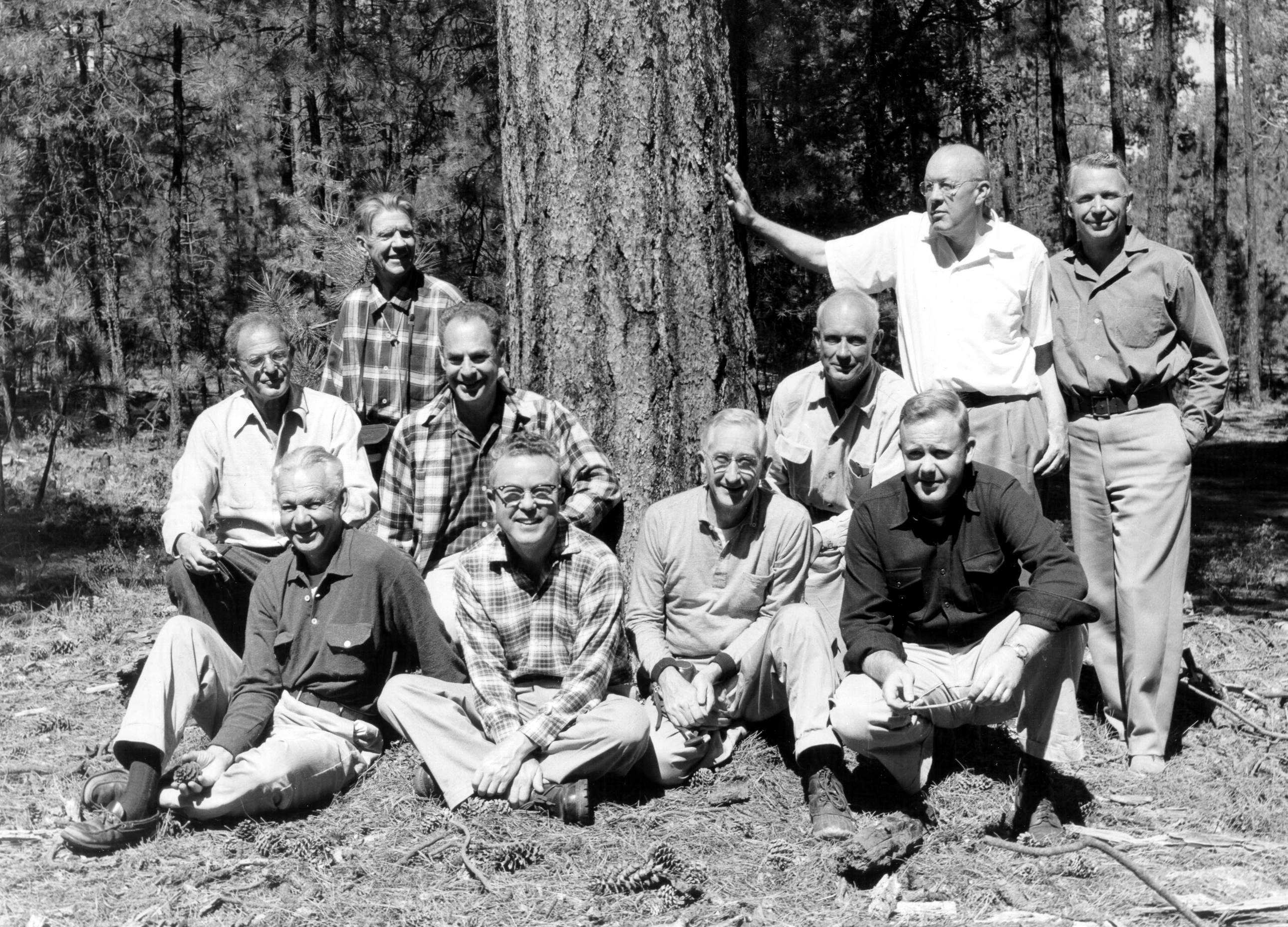 Not only were there external interests (like timber, mining, and ranching) to overcome, but internal challenges as well. Some members of the Wilderness Society Governing Council, like Jim Marshall (older brother of Bob Marshall) and Dick Leonard (head of the Sierra Club), constantly badgered and second-guessed Zahniser and Brandy on their strategies and efforts. Worried that the organization might lose its nonprofit tax-exempt status, they even suggested that the Wilderness Society abandon its effort to pass the Wilderness Act. As the organization’s executive director, Zahniser took the brunt of their criticisms and badgering.

One such point was reached in 1959. But it was the young eloquent firebrand on the Governing Council who rallied the group to stay the course and push ahead toward final passage. On October 27th, Brandy wrote an impassioned nine-page letter to the Governing Council. “Our organization has become a major force in the conservation movement,” Brandy wrote. “This is because we stand for something that people need. We have had the finest kind of progressive leadership through the years from Olaus and Zahnie. Now we face a real test and great opportunity to establish a law that will recognize and provide a satisfactory procedure for protecting wilderness. I hope we do not turn our backs on it because of a preoccupation with our organization’s status and financial security….If we fail to meet the wilderness challenge, will others also?” Brandy’s eloquent entreaty fortunately carried the day.

After Zahniser’s untimely death in May of 1964, Brandy was selected to succeed Zahniser as the executive director of the Wilderness Society. Brandy helped push the Wilderness Act across the finish line when President Lyndon Johnson signed the bill into law on the 3rd of September. 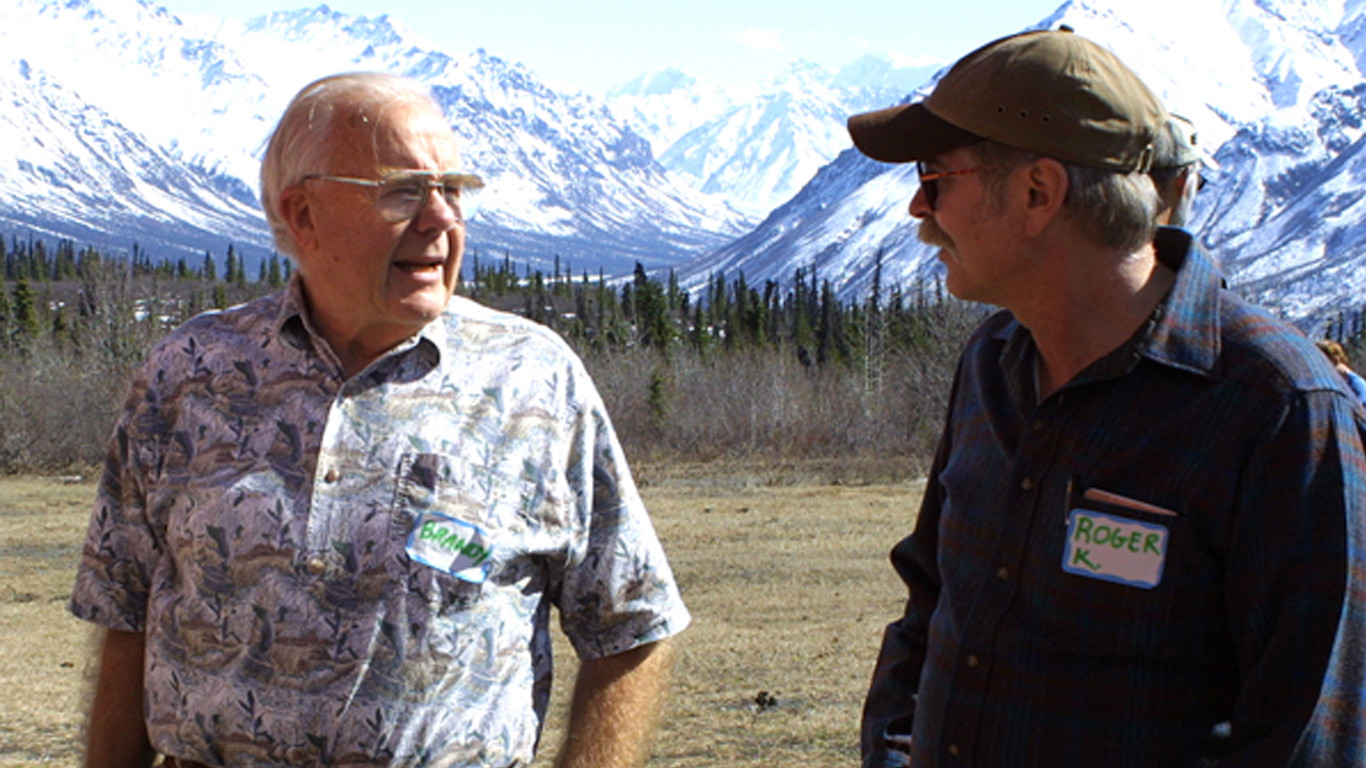 One of the defeats within the Wilderness Act was a requirement that Congress must pass a new law to add each new area to the National Wilderness Preservation System. This provision was insisted upon by the powerful House committee chair, Rep. Wayne Aspinall, no doubt to limit the number of new Wildernesses added to the system. Little could Aspinall have anticipated what he had unleashed.

After he was ousted by the Wilderness Society’s Governing Council in 1976, Brandy worked with the National Park Service during the Carter Administration where he continued to organize training for activists. Brandy always believed that organizing people provided benefits not only for wilderness conservation, but also for society as a whole. “Building the circles” of people enriched the social fabric of the nation, Brandy believed, in addition to finding and organizing activists for wilderness conservation or local planning. 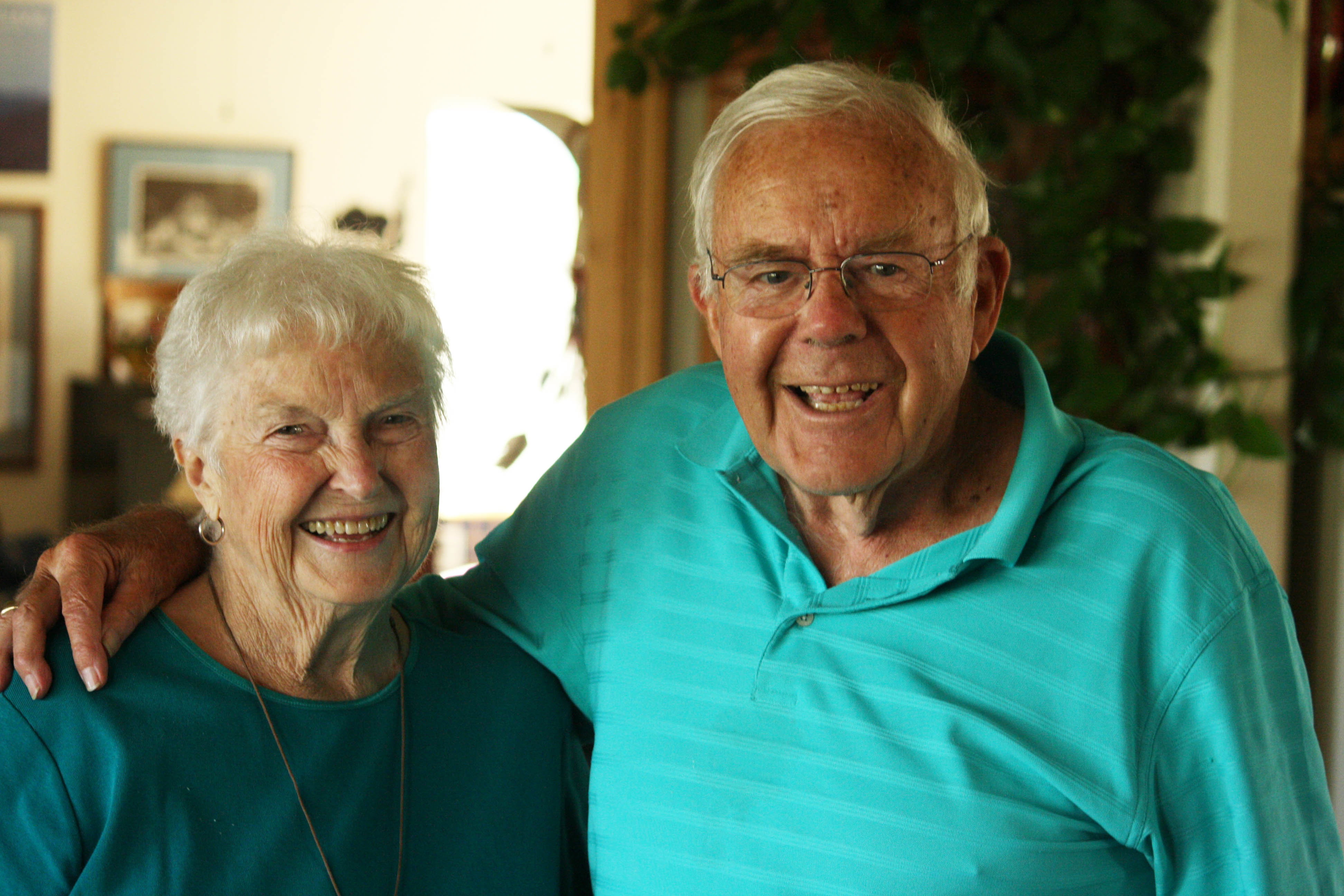 Brandy and his wife Anna Vee returned to the Bitterroot Valley in Montana in 1986. He never really retired, but continued his wilderness activism for another three decades. He joined the board of directors of Wilderness Watch in 1998, where he served with other such wilderness luminaries as Stewart Udall, Orville Freeman, Joe Fontaine, Michael Frome, and Bill Worf. Brandy served on the board, and later as Wilderness Watch’s Senior Advisor, for a 20-year run from 1998 until his final journey in April. With each visit and phone call, Brandy would ask for the latest updates from the wilderness field, and then hand out our assignments to save all the remaining Wilderness with no compromise and no collaboration. Dedicated and feisty to the end, he gave a final speech to a full house of activists in Hamilton a few weeks before he died. 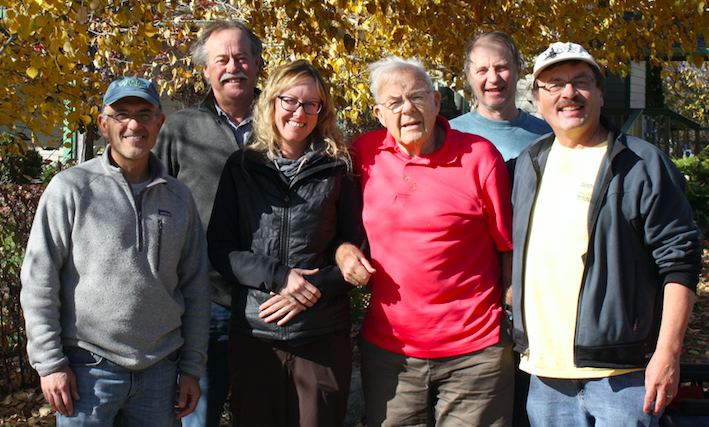 All of us at Wilderness Watch extend our condolences to the Brandborg family, and our thanks to them for sharing Brandy with us for so many years. Brandy will continue to inspire the wilderness movement and Wilderness Watch far into the future, and we fully expect to receive our next assignments from him in short order.

Kevin guided canoe trips in Minnesota’s million-acre Boundary Waters Canoe Area Wilderness (BWCAW) for ten years and has visited designated and undesignated Wildernesses throughout the U.S. and Canada. He helped pass the 1978 BWCA Wilderness Act through Congress, directed the Friends of the Boundary Waters Wilderness for sixteen years, and co-authored the 1995 book, Troubled Waters: The Fight for the Boundary Waters Canoe Area Wilderness. For the eight years prior to joining the Wilderness Watch staff, Kevin directed the National Izaak Walton League’s Wilderness and Public Lands Program. Kevin has been active with Wilderness Watch since 1989, joined the board of directors in 2003, and served two years as president of the board. He has written extensively on the Boundary Waters and wilderness policy and history. He remains involved with The Listening Point Foundation, which is dedicated to “preserving Listening Point and advancing Sigurd Olson’s legacy of wilderness education.”

Mapping the Border Wall in Arizona and New Mexico