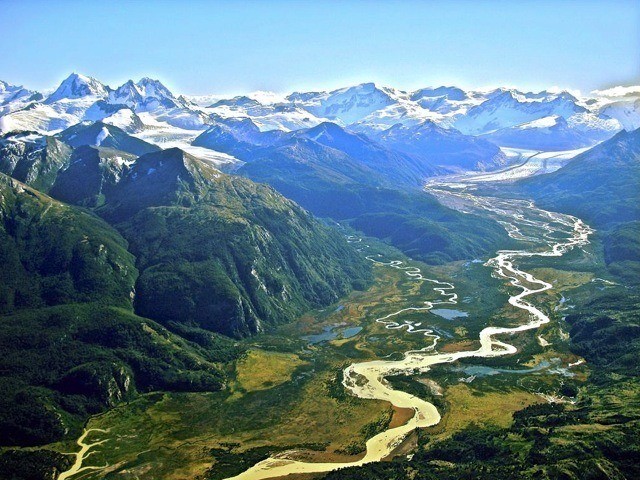 DECEMBER 12, 2013— In Tierra del Fuego—the southernmost extreme of the Americas—Chile will gain a spectacular new national park through landmark public-private collaboration between President Sebastian Piñera and Fundación Yendegaia, a branch of Douglas and Kristine Tompkins’ conservation projects. Fundación Yendegaia will donate the former Estancia Yendegaia (94,000 acres) toward the creation of the new national park, while the Chilean government will annex 276,000 acres of adjacent government land, to be upgraded to national park status.  The new park will be among Chile’s largest, only slightly smaller than the iconic and nearby Torres del Paine National Park.

Protecting 370,000 acres of mountains, glaciers, rare sub-Antarctic forest, lakes, and rivers, the park stretches from the Darwin Range to the Argentine border, and from the Beagle Channel to Fagnago Lake. Yendegaia creates a contiguous biological corridor between Chile’s Alberto D’Agostini National Park and Argentina’s Tierra del Fuego National Park. The new park protects the last frontier of pristine sub-Antarctic beech forest, one of Earth’s largest remnant of Gondwana, the last supercontinent from 180 million years ago. Long declared a “Priority Site for Conservation,”

The name “Yendegaia” means “Deep Bay” in the indigenous Yámana language, from the property’s protected bay on the Beagle Channel.  To allow visitors to access this wild and largely pristine wilderness, Chile will develop public access, including trails and refugios, from the access points via Route Y-85 to the north.  Yendegaia National Park can also be reached via boat from Puerto Williams, the southernmost city in the world.

The birth story of Yendegaia National Park begins in 1998, when the possibility of purchasing Estancia Yendegaia emerged.  A group of Chilean conservationists led by botanist Adriana Hoffman urged Doug and Kris Tompkins to visit the property, who immediately recognized its conservation importance. After several months of evaluation, The Conservation Land Trust, a foundation led by Doug Tompkins, along with fellow conservationists Peter Buckley and Ernst Beyeler, provided the funds to acquire Estancia Yendegaia.  The property was subsequently transferred to Fundación Yendegaia, a Chilean foundation.

In March 2011, Douglas and Kristine Tompkins approached Chilean president Sebastian Piñera with a proposal to collaborate in strengthening the National System of Protected Areas (SNASPE). The concept was to create several new national parks and expand others through donating private conservation land and upgrading certain National Reserves to National Park status. National Park status honors the national patrimony and represents the ultimate goal for conservation properties. National parks offer the most secure guarantee of institutionalized protection, the most historic method of building national pride in conservation, and the strongest strategy for developing ecotourism and conservation-related development that bolsters local economies.

During 2011 and 2012, an ad hoc committee, spearheaded by Piñera and including representatives from the ministries of Environmental, Natural Resources, Economics, Tourism and the Forest Services, analyzed the proposal. Early in 2013, the committee decided to prioritize the creation of Yendegaia National Park, due to its ecological attributes and excellent potential for ecotourism development. After extensive mapping and surveying work and consultations with nearby indigenous communities, the Chilean government, led by Minister of the Environment Maria Ignacia Benitez, signed the new park into law on November 29, 2013. On December 11, 2013, Piñera announced the news publicly.

Doug Tompkins reflected: “Yendegaia National Park is the result of a long-time team effort, and Kris and I are proud to have worked alongside a remarkable group of people, from visionary funders to dedicated Chilean conservationists. One of the original donors passed away some years ago, but I know he would be delighted today to hear the news. Our whole team feels proud of this accomplishment, as does the team of the Presidency. This is a historic moment—the creation of a new national park always is—and we hope that all Chileans share in this excitement. Lastly, we all must credit President Piñera for his commitment to this project, from the first discussions. As a first-rate conservationist in his own right, with his remarkable Tantauco Park, Piñera might be the greatest conservationist-president in the world today, and we are grateful for this opportunity to work together.”

Hernan Mladinic, director of Fundación Yendegaia, commented, “As a board member and a Magellan, I am doubly proud of this achievement: the first creation of a new National Park in the Magallanes Region in 40 years. When Yendegaia is up and running, it will offer a spectacular complement to Torres del Paine National Park. This new park will advance the region’s understanding that conservation is not an obstacle to development, but rather a basis for future prosperity.”

For Kris McDivitt Tompkins, Yendegaia is “the best Christmas present ever, for us and, I hope, for the Chilean people. Creating a new national park is a complex process, but leaves an invaluable legacy for future generations. Chile has a long history of national parks: for almost a century, every president has created a national park. Now Piñera joins this proud tradition, and we thank him for his support.”