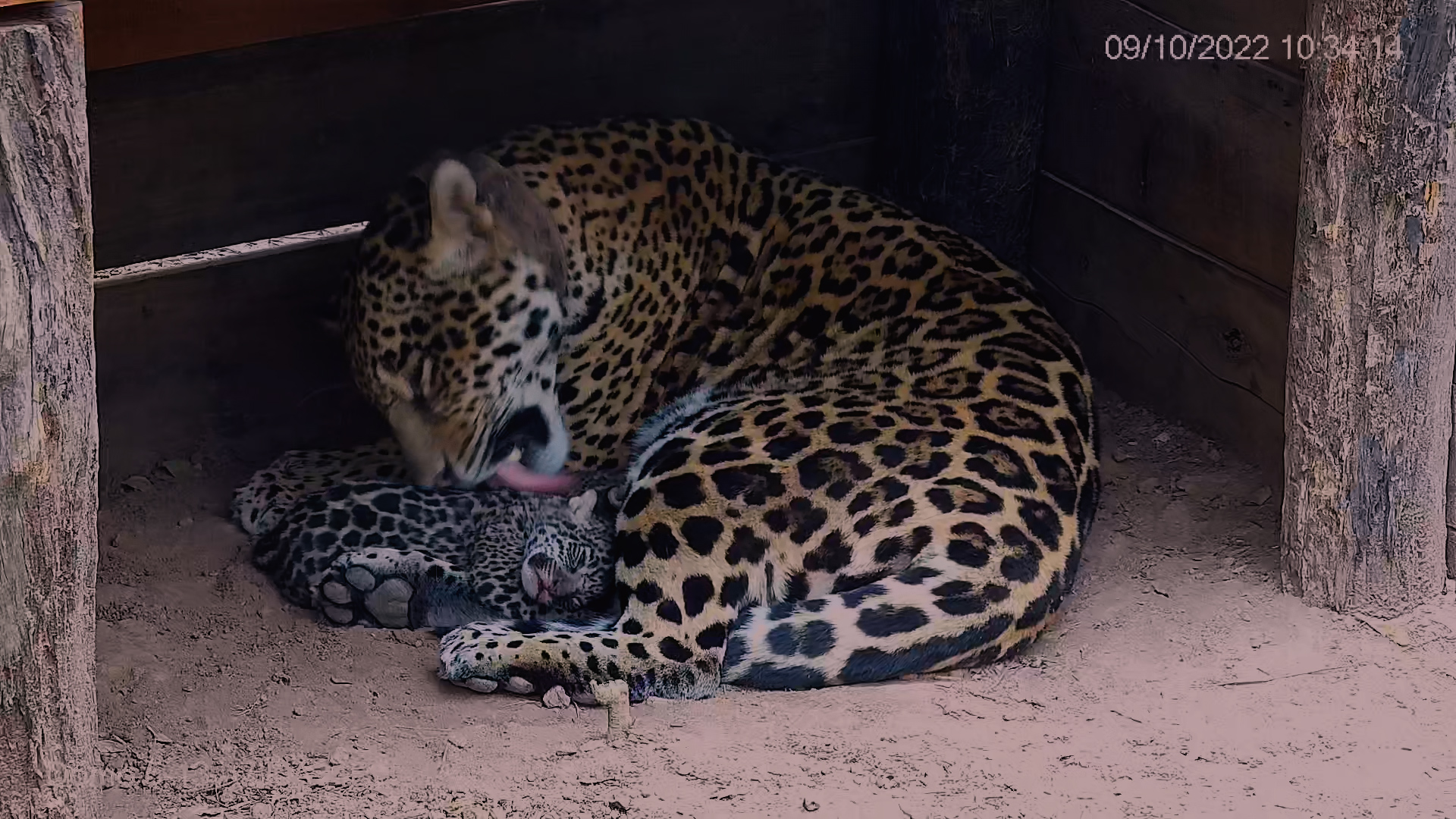 Cubs of Mbarete and Qaramta

Two cubs born of wild jaguar parentage in the Chaco region will bring genetic diversity to a nearby population of reintroduced jaguars in Northeast Argentina’s Corrientes Province, where Rewilding Argentina’s first-of-a-kind rewilding program is restoring the top predator to the massive Iberá Park, a key wetland of South America.

Two jaguar cubs (Panthera onca) born on September 24th in El Impenetrable National Park have been transferred alongside their mother to Iberá National Park, where they will be prepared for release. Thanks to a new collaboration between the Argentine provinces of Corrientes and Chaco, the intervention will boost the genetic diversity of a recently reintroduced population of jaguars.

Argentina’s Minister of the Environment, Juan Cabandié expressed pride in the pioneering team work by national parks and provincial governments, “On behalf of biodiversity and also our culture, our efforts are bringing back this key species to these two regions of northern Argentina, where it had been extinct or virtually extinct.”

The story begins in 2018, when the cubs’ mother, Mbarete, was part of the first litter born at the Jaguar Reproduction Center in Iberá since the species went regionally extinct. The plan is to release Mbarete to the 1.8-million-acre protected area, but first, she was brought to El Impenetrable National Park to mate with Qaramta, the park’s sole registered wild male. Part of the strategy to keep Qaramta safe has been to bring the captive females of the breeding program into the park, attracting him to keep within its boundaries. It’s his second successful mating with a captive female, the cubs born from the last mating will remain in Impenetrable National Park, where they will eventually be released.

Sebastián Di Martino, Conservation Director of Rewilding Argentina commented, “The degradation of nature has reached such alarming levels that traditional ideas of conservation, based on the principles of protecting without intervention, are today challenged by new strategies -such as rewilding- which employ active wildlife management to recover extinct species and heal damaged ecosystems.”

In Argentina, jaguars have lost over 95% of their original range. This year, Rewilding Argentina registered the first wild birth of jaguar cubs in the Ibera Wetlands. After the species’ 70-year absence, there are now twelve jaguars roaming free in the wetlands.

Kristine Tompkins, President of Tompkins Conservation and UN Patron of Protected Areas, congratulated Argentina on the good news. “This tells us that it’s not only possible to fight mass extinction, but significant progress can be made quite quickly, especially when we work together.” 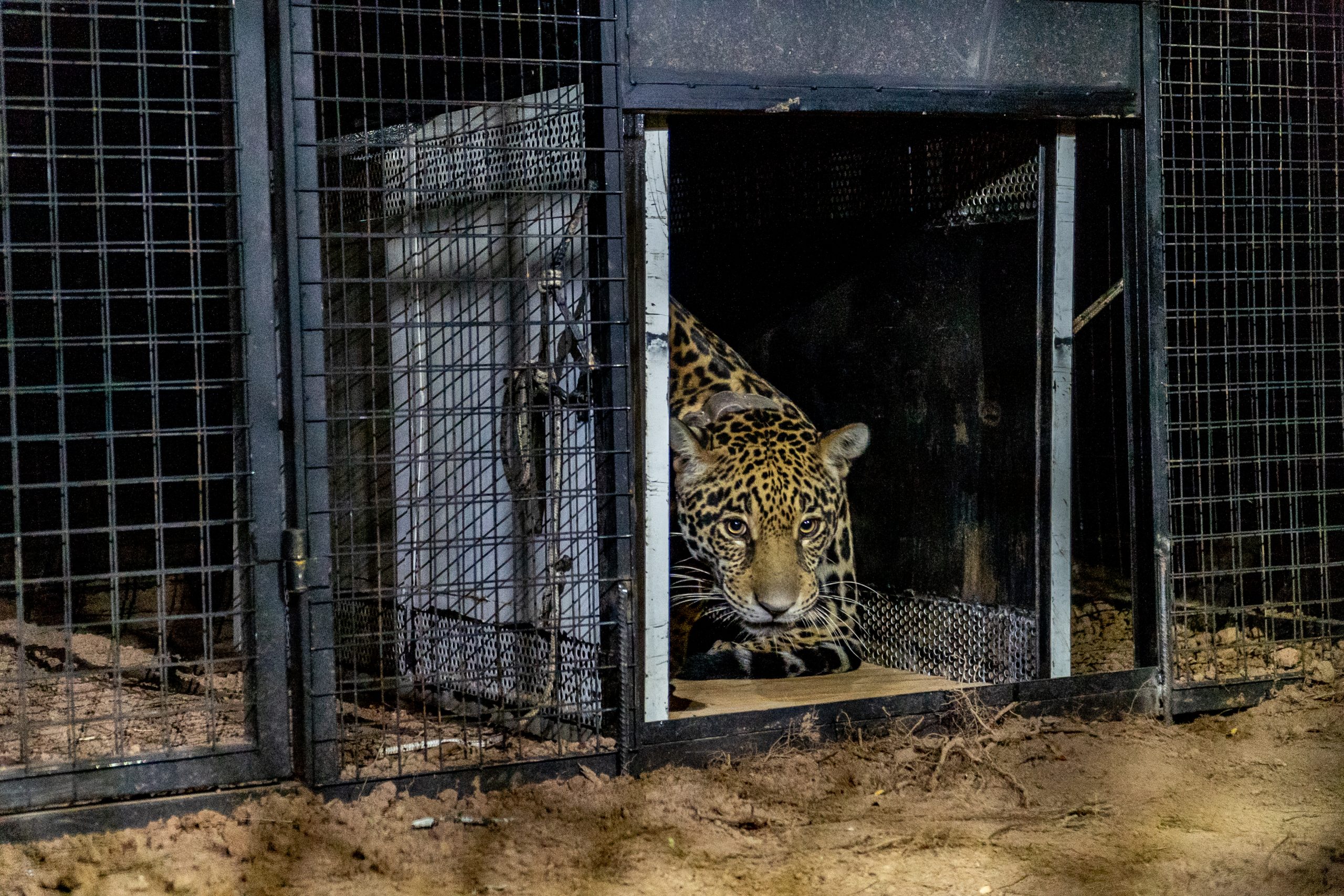 Mbarete returns to the Iberá Wetlands with two cubs born of from her mating with a wild jaguar.

BACKGROUND
The restoration of jaguars to the Iberá wetlands has been made possible by the collaboration between the countries of Argentina and Brazil, the Chico Mendes Institute for the Conservation of Biodiversity, the Federal University of Mato Grosso do Sul, the Campo Grande Wild Animal Rehabilitation Center, the Onçafari team at the Caiman Ecological Refuge, the Government of Corrientes, the National Parks Administration, Rewilding Argentina, its strategic collaborator Tompkins Conservation, and other philanthropists. Re: Wild is the fiscal sponsor of Rewilding Argentina.

Rewilding Argentina is working to bring back a number of species that play a crucial role in Iberá Park, a protected wetland of 1.8 million acres, among them the pampas deer, giant anteater, giant otter, the red-and-green macaw, collared peccary and the bare-faced curassow. In parallel, the nonprofit has helped develop a local economy of nature-based tourism, with 10 gateways to Iberá Park that offer visitor services and wildlife watching opportunities.

A driving force to curb the worldwide climate emergency and the biodiversity crisis, Tompkins Conservation has spent three decades working to rewild a healthy planet with big, wild, and connected landscapes where human communities, animals and plants can thrive. Collaborating with public and private partners, the organization has driven the creation and expansion of 15 national parks, including Iberá National Park, protecting 14.8 million acres.

Rewilding Argentina is an Argentine foundation created to confront and reverse the species extinction crisis, restore functioning ecosystems, and promote local communities’ well-being. The offspring of Tompkins Conservation, Rewilding Argentina has donated over 400,000 hectares to create seven natural parks spanning over 1 million hectares; it has helped protect 90 thousand square kilometers of the Argentine Sea, and is leading rewilding projects with over 20 extinct and endangered species in Argentina.

To see how jaguar habitat is shrinking, check out our new story map.

Jaguars Are Now Breeding Successfully In Argentina Without Assistance