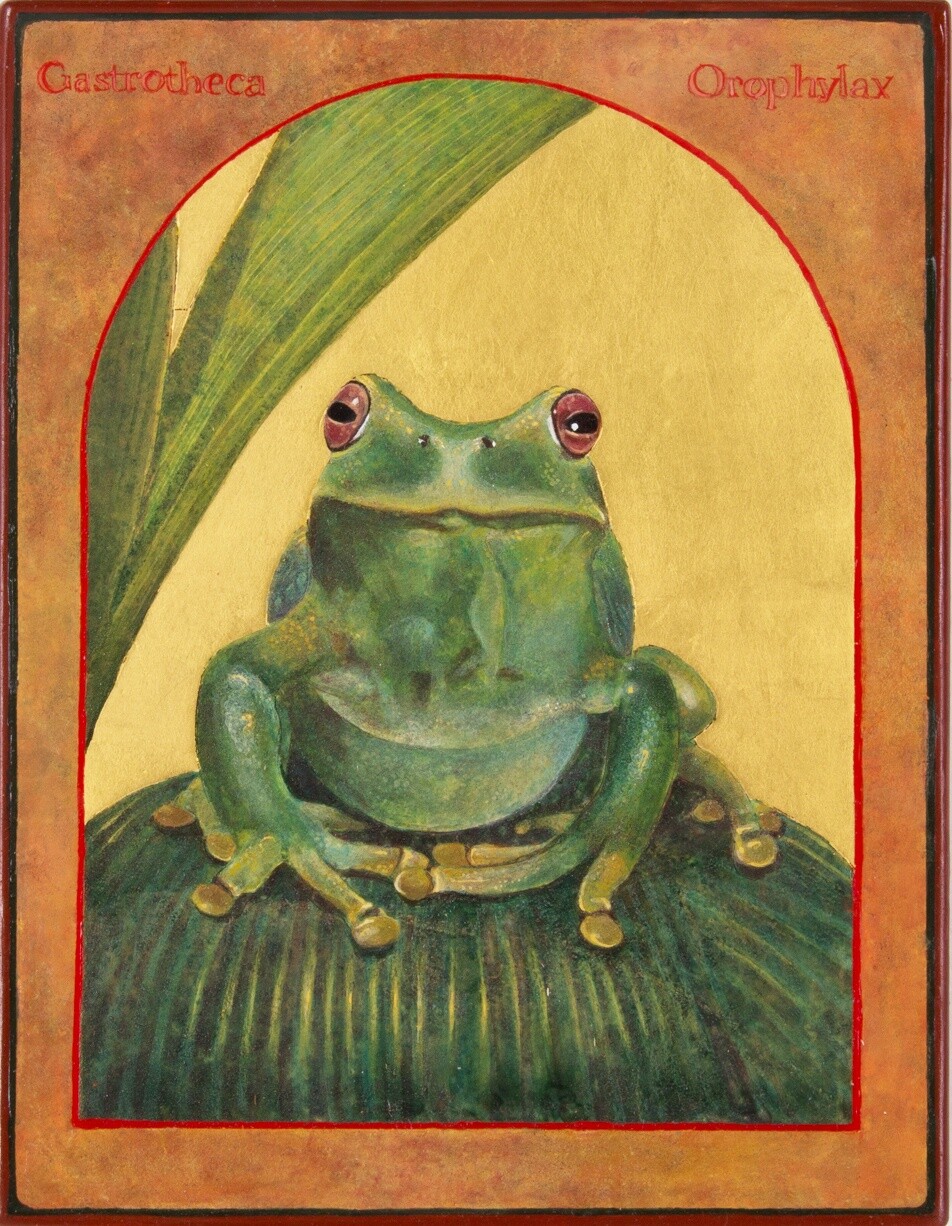 I’ve been a professional artist for forty years. During that time, I’ve always focused my work on what is highest in the human spirit and on the beauty of this world. They have taken the shape of landscapes, space scapes, and traditional and contemporary icons.

The key to my practice, as geologian Thomas Berry once advised me, has been to follow what fascinates me.

About thirty years ago I found myself living out West with no art studio (I’d made a temporary move from New York City) and discovered the opportunity to learn Byzantine Russian icon painting with a master iconographer from Russia. I had always wanted to learn the technique, with its gorgeous pigments made from ground up stones and glittering gold leaf.

I thought I’d learn the basics and run with it to do my own thing. But not so fast! Not only did the materials captivate me, but the ideology that went with them. I’d been brought up Catholic and hadn’t realized until I heard my teacher’s first lecture how poor my religious education had been.  As I continued to practice and hone my skills in this medium, I kept having the persistent feeling that something was missing; Nature was relegated to the backdrop for the human drama in this symbolic system. And, being an informal student of Thomas Berry, I was very much aware that humans are derivative of this Earth. 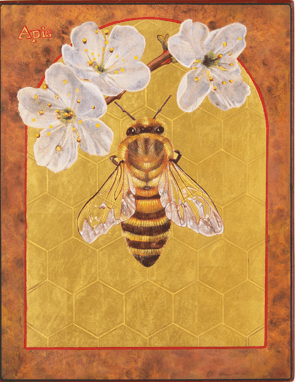 The first icon I made to break out of the traditional mold was an image of the whole Earth from Space, The Earthly Paradise: Icon of the Third Millennium. In earlier phases of my work, I had been heavily influenced by the Apollo astronauts’ accounts of their view of the Earth during their flights, and their experience of our finite planet as alive and our only home. So this was a natural image to select to begin my wandering from tradition and bring my intellect and aesthetics together. 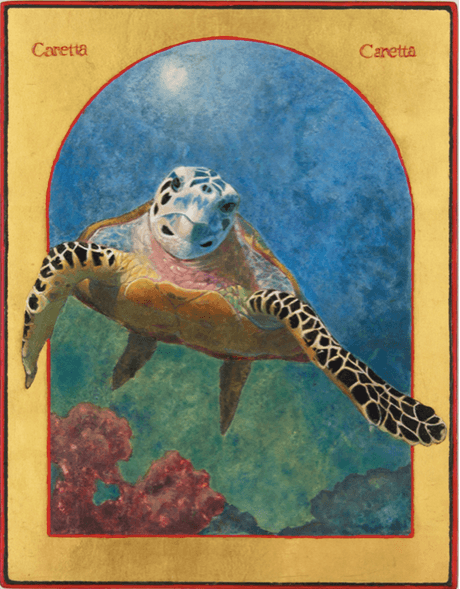 Into a new century, and as I learned more and more about the extinction crisis — from the massive die-off of honey bees, the devastation to Sea Turtles in the Gulf of Mexico, and so many similar stories —  in 2016, I created my first icon of a non-human being, the Honey Bee. It immediately struck a chord in people. 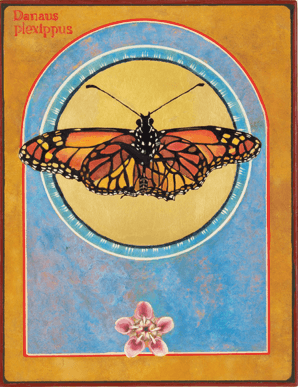 When the opportunity to display my work in exhibition Endangered Earth last December, I shifted into high gear and created nine more icons for exhibition. At the same time, I realized, though I knew my work would draw attention to the plight of these animals, and hopefully help cultivate people’s sensibilities to recognize that the non-human world is as sacred as other religious subjects, there had to be more. That’s when I decided to give half my proceeds to the Center for Biological Diversity, which I have been supporting for a long time, but not as generously as I had wanted. 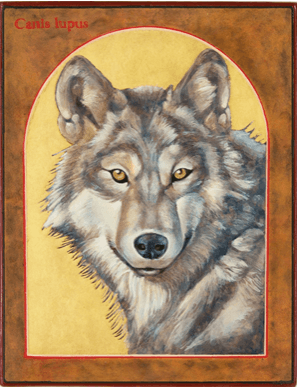 Now, with three pieces sold, I am living my dream of doing what I love, helping to raise awareness and change consciousness, and supporting the people who are on the front lines, securing a future for our brothers and sisters of the non-human world.

Angela writes that these works “fulfill my deep impulse to merge art, scientific understanding and religious sensibilities for the purpose of fostering a more integral, diverse, and beautiful world. My wish is that they also strike a chord in you. 50% of the proceeds from the sale of these originals will benefit the Center for Biological Diversity, an organization devoted to protecting species that I’ve been supporting for many years, to help them carry out their invaluable work.”

Visit Angela’s website to view more Endangered Species Icons and learn more about her beautiful work. Her loggerhead turtle, one of those pictured above, will appear in our upcoming anthology, Rewilding Earth, Best of 2019. ~ editors 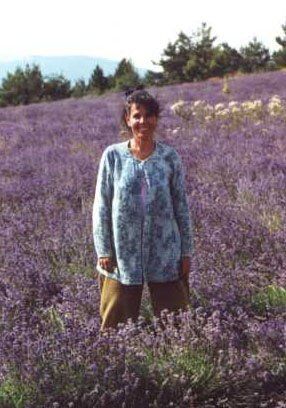 Angela Manno has been a professional artist for the past 40 years. Her virtuosity in a number of pain staking art forms both east and west, ancient and contemporary, put her in a class by herself. Her media includes encaustic, batik, plein air pastel landscapes and traditional and contemporary icons in egg tempera and gold leaf on wood. Her mixed media work including photography, fiber and acrylic, is a synthesis of diverse cultural sensibilities symbolizing unity in diversity – an urgent message for our time.

A graduate of Bard College, Manno studied art at the San Francisco Art Institute, Parson’s School of Design and l’Ecole des Arts in Lacoste, France. Manno is an award-winning landscape painter, having studied with instructors trained at the Cape School of Art, founded by Charles Hawthorne, a contemporary of Monet who taught Monet’s painting technique. In the 1990’s, Ms. Manno added fresco painting to her repertoire, with the completion of a seven-foot fresco at the Palazzo Torlonia, Ceri, Italy and a number of mural projects in the United States.

Manno’s art has been featured in 20 solo and over 80 group exhibitions in distinguished venues in North America and Europe. In 1988, Manno was commissioned by NASA to commemorate the U.S. return to space flight with the launch of Discovery, the first after the Challenger accident. In 2000, her one-woman traveling art exhibition Conscious Evolution: The World At One became part of the permanent fine art collection of the Smithsonian Institution’s National Air & Space Museum. Ms. Manno has taught and lectured widely on her work through university and museum programs including Parsons School of Design in New York. Her artwork has been noted in numerous publications.