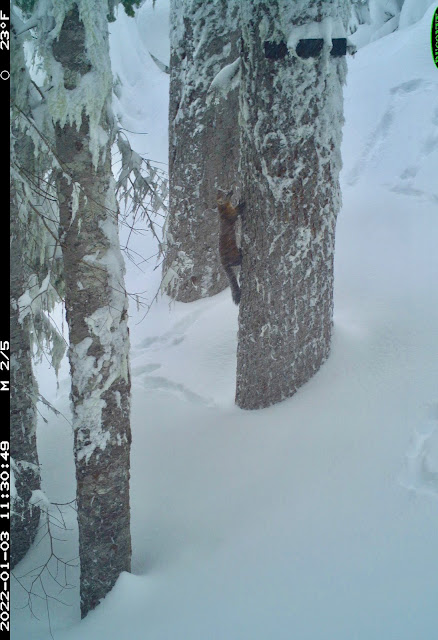 As part of an ongoing collaboration, Woodland Park Zoo partnered with Olympic National Forest last summer to install six motion-triggered camera and scent dispenser stations in the National Forest in hopes of detecting martens, a rare native carnivore thought to be occurring there in only very sparse numbers. A month ago, the survey team returned to the station and discovered multiple photos of a single Pacific marten, which had visited the station in January 2022.

Only two dozen marten sightings have been confirmed on the Olympic Peninsula in the last half century, with half of these attributed to surveys with remote cameras and scent dispensers over the last few years and all in Olympic National Park.

On the Olympic Peninsula, martens once occupied a broad elevational range, from coastline to timberline. However, due to over-trapping and habitat loss in the 1900s, they appear to be gone at lower elevations and to occur at very low densities at higher elevations.

From 1968–2016, only nine reliable marten records were recorded on the Olympic Peninsula, despite extensive camera surveys beginning in the 1990s. Then, in 2017, Woodland Park Zoo partnered with Olympic National Forest, Olympic National Park, and U.S. Geological Survey to conduct overwinter surveys, pairing cameras with scent dispensers programmed to release a small amount of attractive lure on a regular basis. Originally developed by the zoo in partnership with Microsoft Research and Idaho Fish and Game, these dispensers dramatically increase the period of time over which carnivore survey stations can be left operational in remote locations (up to a year) without biologists having to revisit for rebaiting or maintenance. 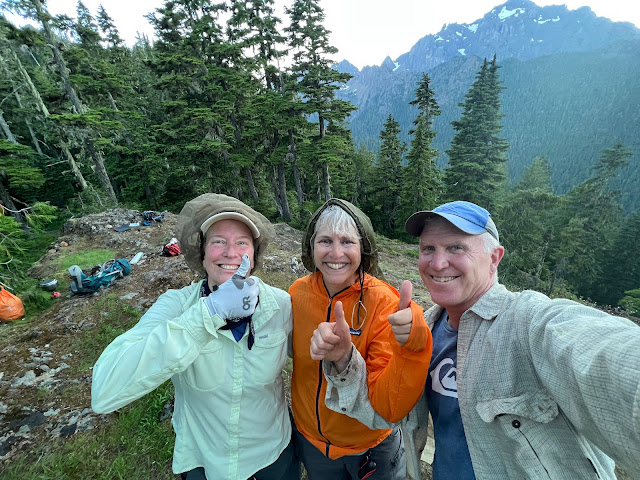 Howell, MacKay, and Long after discovering the footage of the marten! (Photo by Robert Long/Woodland Park Zoo)

“Martens and other carnivores are important to the community ecology of Northwest ecosystems. The zoo is thrilled to be able to bring our innovative survey methods to this collaborative project, and eager to help secure a future for martens on the Olympic Peninsula,” said Robert Long, PhD, Senior Conservation Scientist and Director, Living Northwest Program at Woodland Park Zoo.

Since 2008, Olympic National Forest has been working with many partners, including Woodland Park Zoo, to survey for Pacific martens. With concern about historic impacts to the species—trapping and habitat removal—and current threats presented by climate change, this effort has involved federal and state agencies, non-profit organizations, volunteer community scientists, many hundreds of hours of labor and the collection of thousands of remote camera photographs.

In 2022, Woodland Park Zoo and partners Olympic National Forest, Olympic National Park, and University of Washington, with additional support from Olympic Park Associates and Washington’s National Park Fund, initiated a University of Washington graduate student project to extensively survey martens on the Olympic Peninsula. This project is aimed at gathering critical information about the current distribution and status of the Olympic Peninsula’s marten population so agencies can make informed decisions about marten conservation. Possible threats to this presumably small population could include inbreeding depression, habitat-related concerns, and climate change-driven loss of deep snowpack at high elevations. 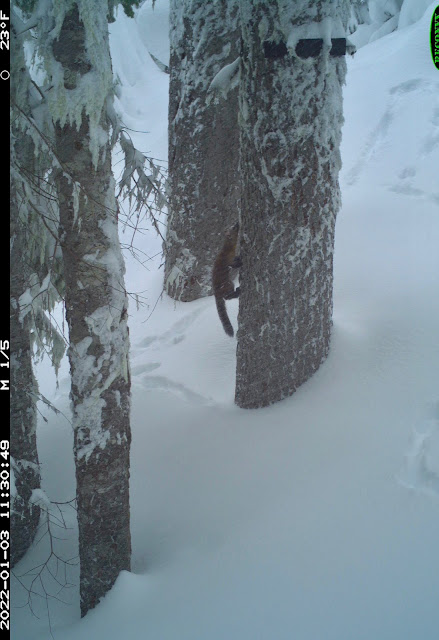 Join us in saving species and spaces around the Pacific Northwest through our Living Northwest Program, with projects dedicated to western pond turtles, pollinators, urban carnivores, wolverines, Canada lynx, and other wildlife. Anyone can share how they are living Northwest using #IAmLivingNorthwest on social media—you may even be featured on our new screen at Living Northwest Trail. Learn more ways to Discover, Recover and Coexist in the Northwest.
Read more about how biologists are trying to ensure that wolverines, fishers, and martens have a future in Washington in Paula MacKay’s “A Tale of Three Weasels.”

Woodland Park Zoo’s Living Northwest Program focuses on recovery of threatened species in the Pacific Northwest and helping people and wildlife coexist in this shared landscape.