Life on the Brink – Do People Have a Right to Take It All? 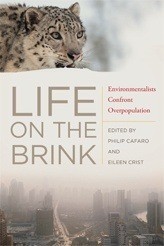 Life on the Brink aspires to reignite a robust discussion of population issues among environmentalists, environmental studies scholars, policymakers, and the general public. Some of the leading voices in the American environmental movement restate the case that population growth is a major force behind many of our most serious ecological problems, including global climate change, habitat loss and species extinctions, air and water pollution, and food and water scarcity. As we surpass seven billion world inhabitants, contributors argue that ending population growth worldwide and in the United States is a moral imperative that deserves renewed commitment.

Hailing from a range of disciplines and offering varied perspectives, these essays hold in common a commitment to sharing resources with other species and a willingness to consider what will be necessary to do so. In defense of nature and of a vibrant human future, contributors confront hard issues regarding contraception, abortion, immigration, and limits to growth that many environmentalists have become too timid or politically correct to address in recent years.

Ending population growth will not happen easily. Creating genuinely sustainable societies requires major change to economic systems and ethical values coupled with clear thinking and hard work. Life on the Brink is an invitation to join the discussion about the great work of building a better future.

“Like population and consumption, equity issues and environmental issues are conjoined twins. So we hope you’ll read Life on the Brink to help sort out these matters.”
—From the foreword by Paul and Anne Ehrlich

About the authors
Philip Cafaro is a professor of philosophy at Colorado State University. His books include Virtue Ethics and the Environment and Thoreau’s Living Ethics: Walden and the Pursuit of Virtue (Georgia).

Eileen Crist is an associate professor in the Department of Science and Technology in Society at Virginia Tech. Her books include Gaia in Turmoil: Climate Change, Biodepletion, and Earth Ethics in an Age of Crisis.

Praise for the book
“The desire for families is built into our genes; and since people
have a right to reproduce, more people living a more abundant life is a perennial hope. But seven billion and escalating to ten or twelve? Too many people is arguably the most serious problem on the world agenda—for the adverse effects on human flourishing, on land health, and on biodiversity. . . . Cafaro and Crist have gathered much of the best recent work analyzing these daunting issues. In the new millennium no one can claim to be well educated, or moral, without facing ‘life on the brink.’”
—Holmes Rolston III, Colorado State University

“For decades, overpopulation deniers have claimed that those who advocate population stabilization or reduction do so to retain privileges; are motivated by racist, sexist, or colonialist views; or do not understand economics. Life on the Brink courageously argues that intelligent and compassionate action in our world demands that we reduce our numbers as quickly and humanely as possible. Its urgent message should be widely read and acted upon.” —Bron Taylor, author of Dark Green Religion: Nature Spirituality and the Planetary Future

Thanks for posting this. Many of the contributing authors are active within the discipline of environmental ethics and philosophy, where folks are asking the tough questions about what is on and off the table and why when it comes to protecting the environment. To have a real conversation about what is best for the planet, we must expose and confront our cultural biases through discussions like this.

Along with human population control, we should have the grace to organize to replace killing license funding of state agencies with general public funding, democratic education and participation in governing nature and wildlife in our states, and Natural Resources Boards that are scientists, representative of the best and evolving science on climate change, reversing the trapping and recreational destruction of top and mid-range predators as trophy for the few to farm for higher deer, elk, turkeys and ground-nesting birds for the recreational killing by the few. The plight of coyotes, bears, and even our endangered wolves is emblematic of the massive destruction of our fellow wild brethren at a time of habitat and fragmentation pressures that give them no place to live.

The Declaration of the Rights of Mother Earth and All Beings gives all beings the right to live and not be harmed or caged by humans and to live out their natural role in natural habitat. This has been presented to the United Nations and installed in the constitutions of Ecuador and Bolivia.
Even Africa is starting to close its doors to the “great white hunter” and his great white ego rape of the continent. Tigers, elephants, rhinos, bears and wolves and large sea mammals are being pushed quickly to extinction.

We must change the structure of state agencies and mobilize the general public to the alarm being trumpeted by those who understand how quickly wildlife populations are plummeting and how invertibrates, pollinators and amphibian ancient species are being extinguished endangering us all.

One of my biggest frustrations, as a wildlife photographer and citizen naturalist, is the cultural silence on an issue so obviously at the root of much ecological calamity. I look forward to reading these essays and will pass the information along.