(September 4, 2012)  The DC-based group Progressives for Immigration Reform (PFIR) recently announced a major new project: an Environmental Impact Statement (EIS) on U.S. immigration policy.  PFIR has also unveiled the website for the new project, and invites public comments on the proper scope and parameters of the study.

With this Environmental Impact Statement (EIS), Progressives for Immigration Reform aims to help concerned environmentalists and policy-makers answer these questions.

The main policy decision to be evaluated in the new EIS is the following:

At what level should Congress set annual immigration into the United States?

According to Dr. Philip Cafaro, a principal investigator in the study: “The EIS will identify a number of plausible alternative immigration scenarios, regarding how many immigrants to allow into the country annually. The study will then develop demographic projections specifying future U.S. populations in fifty and one hundred years, based on these different annual immigration rates.” This will be followed by detailed analyses examining the likely ecological impacts of different population sizes in six key areas:

In the end, a number of plausible alternative immigration scenarios will be comprehensively compared, in order to clarify the ecological implications of choosing one or another of these demographic futures. According to Leah Durant, Executive Director of PFIR: “The EIS project aims to develop a thorough, objective analysis of the ecological impacts of U.S. immigration policy, so that policy decisions can be made in full knowledge of those impacts.”

PFIR hereby solicits public comment on the scope and methodology of this new Environmental Impact Statement on U.S. immigration policy. This initial “scoping” phase of the study will last through October 1.  They want to hear from you! More information can be found by visiting http://www.immigrationeis.org/.

Note: PFIR’s researchers have begun considering alternative demographic scenarios for the EIS. Starting from a recent (2010) population of 309 million, we modeled four annual immigration scenarios. To make the scenarios more realistic, we phased these annual levels in over ten years, from a current legal immigration level of 1 million annually. And to give a sense of how important relatively small annual differences can be in driving total population, we projected out ninety years to 2100. 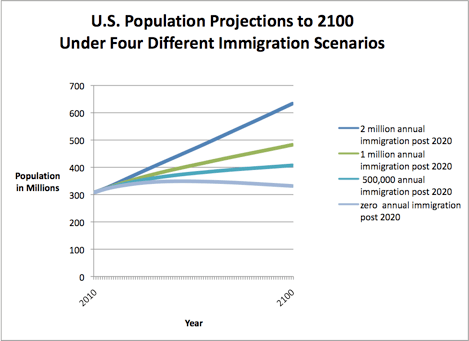 At zero annual immigration, America’s population increases slowly for thirty years or so, and then just as slowly decreases to 332 million total, for an overall increase of 23 million. That is pretty close to national population stabilization.

With continuing immigration levels of 1 million annually, America’s population instead increases by 173 million, to 482 million total. Just as important, it continues on an upward trajectory with no stabilization in sight.

If Congress followed the recommendations of the 1997 Jordan Commission on Immigration Reform and cut immigration to 500,000 annually, our country’s population would still grow significantly, to 407 million by 2100, for an increase of 98 million. Population stabilization would at least be in sight by then, albeit at a much higher level.

Finally, if Congress raises today’s immigration levels to 2 million annually (approximately the levels proposed by the Kennedy/McCain immigration bill of 2006), America’s population will increase by 324 million people by 2100. That’s a total population of 633 million people—over twice as many as in 2010. And of course, the population in 2100 would be set to increase a lot more for many years to come.

As impressive as the huge differences in population projections are under these four different immigration scenarios, it is probably just as important that the higher annual scenarios commit us to continued population growth beyond 2100, while the lower scenarios either achieve or put us within range of population stabilization.

Perhaps if we imagine little arrows on the ends of the four lines in the chart above, we can remember that they represent absolute numbers and set us on different demographic trajectories, and that both these aspects are important. Alternatively, we can graph these same four immigration scenarios somewhat differently, as in the chart below.

These are just preliminary projections. However, they give some indication of how relatively small annual changes in immigration levels can lead to relatively large differences in absolute population numbers within a few decades.