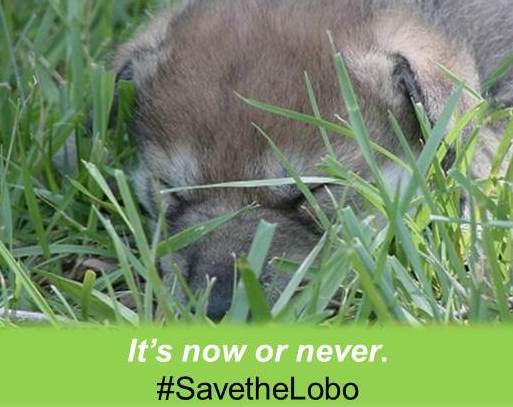 Join Lobos of the Southwest for an informative presentation about Mexican gray wolves to learn more about an upcoming opportunity to make a real difference for their future! Chat with fellow conservationists and get support writing your comment on the Mexican Wolf 10(j) Rule!

On January 24, 2022, at 5 pm MST, Lobos of the Southwest will be hosting a free webinar and comment writing workshop. Register here.

Keep reading to learn more about why this matters and why wolves need you to take action now!

Background:
At the end of 2020, only 186 Mexican gray wolves roamed in Arizona and New Mexico, and only about 35-40 could be found in Mexico, making these wolves among the rarest native species found in the Southwest.

The U.S. Fish and Wildlife Service (USFWS) is revising its 2015 Mexican gray wolf 10(j) Management Rule, which a Federal court found does not rely on the best available science and violates the Endangered Species Act by failing to conserve the endangered Mexican gray wolf.

October 29, 2021 to 11:59 p.m. Eastern Time January 27, 2022 marks a 90-day public comment period, which is your opportunity to demand that the agency follow the court order and base the revised management rule on independent academic science rather than political pressure.

A science-based management rule would:

Science tells us we need at least 750-1000 Mexican gray wolves in several populations (three in the United States and one in Mexico).

We have an opportunity to tell USFWS to follow the science and eliminate the existing population cap (325 wolves) and remove or revise the northern boundary, currently marked at Interstate-40.

How You Can Help

Send a written comment to U.S. Fish and Wildlife Service before January 27, 2022.

You can find the full proposed rule here and the draft Supplemental Environmental Impact Statement here.

You can personalize these talking points:

It’s important to add a paragraph or more of unique information that you have personalized to ensure your comment is counted. Your comment should also include references and citations that are relevant to the Mexican Wolf 10(j) Management Rule.

Not sure how to personalize a comment? Attend our comment-writing workshop or check out this video on how to make your comment count!

As always, be respectful in your comment and stay focused on the substance of your request to improve the 10(j) Rule to better conserve Mexican gray wolves.

Lobos of the Southwest

Lobos of the Southwest is a collaborative effort of conservation organizations, scientists, and concerned citizens working together to save the endangered Mexican gray wolf. Learn more about us at mexicanwolves.org.