By Richard Grossman on March 29th, 2021 in Human Overpopulation vs. Population Stabilization

Plan a “Fair Start” with HAVING KIDS 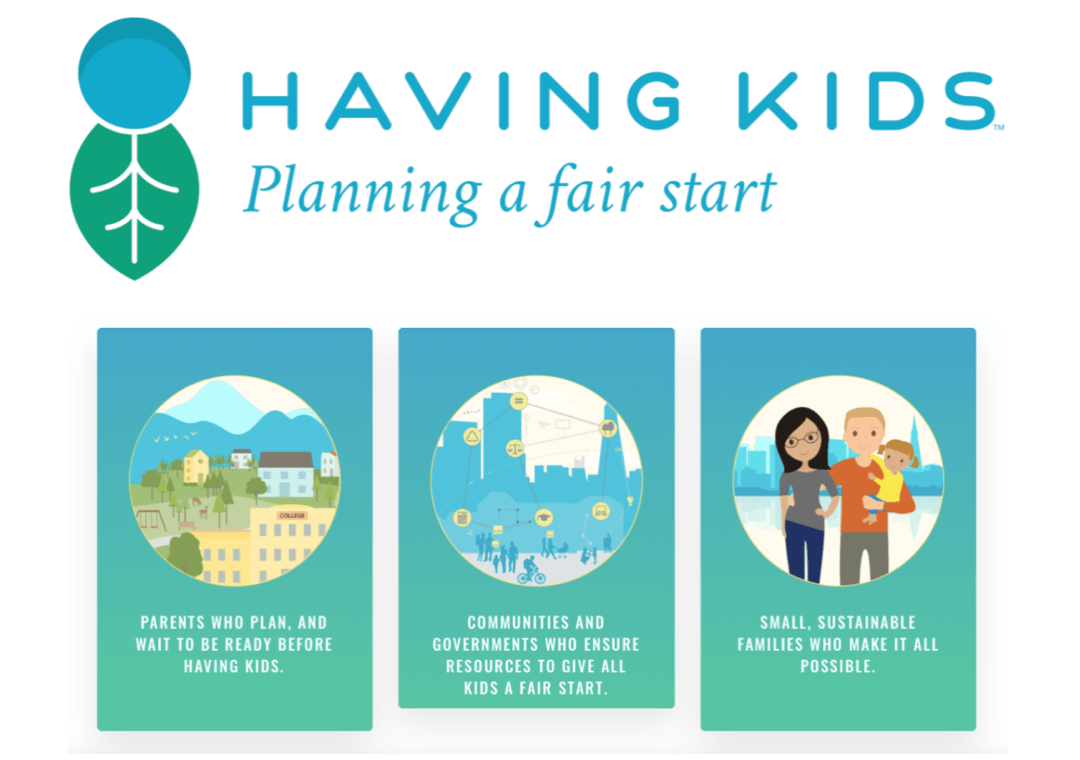 Having Kids is the name of a relatively new organization that has several goals—but its ultimate goal is to organize society so that it is more friendly for children—and for their parents.

As I understand it, their key ideas include increasing the intentionality of planning pregnancies, having governments and communities that are more supportive of both the kids and the new parents, and awareness of the impact of children so parents will choose to have small families.

If this sounds interesting to you, please join the program on Thursday, April 1st, 7 PM Mountain Daylight Time to learn more—details below. In addition, a recording will be available starting Friday, April 2nd for 6 days.

“…to bring a child into existence without a fair prospect of being able, not only to provide food for its body, but instruction and training for its mind is a moral crime, both against the unfortunate offspring and against society.”                 — John Stuart Mill, 1859

I took care of an infant with bad burns when I was in general practice. He was not seriously hurt, but I would have missed the backstory if I hadn’t made house calls.

My three years as a GP were in a small town where I got to know people much better than if I only worked in the clinic. It has been almost half a century ago, so some parts of this story are hazy. The little room where the teen mother and her baby lived still seem clear, however. I was there for a visit to change the bandages and to check on the burns. The 8-month-old baby was fussy from the pain he felt as I removed the bandages, examined, and then redressed the wounds.

Since this was not our first visit together, I was hoping to get some insight into how this little boy had scalds on his feet and legs.

“I didn’t want him, anyway,” the young mother answered. “He was fussy so I put him in the tub to calm him down by giving him a bath. He was still crying and standing, holding on to the knobs. I turned on the “hot”—I guess to punish him.” There was nothing I could do in that little town except to offer birth control to the frustrated mother.

Probably having children is the one thing that has the greatest impact on us as individuals and on society. Yet it seems that many people don’t give parenting as much thought as buying a car.  Unfortunately, many children in this country are conceived by accident, as was the case with the young mother with the scalded child. Almost half of pregnancies are unintended. Studies by Dr. Henry David have shown that children suffer if they were unwanted and their unfortunate mothers had to raise them.

There is an alternative. The purpose of the organization Having Kids (www.havingkids.org) is to increase the intentionality of childbearing and to change reproductive norms. It also hopes to make society more supportive of children and of parenting.

They call what we have now the “isolation model.”In this model: “… potential parents are seen as individual entities apart from their prospective children and the communities in which they live, whereby the rights of prospective children are not recognized and the voices of communities are not heard.” In our model parents decide how many children to have with little regard to the interests of the child(ren) or of society. Furthermore, it is assumed that women will all become mothers.

The “isolation model” doesn’t take into account environmental deterioration, mass extinction of species, climate chaos, or the other litany of problems global society faces. Nor does USA society deal well with the needs of early childhood development.

Having Kids presents a new, child-centered model. Their goals include having parents consider the state of the environment when making decisions about childbearing. They want all children to have a fair start in life, with a minimum level of food, love, attention, healthcare, etc. They believe that children should be brought up without violence and kids should have some control over their lives, thus forming the basis for a just and democratic society.

A key part of Having Kids is to advocate for small families. They point out the many advantages of single-child families, including a smarter, more productive child, less frantic parents, and more resources to raise the kid.

If you would like to learn more about Having Kids, please join the Lifelong Learning program Thursday, 1 April. You can logon a few minutes before 7 PM (MDT) by going to: www.fortlewis.edu/LLL. The speaker will be Catharina Hughey, a leader of this innovative program. Her topic is: “Childbearing in the Era of Climate Chaos.” Please pass on this information to people of childbearing age!