By Christopher Spatz on April 2nd, 2021 in Featured, Poetry 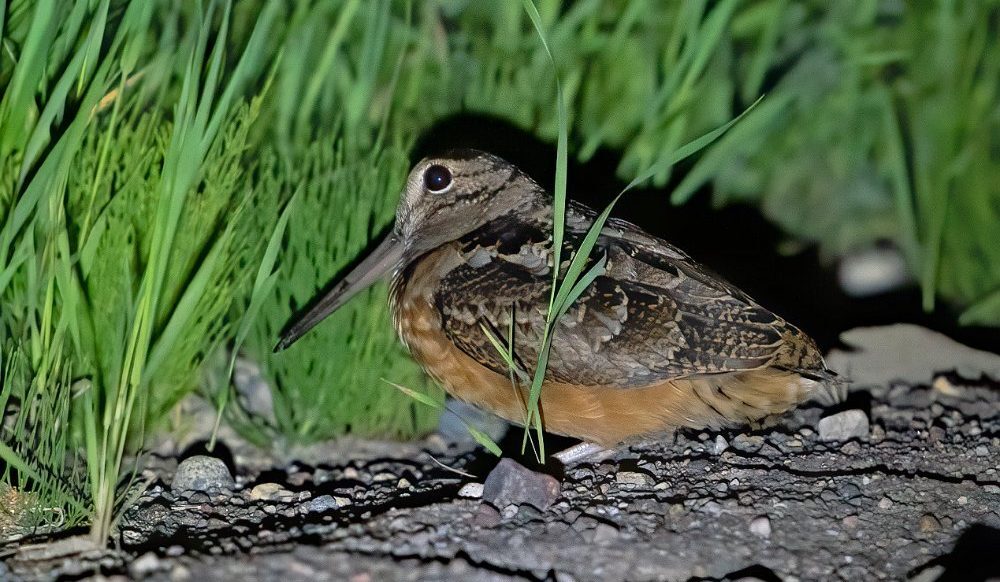 —for Joan and Peter Wood

Mid-March in the Clove, between the Backslabs and Lost City,
shadow spreads across the Coxing, creeping along the marsh,
round the mounds of tuft. Having played for a day,
water returns to dream as ice.

Bzeep…bzeep…bzeep…too soon for bugs, then this lump of leaves
skeets whistling past backlit in yellow above the trees.
The valley’s imagination, at last, is up; desire’s tremolo begins
to finger Spring from the piccolo bill of the homely woodcock.

A sandpiper on dachshund legs, eyes like black roe
hatch where his ears ought to be, to periscope bob for bobcat
as lips plumb mud until he wrings and sucks
the coiling worm still, taking its dervish death

into the purple height of silence;
having astonished, Eros vanishes.

Drawn from thorn and muck
the Soul stirs, in grass and twig, in rock and lobe,
tip-toe listening, waiting, waiting. At Winter’s end
Beauty has pronounced her last sentence.

First starlight, from the cold dome comes
the oblong missile smashing off the anvil air
here, and here, then everywhere arc
warble-twitter-trills spraying calliope down

from rim to rim in the pitch of sweet relief.
Halts, melds his bits with the last light
above the thickets, returns dumb as a drop of blood
thumped in the mit of the heart, returns

as the broken god to giggling, to the smitten.
Too late for bobcat, no pounce will jolt those clouded eyes.

I will leave him here among the rushes, beside the melted Coxing,
for the woken bugs to pluck and tuck his arabesque
into the guts of love breaking from the Clove,
breaking already in echo.

In coloratura amid the din of browns, crocus,
and hanging in the clang of yellow-belled forsythia:
echo of woodcock beginning
what has begun.

This poem was published 20 years ago in a short-lived digital Hudson Valley literary journal called Half Moon Review. I thought it was time perhaps for a reprise.