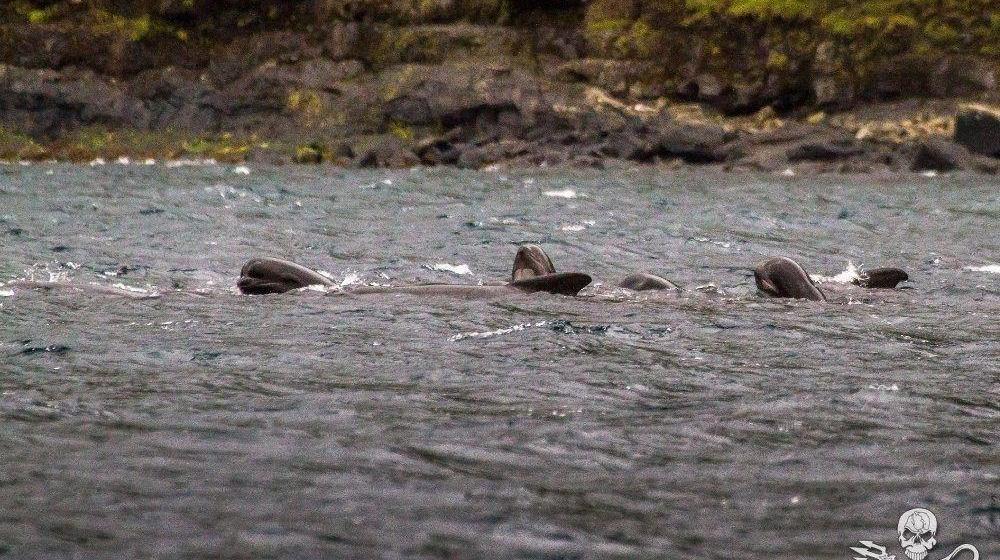 A pod of 20 pilot whales, many with young calves entered Haraldssund Fjord between the islands of Kunoy and Bordoy in the Northern part of the Faeroe Islands late Wednesday spurring the local whale killers to make ready to slaughter them.

But with the weather turning nasty they did not launch their boats feeling certain that the pilot whales would remain in the Fjord until the morning. The Grind was not officially launched meaning that Sea Shepherd volunteers did not break any laws by escorting the whales back out to sea.

The Thor and Mike Galesi were able to escort the whales back out to sea.
Sea Shepherd/Marianna Baldo

Lamya Essemlali however was able to get two of her small fast boats, the Thor and the Mike Galesi to the Fjord and despite the stormy conditions, they were able to escort the whales back out to sea using the same techniques the whalers use to drive them onto the beach.

The boat crews (three crew per boat) were working two miles off the shore.

Needless to say the local whalers are not happy. However the Sea Shepherd volunteers are indeed satisfied that the risks they took weathering the conditions paid off with the whales escorted to safety.

The pilots of the two small boats Jesse Treverton from the U.K. and Bastien Boudoire from France did an extremely competent job in a very dangerous situation. The whales were escorted far out to sea and the boats have returned safely.

Also thanks to the courage of the boat crews: Marianna Baldo and Fabio Fassone from Italy, Julian Cruz, Michael Abba, and Lamya Essemlali from France.

“We are all glad at Sea Shepherd that no whales have died today and that those who entered the waters of Haraldssund Fjord were able to swim back safely to the open ocean. Yet, none of us see this is as a victory over the Faroese people, this is a victory for the whales,” said Sea Shepherd France President Lamya Essemlali.

Kudos to the Sea Shepherd land volunteer crew for spotting the whales and for keeping a vigilant watch during the night. We need to see that the whales remain offshore.

The local Schussleman of Klaksvik has threatened to sue Sea Shepherd for the whales that escaped.

This is the day that Sea Shepherd volunteers have been patrolling the Faroe Islands to oppose the slaughter of pilot whales and dolphins. There are 70 volunteers on the islands presently.