By TRI on September 18th, 2013 in Spine of the Continent (Western) Wildway 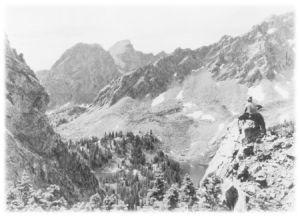 30 years of protection frame our hike through the Lee Metcalf Wilderness: late August

After four days hiking through the Bechler River area in the Southwest corner of Yellowstone Park, John Davis of TrekWest fame arrived at Old Faithful where he was whisked to Bozeman, Montana, on the evening of August 20. A day of media events followed; the evening lecture drew 60+ people, not bad for Bozeman on a Wednesday summer night. We planned a mid-day start for the next leg of the trek, but visits to towns are few and far between, and the business of conservation requires internet access, phone calls, meetings, and shopping at used outdoor gear stores. In other words, it was after 5 PM when we set out from the trailhead at Cache Creek in the Taylor Fork drainage. After a gradual one-hour climb, we crossed into the Lee Metcalf Wilderness. 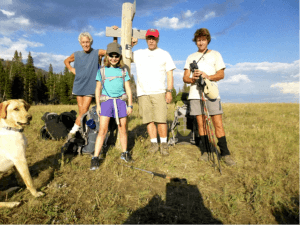 Lee Metcalf was Montana’s senior senator in 1983 who championed the bill to set aside 259,000 acres. The original proposal was much larger, and included much more wilderness to the east in the Gallatin Mountain Range. Congress whittled down the bill at the behest of commercial interests into 4 separate smaller units. Despite intense development around the resort area of Big Sky, however, the units are still fairly well connected for wildlife by wilderness study areas along the Gallatin Crest and conservation easements such as the Jack Creek Preserve between the Spanish Peaks Unit and the Taylor-Hilgard Unit. 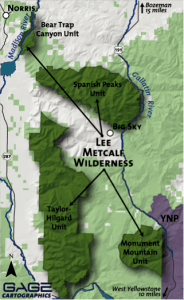 It is time to renew Lee Metcalf’s vision and protect this whole area as one interconnected block of full wilderness.

Our route went through the center of the Taylor-Hilgard Unit with the Taylor and Hilgard Peaks to the south forming high basins full of alpine lakes. We passed under Sphinx Mountain to the north as we followed Indian Creek until it flowed out of the forest into the Madison River Valley.We covered about 3.5 miles the first day, camped in the trees next to Raw Liver Creek for the night, and continued for another 11.5 miles the second day. 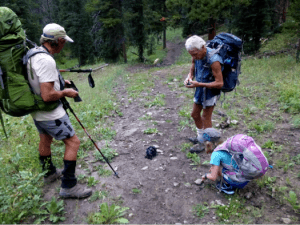 During our mini-transect, we counted 18 large piles of bear scat, bear tracks and a grizzly dig; we could only guess how much there might be out of sight in forests and meadows. The area we hiked through is important habitat for grizzly bears, wolves, elk, wolverine, black bears, mountain lions, and other species. The only large mammals we saw were moose, but there were certainly many animals who knew that we were there. Indian Creek and other drainages like Papoose Creek are important travel corridors for elk as they migrate in and out of Yellowstone Park.

We saw little sign of elk during our trek as they were still in the high country, and their behavior has likely changed now that wolves are present. Wolves were re-introduced into Yellowstone Park in 1995. Fourteen wolves from several Canadian packs were released at three locations in the northern range. By 2011 there were at least 100 wolves in 10 packs in the park and many packs in neighboring habitat such as the Taylor Fork. Today they are no longer listed as threatened in Montana and are actively hunted. One of the biggest hunting controversies involves hunting immediately adjacent to Yellowstone Park where Park wolves, who are habituated to people, are often shot as soon as they walk across the invisible park boundary. A reasonable compromise would be to establish a no-hunting buffer zone around the Park so that wolves who live primarily within the Park will not be killed within their normal territories.

We reached the trailhead at the end of our hike around 2:30, only 2 and a half hours later than planned. This 11.5-mile journey was the longest that Willow, who is 10, had ever hiked. 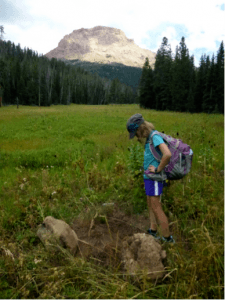 She was convinced that this day would never end, but she finished the hike in fine shape. Rob Ament and Renee Callahan, with the Center for Large Landscape Conservation, had grown tired of waiting and had retired to a coffee shop in Ennis, leaving a note on our car. We joined them there, and John began the next leg of his journey as they drove through the upper Madison River Valley and looked at important corridors across these private lands that connect to the Gravelley and Centennial Mountains to the west. The Craighead Institute has been studying connectivity in the region for over 15 years and is working with local government, landowners, and agencies to maintain habitat in critical corridors for wildlife.  Priority areas on private lands are shown on the attached map; our route through the Lee Metcalf is shown with yellow dots.