A Poet Questions A Quarry 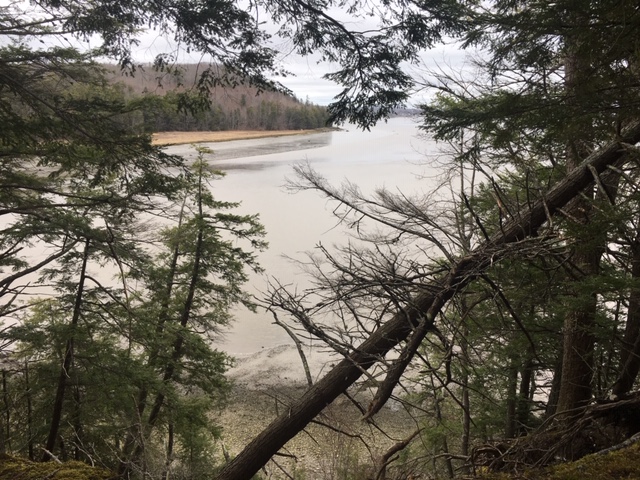 I have always had a place in my heart for Prospect, Maine. My grandfather Lester Dow and my grandmother Hannah Clark Dow lived in Prospect. My mother Ruth Dow Lawless spent her childhood there. Grandfather Lester had a store at the crossroads in the early 1920s. He served as town clerk, town treasurer, and on the school committee. Lester and Hannah are buried in the Prospect cemetery, next to the tiny schoolhouse where my mother first went to school. 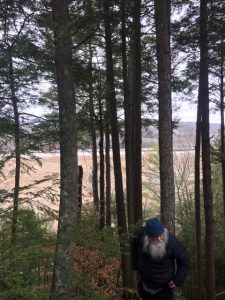 Last Spring my wife and I walked on the end of Bowden Point, on a piece of land purchased by the Maine Coast Heritage Trust (a failed subdivision) which will eventually pass along to state ownership. We saw deer, and a bald eagle, and came to a point looking out to the confluence of the Marsh and Penobscot Rivers.

We looked to the west, following the Marsh River back into the Howard Mendall Wildlife Management Area. This sedgy marshland is a wonderful habitat for birds and fish, and a number of other species, and a rich stopover for migratory species. A look at the ebird internet site lists fairly recent sightings of 129 bird species here, including bald eagles, salt marsh sparrows, Nelson’s sharp-tailed sparrow, American black ducks, and many more. The Marsh River flows into the Penobscot here, just above Bucksport, with that river’s migratory fish as well.

A Virginia-based company has created a business called Bowden Point Properties. They have purchased much of Heagan Mountain, on Bowden Point, where they propose to quarry and “process” granite, then load the product onto barges at a 710-foot pier they plan to build. Their plans include the quarry itself, an 80,000 square foot processing building on a 50-acre site, and an access road leading to a 710-foot pier.

This raises more than a few questions. The quarry itself would require blasting, and then the processing would create granite dust, so noise, dust, and air quality are issues (would the dust go to Fort Knox, to Bucksport?). Then there would be a haul road. Then there would be the building of a 710-foot pier into the river (why so long). There would be new barge traffic on the river. The company calls for dredging – what toxins would that dredging stir up – with that region of the Penobscot already home to mercury, dioxin, and other heavy metal contaminants.

The company calls for drilling a well and using up to 50,000 gallons of water per day. Where does that come from, how does that affect local wells, how quickly does the aquifer recharge, and where does the water go once it has been used and with what in it? The town has no comprehensive plan to address impacts on groundwater. Prospect does have a shoreland zoning ordinance with a 250-foot setback, but the company wants to change that. Such a change would require voter approval.

What will happen to wells, property values, and quality of life for the local residents? Prospect is a small town, with not a lot of people to try and stop this project.

And then there are the non-human residents. The western and northwestern borders of Bowden Point are wildlife management areas, protected areas for birds, fish, and other local species. There are the Marsh and Penobscot Rivers. The water, the air, who speaks for these resources? This project has great potential to harm the human and non-human habitats, the water, the air, the quality of life for all beings in this beautiful place.

We probably all have places like Prospect in our hearts. Here is a chance to protect one of those places.

Editor’s Note: You can learn more about this proposed project and see a map in this Bangor Daily News article. Read an excerpt from Gary Lawless’s recent book of poetry here: “A Few Cobbles from HOW THE STONES CAME TO VENICE.” The first poems in the book are about Prospect, Maine – it is the same place – the same granite. 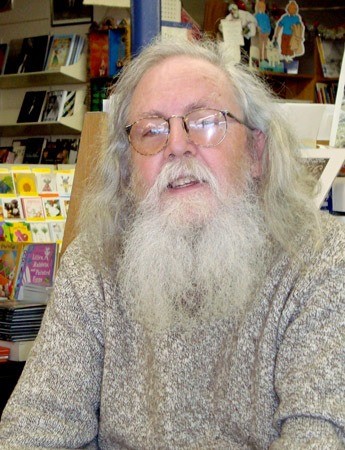 Gary Lawless is a poet, bioregional advocate, and co-founder of Gulf of Maine Books, in Brunswick Maine.

He and his wife Beth Leonard care-take the old farm of Henry Beston & Elizabeth Coatsworth (both acclaimed authors of the mid-20th century), near Damariscotta Lake.

Gary’s score of poetry collections includes Poems for the Wild Earth and Caribou Planet.  His new book of poems is How the Stones Came to Venice, and his poetry blog.