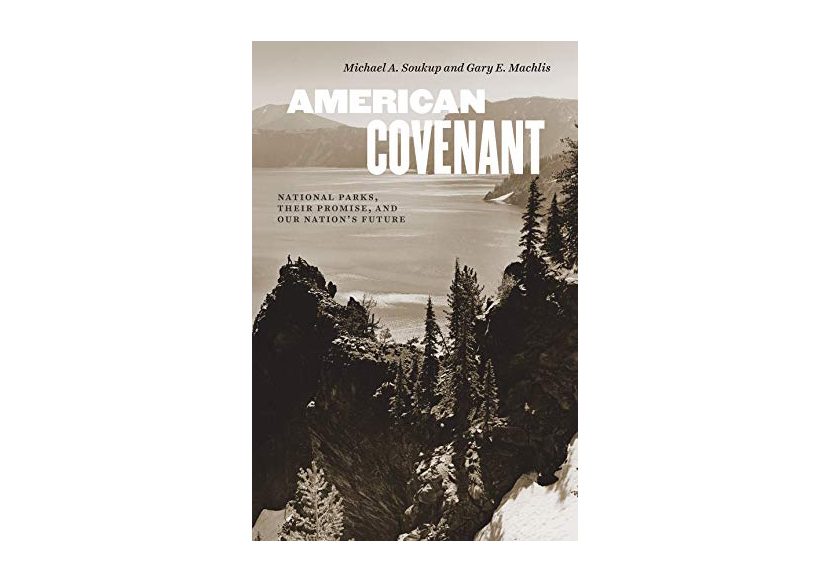 American Covenant: National Parks, Their Promise, and Our Nation’s Future

American Covenant is an ambitious little book by two scientists with long histories and hard-earned insights into America’s national parks and their management. Mike Soukup, a marine ecologist, served as a park researcher and regional office scientist, and ultimately rose to be the Park Service chief scientist – his official title was associate director, Natural Resource Stewardship and Science. Gary Machlis is a social scientist whose lifetime of research and teaching focused on national parks. He served as “visiting social scientist for the National Park Service” and as he notes “(the ‘visiting’ in the title reflecting both Gary’s and the agency’s tentativeness about the idea.)” During the Obama administration he was science adviser to the NPS director, then returned to teaching at Clemson University. These two national park veterans shared lots of experience over decades on the national park scene and join in American Covenant to offer their insights, critiques, and recommendations about what America’s national parks are, should be, and might become.

Soukup and Machlis draw several conclusions from their long experience. First, in creating a National Park System, Congress “created a system of uniquely American covenants,” binding agreements “between different elements of American society.” These covenants provide the opportunity and the obligation to protect and maintain “characteristics of our nation’s heritage.” Second, the National Park System has the potential to honor these covenants, but for several reasons which they describe is failing to do so today. Third, essential to doing so in these times is to have park policy and management guided by science, which the National Park Service throughout its history has been unable and even unwilling to do. Fourth, the challenges of managing national parks to honor the ecological, social, and political covenants involved are becoming ever more complex as the American population and economy expand. Fifth, because of this growing complexity, “The days when it sufficed to provide comfortable visitor services and have worthy generalist rangers watch over resources are gone.” Lastly, the National Park System is not what it should be in terms of its scope.

We have seen that the current system has grown without a consistent vision, plan, or systematic identification of sites necessary to become representative, resilient, and redundant. A representative system requires something of everything of value. Resilience requires adequate size of land parcels and their healthy condition. And redundancy requires that we preserve more than one example of each type of ecosystem.

American Covenant is a critique of the status quo but offers hope and suggests ways that the National Park Service, Congress, and the American people can make course corrections in vision, policy, and practice to achieve and honor the covenants they established well over a century ago.

After introducing themselves and presenting an overview of their “sense” of what national parks have been, are, and should be, Soukup and Machlis summarize the National Park Service as they see it today.

The overall result [of NPS history] is an agency with hardworking, dedicated employees, well-meaning managers, and a “small-family” feel. Yet few are trained to think about or cope with the innate difficulty of saving complex natural systems in human-dominated landscapes, and too little time is spent preparing the service for the challenges of the future. In many ways the agency feels like a comfortable small family on a picnic that hasn’t prepared for the storm clouds gathering on the horizon.

Much of the rest of the book is dedicated to explaining what the storm clouds are, using examples from their experience, and their thoughts on what preparation for the storm might involve. Soukup and Machlis don’t hesitate to constructively critique the Park Service, hoping to provoke it along with leaders at all levels of government, politicians, NGOs, scientists, students and, most importantly, citizens “with a better knowledge of why parks matter” so they will act “to keep this remarkable covenant among and between generations strong and unimpaired.”

They offer a list of twenty ways that national parks serve the nation ranging from services to visitors seeking recreation (which they think has been too much emphasized in park management), to reservoirs of biological diversity (too little emphasized), as “living dioramas” of untrammeled nature, laboratories, economic drivers, and as a “public commons,” among others. They write, “Mastery of the full range of potential roles for national parks is dependent on how well they are both managed and protected.” This seems obviously the case, and what they are calling for is such mastery. What do they think is needed to achieve it?

Readers informed about national park history will realize that these ideas, and others offered by Soukup and Machlis, are not new – some have come and gone more than once in that history. Those informed of the myriad threats to national parks today will also respond with “Of course, this is common sense.” But they will also know that achieving most, or even any, of these urgent measures, is politically difficult, and beyond the power of the National Park Service to implement most of them. Doing so will require support from the public that translates into political support for the National Park System and its managers, as the authors say repeatedly. The public support seems to be there but, as the authors admit, the NPS is a small agency, its mission on the periphery of national priorities on which most politicians are focused, and its lobby minuscule as compared to many other agencies and issues. They offer some ideas on how to address this but admit it is a big hill to climb.

American Covenant needs to be a much bigger book, the ideas presented and rationales for them developed more extensively. The framing of the National Park System as a covenant adds power to advocacy for the idea and the physical reality of “national park.” A park like the Everglades, the situation of which provides for the authors a powerful example of the complex nature of protecting a natural area today, is not just land and water and birds and alligators but a symbol of what is being lost and what could be protected and even restored. It is a powerful example of the “shifting baseline” wherein people today have no idea of what the “river of grass” once was and what it could be again, cannot experience the earth there in its fullest expression, but must simply accept what they know as how it must be. The idea of protecting a covenant is bigger than protecting a physical place, and it casts the mission and responsibility of national park stewardship in a powerful light. The authors write, “In few world arenas can so much be gained for so little as in protected-area establishment and prudent management. It is the intergenerational covenant for protecting a representation of the natural world we inherited that can lead the way in maintaining natural diversity and health of the planet.”

Of course, the “general public” today does not usually read big books, their attention drawn off in a multitude of directions, so less is more when authors seek to reach a large audience with a call to action. Machlis teamed with President Obama’s NPS director, John Jarvis, in a similarly small but important book chock full of big ideas, The Future of Conservation in America: A Chart for Rough Waters (2018). Soukup, Machlis, and Jarvis are looking ahead, trying to wake up the public to the fact that “Each of our great national parks is irreplaceable.” And while the “National Park Service is a fine agency asked to do great and difficult things … We must avoid retooling the National Park Service without adding enhanced professionalism as its core. If it remains too tightly bound to the memories of its early success and its comfortable tradition of simple approaches to complex problems, the National Park Service will fail. New leaders with new skills, backed by informed visitors, powerful partnerships, neighboring communities, and the public at large are the best combination for future success.” This is strong stuff, no shrinking violets these two veterans of many park battles.

Soukup and Machlis finish on a note of cautious optimism.

Our journey has taught us that the stakes for our national parks are much higher than most realize and that so much more should be expected from our National Park System. It has led us to believe that the golden age of national parks is yet to come. But it will not come if left to the old National Park Service. It will not come from Congress and the White House unless they hear the message of the covenant from the American public.

They toss us a challenge here – the System and the Service need our help. They are not blaming their colleagues for not stepping up to the challenges they describe. Rather, they are issuing a challenge to those colleagues and to all Americans who profess to love the national parks to get to work to bring change, to demand it. In a nation divided by many things, there seems to be unity in support of the national parks. It’s time, they say, to build on that fragment of unity before the opportunities to protect and grow the System and honor the covenant are gone. This may be a small book, but it is an important one, and it is essential reading for anyone concerned about the future of America’s national parks.

Get your own copy of American Covenant: National Parks, Their Promise, and Our Nation’s Future.