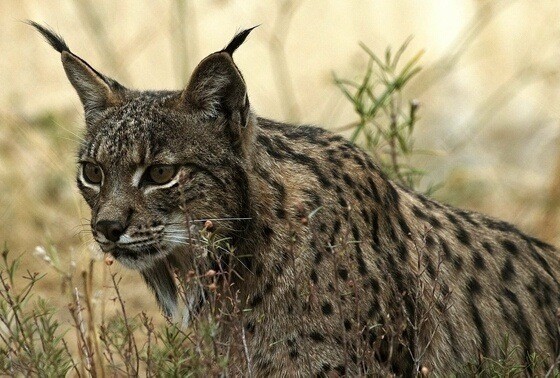 Cougars at Wolverine Project and Good News for the Iberian Lynx

The Alberta Conservation Association is undertaking a field study on the wolverine in the Rocky Mountains of Alberta. Their cameras picked up some unexpected wildlife action. 24 hours, 3 very determined cats, 4,590 photographs make for one very cool cougar video!

The photographs, captured by a camera trap in Vila Nova de Milfontes on Portugal’s west coast, came as a surprise as these animals have not been seen in the area for decades.

In an exemplary case of inter-agency cooperation, the hunting association that took the pictures passed these straight to the Portuguese environmental protection authorities and ICNF who immediately set out to learn more.

Eighteen days later, the lynx was photographed again – this time in daylight – and was identified as a two year old male known as Hongo, originally from Doñana National Park in Andalucía.

This is the latest in a string of good news for the Iberian lynx – the world’s rarest cat species – whose numbers have fallen by over 90%. Its decline is largely as a result of habitat loss and a severe reduction in rabbit numbers (its main prey) due to disease, although deaths from hunting, accidental trapping and road collisions have also contributed to falling numbers.

In 2003, Fauna & Flora International (FFI) and Portuguese partner Liga Para a Protecção Da Natureza (LPN) began work to secure a landscape corridor for the Iberian lynx, with help from the Halcyon Land & Sea fund. This project has successfully negotiated land management agreements for over 18,500 hectares, which are being managed for the recovery of lynx habitat and prey (rabbits).

In 2010, the team was rewarded with news of the first verified record of a lynx in Portugal for nearly a decade, which was tracked using a radio collar in the region where the project operates.

This latest sighting follows news of a record-breaking season at the Iberian lynx breeding centre, and offers yet more evidence that conditions for the lynx may be improving.

“Since work began, we’ve hoped that the lynx might one day repopulate the eastern side of Portugal which borders the Sierra Morena mountains and links well to known breeding populations in Spain, so the news that a lynx has been spotted all the way across the country has both surprised and delighted those working to conserve these animals,” said Paul Hotham, Regional Director of FFI’s Eurasia program.

“This signals several positive developments for the Iberian lynx,” he continued. “Firstly, it shows that habitat conditions, with some persistence on the part of the lynx, may be sufficient to enable other animals to move into Portugal from Spain. Secondly, the level of awareness and understanding of the lynx’s situation that now exists in Portugal enabled effective cooperation between local hunters – who reported the sighting – and the conservation sector. The sighting is hugely significant for Portuguese conservation.

“What’s more, the discovery of a lynx this deep into Portuguese territory, and the fact that they managed to photograph it, offers a huge morale boost to all those who have been working so hard to conserve these beautiful cats,” he added.