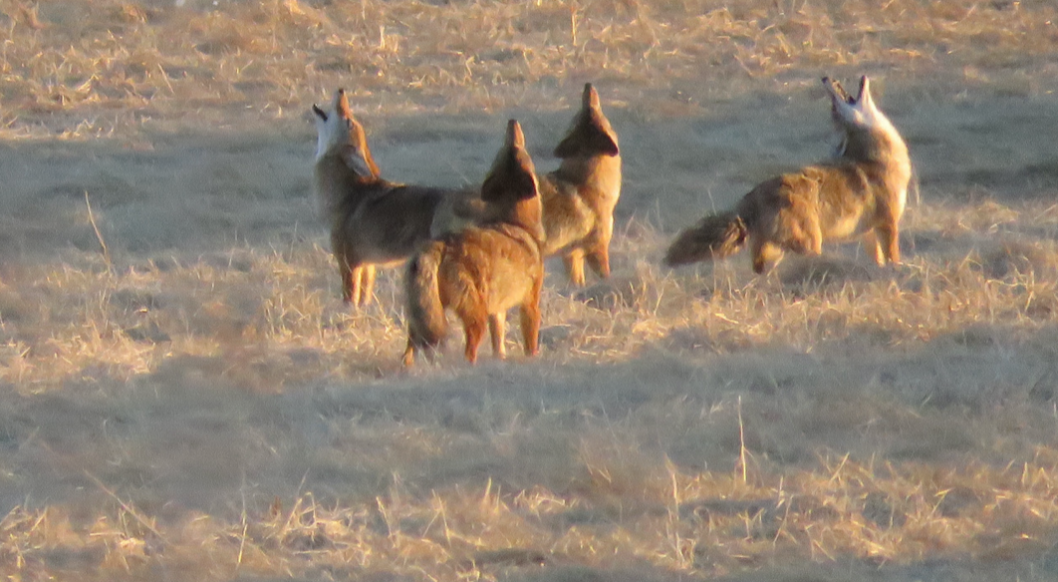 I had an incredible coyote interaction early this morning while camping in southern Colorado.  I decided to take my morning walk along the edge of a big meadow near the river. We were camped on the north end of the meadow.  I found an easy route to get down to the river and found some fresh deer tracks.  When I climbed back up over the low bench to the meadow a coyote was standing broadside about 30 yards out.  Incredibly, he did not see me, so I froze (standing straight up in plain sight with the sun shining on me) to see what he would do.  He lay down in the grass for a nap!  I sneaked over to a large downed log to sit on and just watched the spot where he was resting.  Shortly, he got up, stretched a bit, but was staying in that general area.  When I thought he was looking away from me, I slowly raised my binoculars, but he caught the motion and looked directly at me.  I froze with my binoculars up, and he stared at me for what seemed like several minutes, but clearly hadn’t figured out what I was.  He started barking loudly and kept barking for a long time, staring at me all the while.  Then he started interspersing howling with the barking.  All his continuous barking and howling lasted a very long time.  And every bark and howl echoed off of the sheer face of a mountain peak, which was directly behind me.  This added an eerie quality to his vocalizations.  My wife was hearing it all from the trailer, and we both estimated the barking and howling lasted at least 15 minutes!  When he finally stopped howling, the female (I’m making assumptions here as to gender—she was smaller and lighter colored) came in to greet him.  Both animals were gorgeous!  Shortly after the greeting, they began to move in my direction.  About 30 feet from me they split, and the female whet down onto the river floodplain, but the male turned my way and began walking straight toward me.  He came within about 15 feet or less, and I thought if I remained completely still, I might get sniffed by a wild coyote.  But he turned and walked a 15-foot arc around to the other (south) side of me, then turned around and retraced the arc back to the north side.  I was having a good adrenaline rush at this point and contemplating what I would do if he approached within 5 feet of me.  But that didn’t happen.  He trotted off in the direction the female went, and the encounter was over.  He never figured out what I was, but he was very curious about that strange bump on a log that I’m sure he was quite familiar with in his home territory.  The whole thing must have lasted more than 30 minutes.  This was the most fascinating and closest encounter with a wild canine of my life! 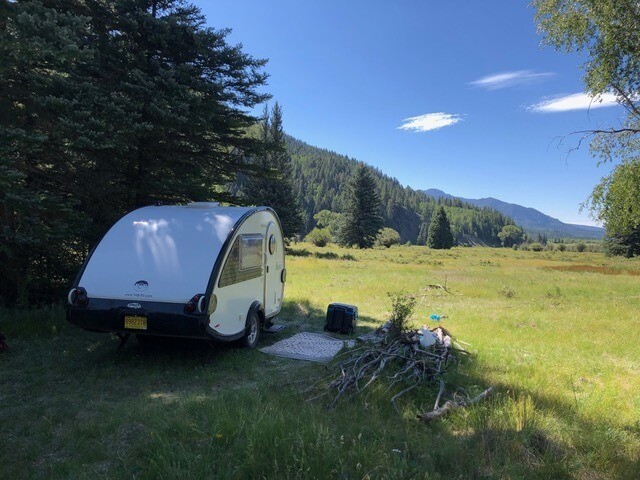 Spectacular encounter. Magnificent exchange.
So, I’m curious. What did you decide you would do if he approached within 5 feet of you?
I am incredibly impressed that you remained quiet. My reaction would have been to whisper comforting words to him (to me, perhaps).
Well done.

That’s amazing, as coyotes in both Mexico and the US tend to bolt upon smelling or otherwise detecting a human, in my experience.
In a favorite wild area of Mexico, walking one morning I spotted a coyote pair heading my way down an arroyo. Going still, hopinng I would be mistaken for a mere tanned Cardon cactus, they approached , looking down for cooled-off reptiles ro the many rodent species, they did come within 10 meters, before my personal coyote perfume warded them suddenlly, the female taking cue fromm the male to bolt back up the little valley.
Another time, in CA’s desert mountain streams, the captive-born wolf with whom I lived and helped to live in his natural way, strode down a canyon with vertical walls below us (as it was getting light, the desert heat would be too much for a 130lb. wolf, so we were night creatures in most seasons (wolves of his descent appear to be most happy when temps are below 45F – all the way down to blizzards that can make their resting appear as snow humps- he always shunned the tent in storms).
As it was May, we were suddenly greeted by a chorus of coyote pups, withi 40 feet, safe and hidden in den across the stone-walled stream. I began answeerrinng them, barking, yipping and howling up into the whistle range where their voices leave our hearing range (We know that human hearing maxes out at around 20Kh, the quizzical wolf – who was adept at chasing coyotes infringing on his moveable feast of land- hears into the 40Kh range, but coyotes have responded to up to 80 Kh, so their song , like a super-soprano, modulates right through the highest whistles we can hear).
Yes, quizzical. He first searched for access, but it was a true canyon, so he just lay in the increasing light, looking at me. He didn’t join, as was common to him when hearing howls.
For about 15 interminable minutes the pups and I had telling conversation, until suddenly they stopped in unison. I could only figure that the parents had come down their side arroyo, which was densely thicketed up to the ridges.
Properly instructing the kids to be silent to their two most dangerously exclusionary coinhabitants, I was a bit sad, that it must be so. So we Sayonaraed on into the down.
Just think, though, how the gabbling and extended greetings you might have treasured, more indicative of coming light than the vagaries of insomniac roosters in all North America’s Southwest from seashore to the high and dry forests were the natural alarm clock, so more pleasant than any other song to countless generations of theirs and ours.

Born where and when the last wolves NW of Superior sang, and introducing many curious humans to the young and eager, then full regal Ambassador – from busload of excited Chinese with whom he patiently deigned to be photographed following weeks in his wild land, to resting hip to hip listening to indigenous drummers afar, or seeing initially zealous conspecifics rush like water over hill & dale to meet him, only pulling up when they detected my pungent primate person, I miss this, and these, fireballs of fur.

Increasing weapons and delusions of misapprehension and fear are taken up by my own blunted kind.
This fall will be a cusp, a point where the future of the wolf’s world will again be arrogated by a timorous and gluttonous omnivorous ape, one so self-absorbed that it cannot perceive the real.

I’ve given careful way to bison grunt and griz clack and drool, mostly recognizing their vulnerability, their diminution at our hands.
Ours will come should we follow or allow the crazed anxiety of the panic-prone gun-clutchers who disguise their faint hearts by executing from safe distance, all that lives.

Or, one day, the Songs of Earth will not have to be silenced in our presence and we can walk again, enriched beyond all the songs of ours, as we did for countless hundreds of thousands of years.

Perhaps he was trying to decide whether to mark you for his territory? Congratulations on a great encounter, and thanks for not killing him and stringing him up on a fence like I’ve seen before.

In response to Jo. I had not fully decided what to do. I likely would have flicked a hand or foot, which probably would have caused him to flee. I would not have yelled “BOO!” – that would seem to be cruel given the peaceful nature of the encounter.