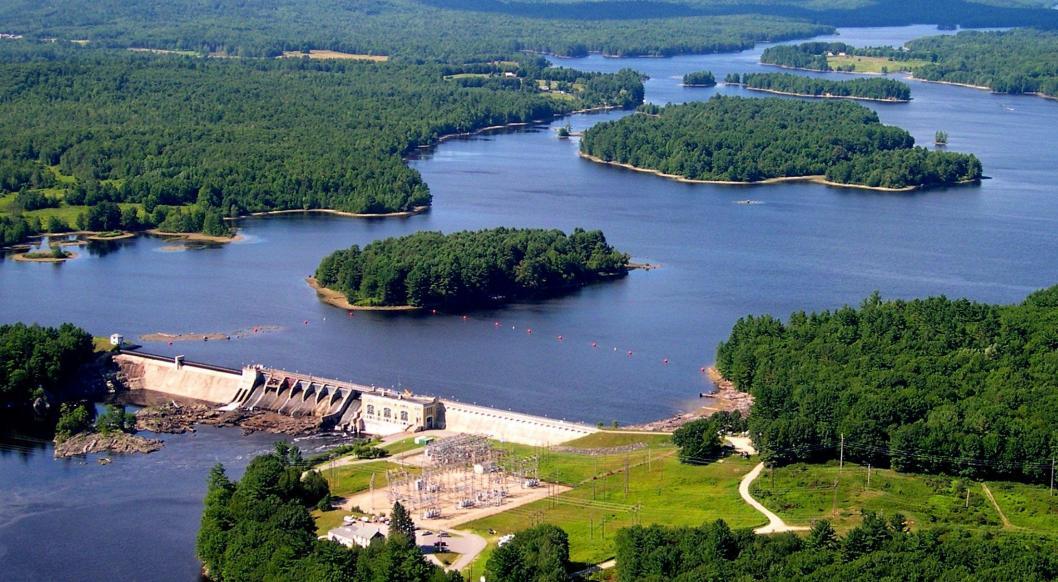 Friends of Merrymeeting Bay (FOMB) is a membership nonprofit grassroots organization in mid-coastal Maine using research, advocacy, education and land conservation to protect, preserve and enhance the unique ecosystems of Merrymeeting Bay and Gulf of Maine. The mission of Friends of Sebago Lake (FOSL) is to promote an understanding of the interconnected harmful impacts of unnatural freshwater flows by dam regulation and to advocate for the restoration of natural freshwater seasonal water flows from inland waters to the seas.

Merrymeeting Bay, technically considered an estuary, is more accurately both freshwater tidal riverine and geologically an inland delta. Located at the junction of six rivers, Merrymeeting Bay drains nearly 40% of Maine’s water and some from New Hampshire. It is the largest staging area for migratory waterfowl north of Chesapeake, the second hottest spot in Maine for a recovering bald eagle population; the only Maine water body providing spawning and nursery habitat to all twelve diadromous fish species in the Gulf of Maine, some of which are endangered or threatened; and host to about a dozen rare inter-tidal plants, some of which are globally rare. From its inland location north of Brunswick, the Bay drains through a 200 meter bedrock slot (The Chops) about 17 miles via the Kennebec River to the Atlantic at Popham Beach.

FOMB publishes a quarterly newsletter. The Altered Flows article below by FOMB Chair Ed Friedman and Friends of Sebago Lake activist Steve Kasprzak appeared in their Winter 2019 edition and is reprinted with permission.

Each time I hear Hydro Quebec mentioned as synonymous with green energy I cringe all the way from my head to my toes. Not only did the damming of most large rivers in northern Quebec destroy the native Cree culture, drive wildlife populations that could escape rising waters into limited areas of high ground, and destroy the free flowing rivers with their migratory fish populations; we’ve come to learn there are a myriad of other seriously adverse effects. There is extensive but generally older research on the effects of altered freshwater flows. Locally, our partners at Friends of Sebago Lake have become quite interested in the subject and hope to compile a central online repository for this research. A number of published papers on the subject, particularly dealing with vital nutrient transfers can be found in the research section of their website. What follows will give you a better idea of true energy costs coming through the recent Central Maine Power’s Maine Power Reliability Project high voltage transmission corridor and what is planned for the now fiercely contested proposed CMP corridor through Maine to southern New England. And, an idea of what effects Maine’s dammed rivers may be having in addition to physically blocking fish.

This first excerpt is from: After a Long Boom, an Uncertain Future for Big Dam Projects, written by Jacques Leslie and published November 27, 2018 in YaleEnvironment360 from the Yale School of Forestry & Environmental Studies

The environmental costs of dams have been well documented. They devastate fisheries by blocking fish migration and the downstream flow of nutrients to estuaries, and they upset river hydrological regimes that plants, animals — and humans — depend on. They are often touted as generators of clean energy, but even that assertion is being undermined by increasing evidence of substantial methane emissions from reservoirs.

The International Hydropower Association touts dams as a clean technology, but that’s not quite true: Many reservoirs emit substantial amounts of methane, a potent greenhouse gas released by decomposing vegetation and other organic matter that collect in oxygen-poor reservoirs. A 2016 study in BioScience found that methane emissions from reservoirs constitute 1.3 percent all of global human-caused greenhouse gas emissions, and the highest-emitting reservoirs rival coal-fired power plants?. It is commonly assumed that methane emissions occur chiefly in shallow, tropical reservoirs, as if it’s a problem for only a small number of dam projects. But according to John Harrison, a professor at Washington State University’s School of the Environment and one of the study’s authors, “There is strong and growing evidence? that temperate reservoirs can produce methane at rates comparable to those reported from tropical reservoirs.”

And from Steve Kasprzak, in a special to the Maine Sunday Telegram on December 23, 2018:

Before advocating for the 145-mile line to carry hydroelectricity generated by Hydro-Quebec (Our View, Dec. 9), the Maine Sunday Telegram Editorial Board should first explain why hydroelectricity produced by reservoir dams should be called “green energy.” The construction of these dams in Maine would be prohibited by Section 401 of the Clean Water Act of 1972 and Maine’s Natural Resources Protection Act.

Every reservoir hydroelectric facility represents an environmental catastrophe, not only to the dammed river, but also to the ocean regions where the rivers’ currents convey nutrients.

Commissioned in 1969, the Outardes-4 hydroelectric reservoir dam on the Outardes River discharges into the St. Lawrence River. Its surface area is 252 square miles – five times bigger than Sebago Lake.

Four other hydroelectric facilities, built from 1967 to 1989 on the nearby Manicouagan River, also discharge into the St. Lawrence. The Manicouagan Reservoir (utilizing a 5km asteroid impact crater from 215.5 million years ago and now 100km across and a tourist attraction known as “The Eye of Quebec”–EF) is a giant head pond created by the Daniel-Johnson Dam and has a surface area of 750 square miles – equivalent to 16 Sebago Lakes. 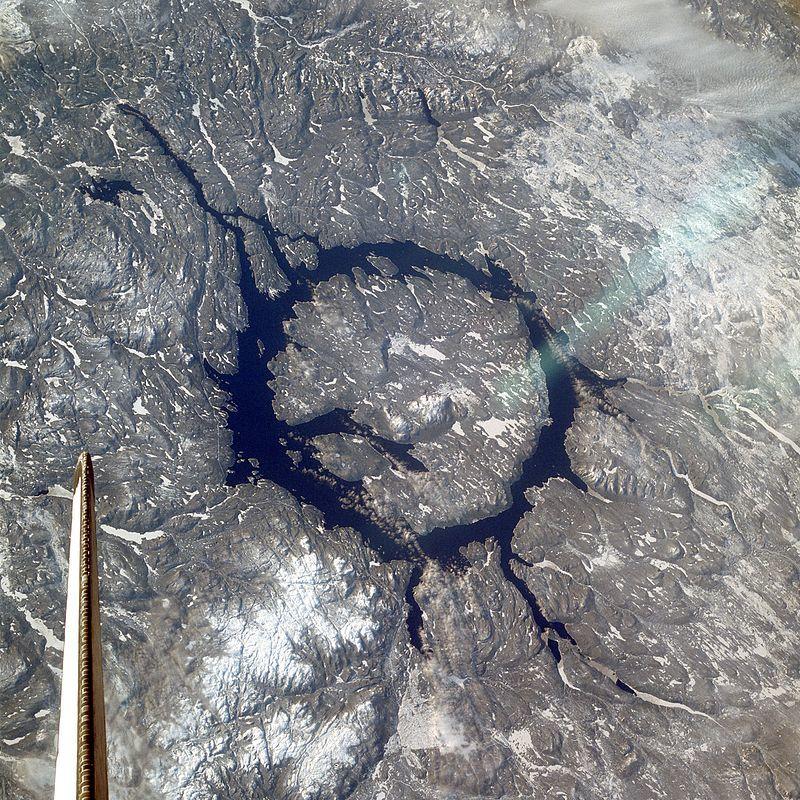 There are four other reservoirs on the Manicouagan River, and the Mavic-Outardes hydro project has an annual capacity of 5,579 megawatts. Maine’s total annual hydroelectric capacity is 753 MW.

The St. Lawrence, the largest-volume river (inclusive of the Great Lakes which it drains–EF) in North America, is the major supplier of dissolved silicate to the Gulf of Maine, as daily flows are 40 to 50 times greater than any of Maine’s major rivers.

The Churchill Falls Generating Station was built in the 1970s in Newfoundland-Labrador on the Churchill River, which discharges in the Labrador Current.

There are 11 generating units and a series of 88 dikes, which have a total length of 40 miles and created the Smallwood Reservoir with a surface area of 2,200 square miles – equal to 46 Sebago Lakes. The annual capacity is 5,428 MW.

The Robert-Bourassa hydroelectric project was completed in 1986 in Quebec on the LaGrande River, which discharges into James Bay. It has an annual capacity of 10,800 MW and five reservoirs with a surface area equal to 89 Sebago Lakes.

A second phase of hydroelectric dams was built on the LaGrande River in the 1990s with an annual capacity of 5,200 MW. The surface area of these three additional reservoirs equals 13 Sebago Lakes.

The surface areas of the above reservoirs, built on just four rivers, are equal to 169 Sebago Lakes or 982 transmission corridors 145 miles long by 300 feet wide.

Before these dams were built, the silica cycle was in a steady state with input balancing off the output. The major output loss is in the ocean waters, where it is estimated that the burial rate of biogenic silica is 2 to 3 percent per year. A cumulative loss of 3 percent per year would result in a 50 percent loss of silica in only 23 years.

The cumulative impact of less silica being transported each year to the ocean has resulted in fewer and smaller diatoms. (Silica forms the cell walls of diatoms, key single organisms at the base of the marine food chain.–EF) Depleted diatom populations fail to support a healthy food chain or ameliorate ocean acidity, and they’ll release less oxygen into the atmosphere. This has led to the starvation of creatures and fishes that eat them and increased acidity. The silicate of the smaller diatoms dissolves before the carbon can be sequestered to the ocean floor. 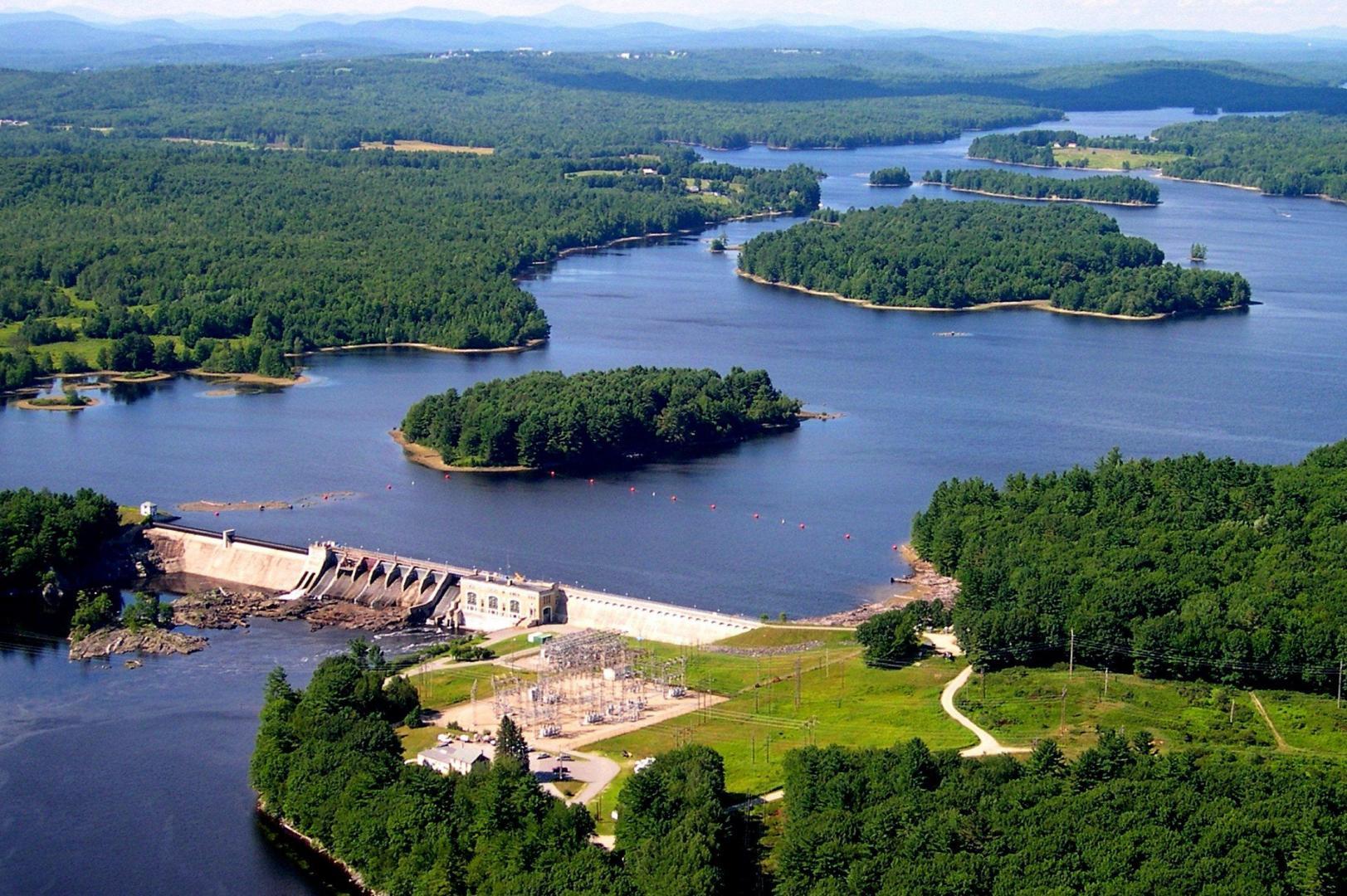 These reservoir dams have had other catastrophic impacts. For example, the temperature of the high-volume winter discharged waters flowing into the ocean has increased. These reservoir waters are now thermally stratified lakes (often with low levels of dissolved oxygen creating relatively lifeless anoxic environments–EF). In northern temperate lakes, the bottommost waters are typically close to 4 degrees Celsius year-round, which is much warmer than the super cold river waters flowing under ice in the winter. It is not surprising the Gulf of Maine is warming so fast.

Founded in 1975, Friends of Merrymeeting Bay (FOMB) takes a holistic approach to protecting the Bay, combining research, education, advocacy, and land conservation. Our mission is to preserve, protect, and improve the unique ecosystems of Merrymeeting Bay. Learn more friendsofmerrymeetingbay.org