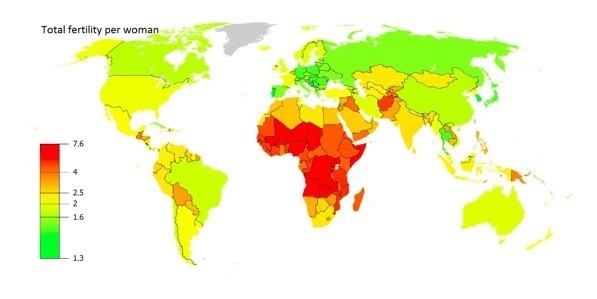 At the risk of seeming overly optimistic, I would like to make a list of good things that are happening in the world of family planning and demography.

My perception is that people are starting to realize the advantages of having small families. Their motivation is two-fold. Many people are realizing that it is possible to be married and have a good life with just one child, or with no children at all. In the USA and in many other rich countries this is practical because we have old age benefits, but more difficult where these benefits don’t exist so people have to rely on their children. There is another, altruistic reason a few are limiting their fertility. They see that the world is already overpopulated and don’t want to contribute further to the problems we are causing.

There are better, safer, and more effective contraceptive methods than 52 years ago when Gail and I got married. The number of women using highly effective methods is rising, and (thanks to some good people running altruistic organizations) some are more affordable. An example is Medicines 360 which makes the Liletta™ IUD available to nonprofit clinics for just $50.
Colorado was chosen several years ago for a 5 year experiment. Women were able to receive LARCs (Long Acting Reversible Contraceptives, such as IUDs and implants) at no cost, even if they didn’t have insurance. The result was phenomenal—the unplanned pregnancy rate in our state dropped dramatically, and so did the abortion rate. I like to think of all the young people who were able to finish high school and go on to college because of this experiment. That experiment is over, but funding has continued thanks to private and state funding.

Emergency Contraceptive pills are now available without a prescription. This medication is so safe that there are essentially no cases of serious harm from taking it. It is not the best solution, because it is used after a failure—failure of a man to respect a woman, failure of a couple to use contraception, or failure of a condom. Nevertheless, EC pills have prevented thousands of unplanned pregnancies.

There is also a movement to make birth control pills available without prescription at Free the Pill, or with a prescription from a pharmacist. Now a woman can purchase “the pill” over the internet, and in some states (including Colorado and New Mexico) pharmacists can prescribe hormonal contraceptives by following a protocol. Planned Parenthood has been doing something similar for years. A woman can purchase pills there, if all is ok, after answering a health questionnaire and having her blood pressure checked.

Although the need for abortion is decreasing, there are still all-too-many unplanned pregnancies. Access to abortion services is being curtailed in many parts of this country, causing women to have unsafe abortions. This is similar to what happened before Roe v. Wade in the USA, and is common in countries where abortion is illegal. The good news is that mifepristone and misoprostol, the pills used for a medical abortion, are available over the internet.

There are problems with internet-aided abortions. Most of these pills come from India, are expensive, some are of low quality, and they can take weeks to arrive. Unfortunately, medical care by internet has some inherent issues that will be difficult to resolve. It lacks the personal support that is so important when making an important decision. Also, there are two possible complications. Unless a woman has an ultrasound she might not know that the pregnancy is ectopic. These medications won’t cure a tubal pregnancy, which can rupture and cause serious internal bleeding. And the medications aren’t always effective in ending a pregnancy, so follow-up pregnancy tests are important.

Many countries now have Total Fertility Rates (TFRs) below the replacement rate—the number of children needed to replace the two parents. Replacement rate is slightly more than 2 because some kids die before they reach the age of parenting. This means that the countries’ populations will eventually decrease. Don’t be fooled, however—with few exceptions, all countries have increasing populations due to population momentum and increasing longevity. Of the CIA’s list of countries, only 105 have a TFR above 2.1, and 119 are less. The average TFR for the world is 2.4. We are getting closer to slowing population growth, but still adding about 80 million people to the already overcrowded planet each year.

P.S. The global map of TFRs shows that most of the high TFR countries are in Africa. Please remember that these countries have low consumption, so a large family there has much less effect than a country with small families but very high consumption, such as the USA.

Dr. Richard Grossman has been concerned about human overpopulation growth since 1960, and practiced OB-GYN in Durango, CO, for 40 years.

Dr. Grossman writes a monthly column “Population Matters!” for the Durango Herald. If you would like to receive these regularly, you can contact him at: subscribe@population-matters.org