By Jack Humphrey on March 9th, 2018 in Healing Nature's Wounds 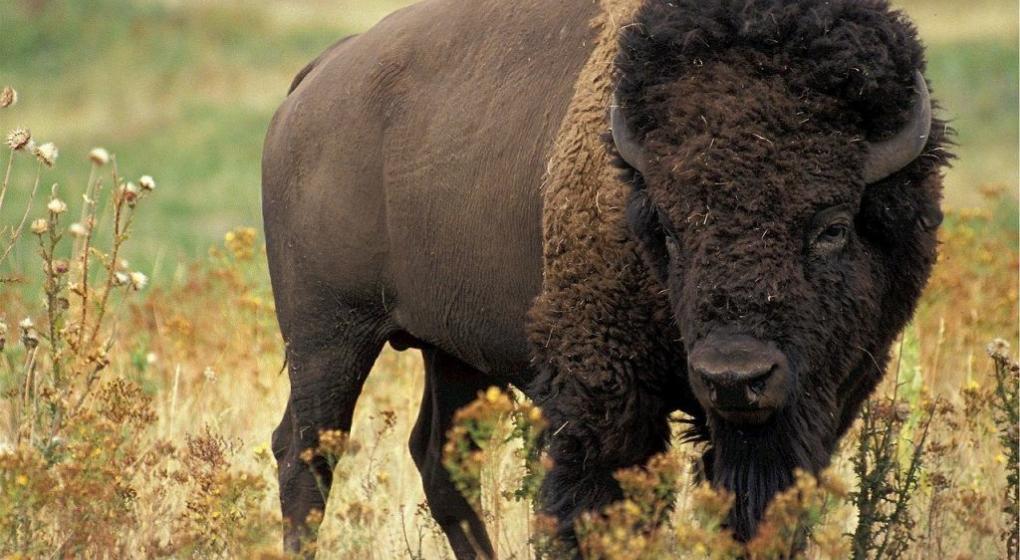 Yellowstone National Park – This morning, a press release issued on Facebook by an emerging group, Wild Buffalo Defense, revealed that two members of Wild Buffalo Defense locked down inside Yellowstone National Park’s highly controversial Stephens Creek buffalo trap. The individuals secured themselves to “The Silencer,” the squeeze chute that holds wild buffalo for testing and other invasive procedures, before they are shipped off to slaughter facilities.

This winter, Yellowstone National Park has captured more than 500 wild buffalo inside this facility, though in the past two decades, thousands of the gentle giants — a sacred, keystone species who is our national mammal — have met their end after being captured at Stephens Creek and moved through this facility. All captured buffalo are destined for slaughter or domestication and commercialization in an effort to appease Montana’s cattle interests. The Yellowstone buffalo herds are the last continuously wild, migratory buffalo remaining in the nation. There is vast public support in Montana, the U.S., and around the globe for these buffalo to live wild and free on their ancestral lands.

Wild Buffalo Defense’s press release reports that the two individuals who locked down to the trap have been identified as Cody Cyson, an Ojibwa man, and Thomas Brown, a former Buffalo Field Campaign volunteer. After hours stalling Yellowstone’s capture and slaughter operations, Cyson and Brown were arrested. They have an arraignment date set for Wednesday morning, at Yellowstone’s headquarters, in Mammoth, Wyoming.

“We applaud these courageous souls for sacrificing their freedom to free wild buffalo and to draw more attention to this atrocious trap,” said BFC media coordinator Stephany Seay. “This action should send another strong message to Yellowstone National Park that there are many people who strongly oppose the current mismanagement of this American icon,” said Seay. “The Stephens Creek buffalo trap stands as a monument to oppression and control over beings who were born to roam free. They are the embodiment of wildness and freedom, and these qualities are precisely the reason they were chosen to represent this nation, supposedly the land of the free.”

The two herds who make up the Yellowstone buffalo population are the last wild buffalo to have continuously existed on the land since before European settlers arrived. These buffalo are the direct descendants of the 23 individual buffalo who saved their kind from extinction by seeking shelter in what is now Yellowstone’s Pelican Valley. The ancestors of the buffalo who survive today escaped the extermination campaign that the U.S. Government implemented during the 19th Century, in an attempt to starve the Plains peoples. Yellowstone’s senseless buffalo slaughter is considered by indigenous buffalo cultures and bison advocates at large as a continuation of genocide. During the time the two men were locked down at the trap, others gathered at the gate to the Stephens Creek facility holding a banner that reads, “Buffalo Slaughter = Cultural Genocide.”

When asked why he was taking this action, risking his own freedom and possible injury, Cody Cyson said, “I am standing with the Plains Indians as a member of the Ojibwa tribe in Minnesota. I have a Blackfeet friend who helped me protect my territory from the Line 3 Pipeline, and now I am here for him and the buffalo. I have a love for the people. That’s what my mom passed down to me. And I have love for the environment and animals and I feel like I have an obligation to protect them. If I have to put my body on the line to do so, I will.”

All buffalo captured at Stephens Creek are destined for direct shipments to slaughter, or confinement, slaughter and domestication through an as yet unapproved quarantine plan. Yellowstone, Montana, and other government officials distort the reality of capture for slaughter or quarantine, claiming it is necessary in order to appease Montana’s intolerance for the native grazers.

In a press release dated February 22, Yellowstone’s Superintendent Dan Wenk stated that targeting the Stephens Creek trap to release imprisoned buffalo was a “setback for bison conservation,” and suggested that quarantine is a “beneficial” tool to restoring bison onto tribal lands. However, there is already evidence that wild buffalo have been exploited and commercialized through the quarantine process, and under Yellowstone’s proposed 50-year quarantine plan, it is likely to happen again. In fact, the first quarantined bison were transferred to Ted Turner who has been managing them – according to www.turnerbisonexchange.com – for “optimum economic production” and selling them at auction at prices of $11,000-$42,500. This underscores the fact that quarantined buffalo could end up in the hands of a private, for profit entity, not just tribes.

Buffalo Field Campaign’s petition (PDF) to list the Yellowstone bison under the Endangered Species Act, and our report requesting that the U.S. Forest Service list bison as a Species of Conservation Concern (PDF) on national forest lands, clearly show that both capture for slaughter and quarantine are a serious detriment to this last wild population, and also harmfully intrudes upon the numerous Tribes who hold treaty rights in the Greater Yellowstone.

Wild Buffalo Defense’s press release shared words from the other individual who put his own life at risk, “They say they need to kill the [buffalo] to stop the spread of brucellosis, but the wild elk have brucellosis, and they’re allowed to roam free because the cattle industry is not worried about elk competing for grass and the state receives income from the elk hunting permits,” said Thom Brown, a former volunteer with Buffalo Field Campaign.

Yellowstone National Park claims that they are forced to undertake current bison management schemes by court order. However, as signatories to the Interagency Bison Management Plan, Yellowstone or any agency, can issue a 30-day written notice (PDF) to terminate the already expired Plan. Buffalo Field Campaign has submitted an alternative plan (PDF) to Montana and Yellowstone that respects wild bison like wild elk in Montana. Yellowstone also claims that they engage in such highly controversial management tactics due to Montana’s intolerance for wild buffalo, a statement which is grossly misleading.

“Montanans at large, the majority in this vast state, have repeatedly expressed their desire for wild, migratory buffalo on the landscape,” said Mike Mease, cofounder of Buffalo Field Campaign. “It is only the small but vocal minority of Montana’s livestock industry who Yellowstone is sacrificing America’s national mammal for, and it’s time for this war to end.”

Brucellosis is often used as the excuse for Yellowstone and Montana’s extreme and abusive bison management actions, yet there has never been a documented case of wild bison to cattle transmission since the arrival of invasive cattle to this continent. Cattle first introduced brucellosis to North American wildlife populations, and elk in the Greater Yellowstone region have also been exposed, but, more importantly, elk have been blamed numerous times for transmitting the livestock disease back to cattle, without consequence.

“While Buffalo Field Campaign as an organization cannot take these actions, we would like to thank these brave men for taking them at the Stephens Creek capture facility today.” said Ken Cole, BFC’s executive director, “We have shared values, and we are in solidarity with anyone who is working to liberate wild buffalo and protect them from indiscriminate slaughter, quarantine, and domestication.”

West Yellowstone, Montana-based Buffalo Field Campaign is a non-profit public interest organization founded in 1997 to protect the natural habitat of wild migratory buffalo and native wildlife, stop the slaughter of Americas last wild buffalo and advocate for their lasting protection, and work with people of all nations to honor the sacredness of wild bison. BFC runs daily field patrols and monitors buffalo migration and documents all actions made against them. BFC is the only group working in the field, the courts, and policy arena, every day, on behalf of the country’s last wild migratory buffalo, who is also our National Mammal. For more information visit www.BuffaloFieldCampaign.org.