​Man Swarm and the Killing of Wildlife

The population bomb did not fizzle.
It blew up.
It is still blowing up.

Man Swarm is OUR population explosion. 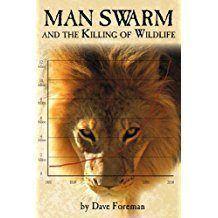 Man Swarm is the main driver behind the biodiversity crisis—the greatest mass extinction since the dinosaurs became extinct, the scalping of hundreds of millions of acres of forest and other key wildlife habitat, and the atmospheric pollution by greenhouse gases leading to “Global Weirding.”

Conservation leader and visionary Dave Foreman shows that only by stabilizing human population worldwide and in the United States can we stop wrecking our home—Earth.  Foreman outlines a sweep of practical steps we can take to bring our numbers down to what Earth can support—if we have the daring, boldness, and love of life to do it.

Order your signed copy below

More than 10 copies should be ordered directly from TRI, payable by check only.

Or make checks payable to The Rewilding Institute and mail to:

Books are signed (unless you don’t want yours signed). Please let us know if you want it personalized and, if so, to whom.

About Man Swarm and the Killing of Wildlife

1 Man’s Population Explosion – Mass extinction and human overpopulation. A historical and numerical look at the population explosion and what it means to Earth.

2 What’s It Truly All About? – Eileen Crist shows how the population-stabilization and limits-to-growth campaign has stumbled because it has not targeted how overpopulation kills other Earthlings.

4 How the Man Swarm Eats Earth – A beginning survey of how our growth is behind the Seven Ecological Wounds, and a call for more, targeted research.

5 Cornucopia Dreaming – A look at cornucopianism and the Idea of Progress. The madness of Julian Simon deconstructed by thinking scientists.

6 Birth Dearth Follies – What is wrong with the thinking of those who fear a “birth dearth” and who call for population growth in those countries that have stabilized their populations.

7 Was Ehrlich Wrong? – Weighing the claims of those who say that Paul Ehrlich and other population “doomsayers” of the 1960s and 1970s have been disproved.

8 A History of Thinking about Man’s Limits – Five ways of seeing the Impact of overpopulation. A survey of thinking about overshooting carrying capacity since Herodotus.

9 The Great Backtrack – The historical, political, and sociological grounds for why conservation­ists and environmentalists have backtracked on overpopulation worldwide and in the United States after 1975.

11 The Bugbear of Immigration – The overwhelm­ing role of immigration behind population growth in the United States and why it is such a thorny devil.

13 What Do We Do? – Straightforward, bold steps we can take to freeze and then lower population through conservation action, personal choices, and political decisions.