Recent books of note related to Rewilding are featured here. This list will be updated regularly, and we welcome your contributions!

In two days, Suggested Reading will move to Notable Publications. 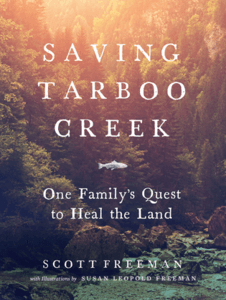 Saving Tarboo Creek: One Family’s Quest to Heal the Land, by Scott Freeman.

Freeman, a University of Washington biologist, and Susan Leopold Freeman (illustrator and Aldo Leopold’s granddaughter) bought a small piece of land in 2004 on Washington’s Olympic Peninsula through which flowed Tarboo Creek, a ditched, diverted, and degraded stream. With family, friends, and others they set out to restore the stream and its surrounding riparian area to benefit salmon and other wildlife. This book is Freeman’s account of what they did, why they did it, and how the project is going. With asides about salmon, forest ecology, the value of beaver and other topics, Saving Tarboo Creek is a hopeful story about what small projects can contribute to the great project of repairing past mistakes. Timber Press, 2018. 224 pages, references, index.

Managing the Wild: Stories of People and Plants and Tropical Forests, by Charles W. Peters.

For thirty-five years, forester and forest ecologist Peters has worked with local people to incorporate their knowledge of tropical forests into policy, planning, and management to achieve conservation goals while meeting and sustaining local people’s needs. In short essays he describes examples from Mexico, Indonesia, China, Peru, and Myanmar among other places, which demonstrate the wisdom and power of bringing modern ecological science together with local and indigenous knowledge to achieve sustainable forest management with all its benefits. He concludes that “the stories here provide a useful counterpoint to the generally bleak and dispiriting reports coming out of the tropics, and suggest that much of what Westerners generally assume about indigenous people and their management of tropical forests is incorrect.” Yale University Press, 2018. 184 pages, photos, maps, notes, index.

The Aliens Among Us: How Invasive Species Are Transforming the Planet – and Ourselves, by Leslie Anthony.

Burmese pythons in the Everglades, lamprey in and Asian Carp threatening to enter the Great Lakes, even pathogens and microbes like the Zika virus, are the aliens of the book’s title invading North America. Science journalist Anthony travels widely visiting researchers and managers in Canada and the United States wrestling with an ever-increasing challenge of managing invaders already successful and stopping others from spreading through ecological communities. This is a primer in what he calls invasion science, describing with insight and even humor the rapidly growing problems this applied ecological science is trying to address. Anthony shines a bright and readable spotlight on a serious threat to biodiversity everywhere. Yale University Press, 2017. 367 pages, photos, figures, sources, index. 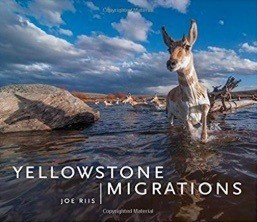 Remarkable photography by Joe Riis complemented by essays by conservation biologist Thomas Lovejoy, wildlife ecologist Arthur Middleton, and environmental journalist Emilene Ostlind describe migration in the Greater Yellowstone region by elk, mule deer, and pronghorn. These animals migrate surprisingly long distances in this region and only recently have their migration routes been known and mapped. Middleton, for instance, collected four million GPS locations for nine elk migrations ranging from the park. The Wyoming Migration Initiative has compiled GPS locations and those for routes of deer, elk, and pronghorn into vivid maps. Migration routes are threatened by growth and development and this book addresses barriers and solutions. Riis’ photography of the migrations, captured over years, is exceptional. This is a beautiful and hopeful book. Braided River, 2017. 176 pages, color photographs, maps, art image, bibliography, contributors.

Eager: The Surprising Secret Life of Beavers and Why They Matter, by Ben Goldfarb.

The history of Castor canadensis in North America is well known – the fur trade nearly exterminated the species throughout its range to satisfy the market for beaver hats. Despite this, as Goldfarb reports, this remarkable keystone species is recovering with help by many who recognize its potential to contribute to ecological restoration. Goldfarb describes many examples in North America, and some in Europe, of reintroduction of beavers and what they are accomplishing. Environmental journalist Goldfarb engagingly explains the history and natural history of the beaver and the potential and obstacles, successes and failures, of efforts to return this remarkable animal to is role in ecological processes. Chelsea Green Publishing, 2018. 286 pages, photos, notes, index.

Our Native Bees: North America’s Endangered Pollinators and the Fight to Save Them, by Paige Embry.

Non-native honey bees, important commercially for pollination of agricultural crops and the market for honey, have lately gotten lots of attention because of colony collapse disorder and other causes of mortality. Native bees get much less attention, but they do much of the pollinating across North America and are critically important to plant communities. They too are endangered by a range of environmental stresses. In this book, science writer Embry offers an overview of the biology and ecology of native bees, what is threatening them, and what is being done to preserve habitat and boost native populations. The book is written for the general reader and is beautifully illustrated with remarkable photographs. Timber Press, 2018. 224 pages, color photographs, illustrations, selected references, further reading, index.

Wild and Scenic Rivers: An American Legacy, by Tim Palmer.

Congress passed the Wild and Scenic Rivers Act in 1968 and fifty years later only 13,000 miles of the 2.9 million miles of rivers and streams in the United States have been given a measure of protection under this legislation. Writer, photographer, and river activist (for 50 years) Tim Palmer presents a historical overview of the Act and describes the rationale and management challenges it presents. He does this in the first quarter of the book, then devotes the rest to illustrating the streams that are designated part of the Wild and Scenic River System. He does this with beautiful photographs, visually reminding the reader of the values at stake. This is a celebration and call to action. Oregon State University Press, 2017. 240 pages, 160 color photographs, maps, 5 appendices, selected sources, index. 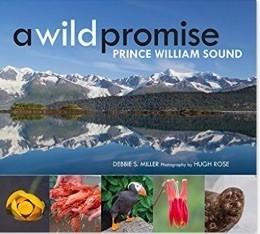 The 1980 Alaska National Interest Lands Conservation Act established the Nellie Juan – College Fiord Wilderness Study Area encompassing 2.1 million acres of the Chugach National Forest. Surrounded by Prince William Sound, home to the largest concentration of tidewater glaciers in America, a place of great biodiversity and great beauty, Debbie Miller makes the case for action on wilderness designation and Hug Rose buttresses the case with lavish photography. They make a convincing case that if any landscape in America deserves wilderness preservation, this is it. Threats to its wildness and biodiversity mount. The time for action is now. Braided River, 2018. 174 pages, essays, map, color photographs, bibliography, index.

Rising: Dispatches from the New American Shore by Elizabeth Rush.

Some may deny climate change and sea level rise, but those living on America’s coasts certainly cannot. In this moving and haunting book Elizabeth Rush, a gifted writer, takes the reader with her as she visits coastlines from Rhode Island to Miami, from New York to the Bay Area, visiting with people displaced by hurricanes and threatened by rising tides, meditating upon the choices facing plants, animals, and people living in these places. Retreat is necessary, yet retreat is blocked by development in so many places. Visiting with biologists, activists, and victims, she gives voice to many affected who usually are not heard. The core message of the book is that many will have to let go of places they love because the sea is rising, we cannot stop it, and some of us must retreat or perish. Rush delivers this dire message with deep empathy and urgency, raising many issues about greatest natural force facing us today. Milkweed Editions, 2018. 299 pages, notes.