You can’t be serious! A sexy novel about conservation biology? 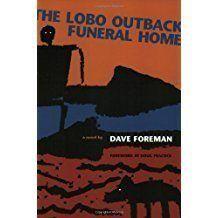 In this hard-hitting, action-packed eco-thriller, Dave Foreman writes about commitment, or, rather, about the consequences of shirking commitment. Jack Hunter, disillusioned and burned-out on conservation activism after years as a Sierra Club lobbyist, leaves Washington, D.C., for his family’s cabin in southwestern New Mexico’s Diablo National Forest, convinced there is nothing he or anyone else can do to stop humankind’s war on Nature. Nevertheless, he finds himself falling for Dr. MaryAnne McClellan, a conservation biologist who is as accomplished and tough as she is beautiful.

The leader of the Diablo Wilderness Committee, she tries to draw Hunter into the campaign to protect the area from Forest Service logging plans, and she also wants to involve him in the closely held secret that a pack of lobos—Mexican wolves—has surprisingly appeared deep in the back country. Refusing to commit to either MaryAnne or the lobos, despite the very real threats to both, Hunter is soon caught up in the bloody consequences of his cynicism, discovering the true cost of not taking a stand for what he loves.

“What Foreman also brings to this juicy sprawl of a novel is an abundance of raw autobiographical musing, testosterone and detailed accounting of the daily workings of the conservation movement….the shop-talk in Lobo is, among other things, an historical contribution, a valuable menu of what it was like to plan and strategize, of how went the mundane world of the preservation world. Where else is this sort of daily detail recorded?”—Doug Peacock from the “Foreword.”

WARNING: For mature audiences only. Attorney General John Ashcroft has determined that the racy sexual situations and graphic violence in Lobo will undermine the norms of proper society.