We just received this message from our friends at Wilderness Watch and hope you will read about the bill and take immediate action to oppose it:

I have been a wilderness activist for more than 30 years.

Never in that time has a bill been introduced—let alone pass in the House of Representatives—that would do so much harm to Wilderness. H.R. 4089, which passed the House of Representatives on April 17 not only allows destructive activities like road building, logging and ATV use that would destroy the physical characteristics of designated Wilderness, H.R. 4089 places its crosshairs on the foundational underpinnings of the Wilderness Act and its definition of Wilderness—“as an area where the earth and its community of life are untrammeled by man…retaining its primeval character and influence…which is protected and managed so as to preserve its natural conditions.” Howard Zahniser, the author of the Wilderness Act, described these words as “the definitive meaning of the concept of wilderness, its essence, its essential character.” 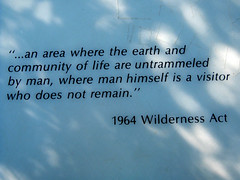 It is this essential character of wilderness that the supporters of HR 4089 seek to destroy. We have to stop them. Please send a letter today and please help us spread the word. It may well be the most important letter you will ever write on behalf of Wilderness. Thank you.

On April 17, 2012, the U.S. House of Representatives passed HR 4089, the Sportsmen’s Heritage Act, supposedly “to protect and enhance opportunities for recreational hunting, fishing, and shooting.” The bill is a thinly disguised measure to gut the 1964 Wilderness Act and protections for every unit of the National Wilderness Preservation System.

HR 4089 would give hunting, fishing, shooting, and fish and wildlife management top priority in Wilderness, rather than protecting the wilderness character and wilderness values, as is currently the case. This bill would allow endless, extensive habitat manipulations in Wilderness under the guise of “wildlife conservation” or for providing hunting, fishing, and recreational shooting experiences. It would allow the construction of roads to facilitate such uses, and would allow the construction of dams, buildings, or other structures within Wildernesses.

Specifically, section 104(e)(1) strips away the Wilderness Act’s prohibitions on the use of motorized and mechanized vehicles, motorboats and aircraft, other motorized equipment, and structures and installations for any activity related to hunting, angling, recreational shooting, or wildlife conservation. For example, this would allow for any hunter, angler, or recreational shooter to drive their ATV in Wilderness as long as they were engaged in one of these activities. While the sponsors of the bill have stated this isn’t the law’s intent, an amendment to the bill to make certain this wasn’t the result was opposed by the bill’s supporters and defeated in a House vote.

Section 104(e)(2) would waive “any requirements imposed by the Wilderness Act” for federal public land managers or state wildlife managers for any activity undertaken in the guise of wildlife management. In addition to allowing the construction of roads and unlimited use of motor vehicles and aircraft, this provision would allow any sort of wildlife habitat manipulation that managers desire to do. Logging would be allowed, for example, to create more forage for deer or elk. Reservoirs and watering holes could be bulldozed for bighorn sheep. Lakes and streams could be poisoned, and exotic fishes could be planted to provide more angling opportunities. Predator control, including aerial gunning, trapping, and poisoning would be allowed. There is literally no limit to what managers could do in Wilderness in the name of wildlife management. And if all this isn’t enough, the non-partisan Congressional Research Service points out that because Section 104(c) of the bill bars application of the National Environmental Policy Act (NEPA), none of these activities will need to undergo any environmental review for their impacts on wilderness values, wildlife, or threatened and endangered species.

The bill is backed by the Congressional Sportsmen’s Caucus, Safari Club International, and a coalition of hunting and gun-rights organizations, including the National Rifle Association. These groups are trying to rush this bill to the Senate floor for a vote. It is imperative that you contact your senator now and urge them to oppose HR 4089!

WHAT YOU CAN DO

Write or email both of your U.S. Senators, and send a copy to your U.S. Representative. Ask your Senators to oppose HR 4089 at every step of the way and to never let it pass the Senate. Contact http://www.congress.org/congressorg/directory/congdir.tt if you need help finding the email or snail mail addresses for your Senators or Representative. You may want to consider including the following points in your message:

1. OPPOSE HR 4089. It guts the Wilderness Act and strips protection from every single unit of the National Wilderness Preservation System across the country.

2. Massive human manipulations of fish, wildlife, and habitat like those allowed by HR 4089 should not be allowed in our precious Wildernesses or they will cease to be Wildernesses.

3. HR 4089 would allow roads and motor vehicles in Wilderness, and the construction of dams, buildings, and other structures with any connection to fish and wildlife.

4. Environmental review under NEPA must not be waived by HR 4089.

In 2014, will we celebrate or will we mourn the 50th Anniversary of the Wilderness Act? Please Act Today!