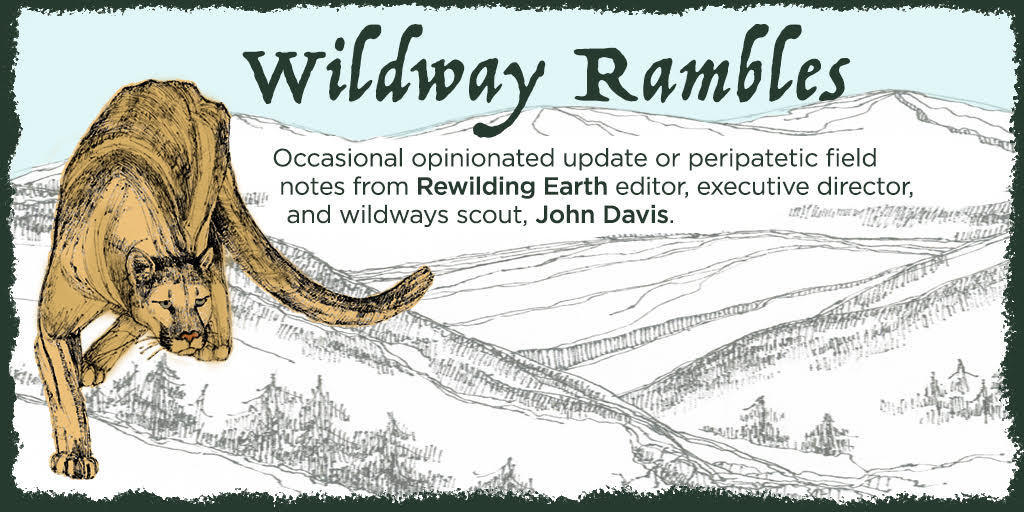 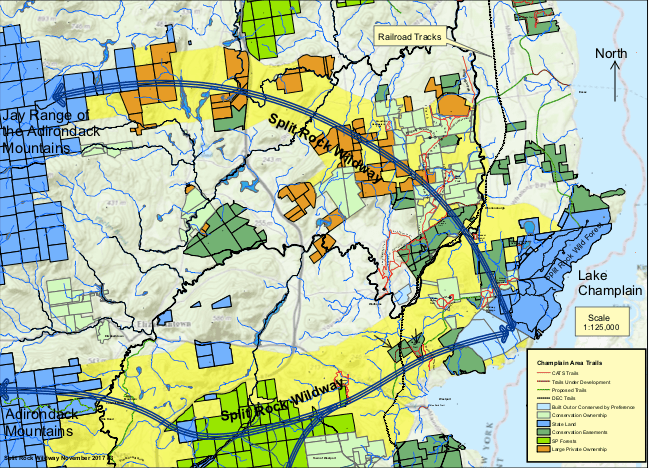 Thanks to local officials and sporting interests, as well as conservationists, the lowest dam on the Boquet River was recently removed, reopening spawning habitat for Landlocked Atlantic Salmon and other fish that depend on Lake Champlain and its tributaries. Since that dam removal about two years ago, salmon have been reported returning to historic spawning grounds on the North Branch of the Boquet River, in Split Rock Wildway. 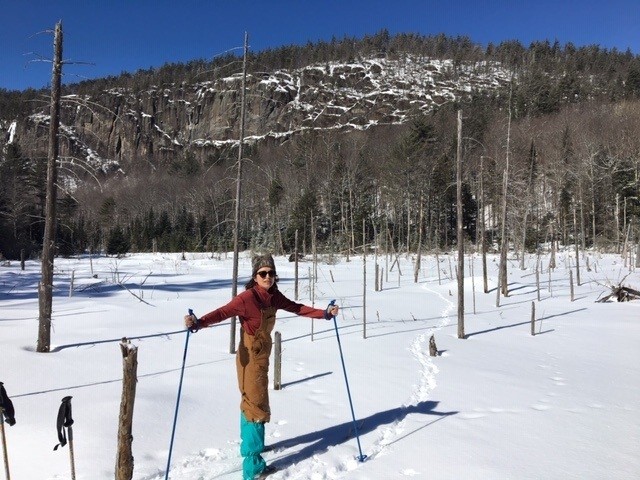 Thanks to NWT, Eddy, CATS, Adirondack Land Trust, and other partners, and in welcome contrast to much of the world, the wildlife corridor linking Lake Champlain with the Adirondack High Peaks is growing a little wilder year by year. Trackers in Split Rock Wildway trained by Susan Morse of Keeping Track commonly find prints of such focal species as Bobcat, Fisher, River Otter, Mink, and Coyote – but not yet of those much-missed top carnivores, Puma and Wolf.

Moving westward across the 6 million-acre Adirondack Park (nearly half of which now is state Forest Preserve land enjoying Forever Wild constitutional protection, thanks to heroic land-saving work by Adirondack Land Trust, Adirondack Nature Conservancy, Adirondack Council, Protect the Adirondacks, and other conservation groups), a Moose would enter the A2A connection, being championed by the Algonquin to Adirondack Collaborative . Here part of the work is identifying areas where animals are trying to cross busy roads – especially on the major east-west highways just north of the Canadian border — and convincing transportation and wildlife officials to support wildlife crossings for these places. The A2A Collaborative is also exploring the feasibility of an A2A International Scenic Trail linking the two great parks, to build support for better protection of the wildlife corridor. A2A held a highly successful biological symposium April 11, where conservation leaders discussed biological attributes and conservation priorities for this globally important habitat connection. There biologist Roland Kays gave an inspiring talk and slideshow on using wildlife cameras not only to track the movements of our wild neighbors but also to enlist more citizens, including school kids, in protecting wildlife habitat.

Despite much good land-saving work in Split Rock Wildway, A2A, the central Adirondacks, and elsewhere, the northeastern United States and southeastern Canada continue to be starved of their top carnivores, and thus suffer from over-browsing and related trophic cascades. As noted in previous Rewilding Earth reports, Puma recolonization of the East seems unlikely in the near term – given all the roads and guns between the nearest viable populations westward and the abundant potential habitat in the Adirondacks and Northern Appalachians. Eastern Coyotes, which have interbred with Gray Wolves in the Northeast and Red Wolves in the Southeast, are playing some of the role of top dog, but not nearly all of it, for they are a smaller and more opportunistic predator, only occasionally preying on White-tail Deer (more often scavenging deer carcasses, from hunters’ bullets or road-kill) and seldom taking Moose.

Rewilding efforts, though, sometimes may be most successful if they are incremental, starting with less controversial species (as Tompkins Conservation, is showing in its species reintroduction work in Ibera, Argentina). Partly for this reason, rewilding proponents in Adirondack Park are exploring the possibility of planting disease-resistant American Chestnut and American Elm trees and helping bolster Brook Trout, Landlocked Atlantic Salmon, and American Eel populations, even as they build support for Puma and Wolf reintroductions.

Great to hear about all these efforts John.