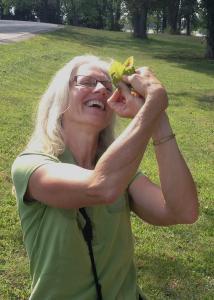 EXTRA CREDIT: Read Nancy’s wonderful article on Arc of Appalachia about her organization’s part in restoring wildness in southern Ohio.

“This was a particularly uplifting article – full of heart, full of wisdom. I’ll share with members of my board as insightful and provocative guidance in how to get conservation done.” ~David White

Nancy Stranahan serves as the Director of the Arc of Appalachia Preserve System, and was one of the non-profit’s founders in 1995. In the span of directing the organization over the last 20-plus years, Nancy has cultivated a vigorous citizen advocacy network in Ohio, what Nancy likes to refer to as a tree-roots network.

The Arc has saved and preserved over 7000 acres of natural areas in Appalachian Ohio, representing 21 preserve regions and over 100 separate real estate negotiations and fund-raising campaigns. The Arc’s headquarters, the 2500-acre Highlands Nature Sanctuary, is the Arc’s largest and oldest preserve region, and is the hub of the Arc’s primary visitor services, offering over 16 miles of public hiking trails, overnight lodges, and an interpretive Museum.

In addition, the Arc manages two long-protected earthwork sites – Fort Hill and Serpent Mound – working as a contract manager for the Ohio History Connection. Previously in her career Nancy served as Chief Naturalist for Ohio State Parks with the Ohio Dept. of Natural Resources; and operated Benevolence Café and Bakery in downtown Columbus’ city market for 20 years, where she promoted healthy and intentional food choices.