Episode 59: What Jean Ossorio Has Learned (So Far) From 530 Nights In Wolf Country 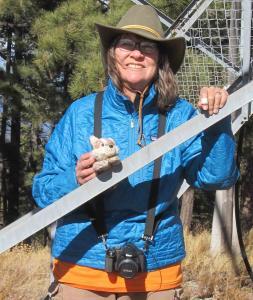 Although Jean Ossorio wasn’t actually raised by wolves, she was taken to the Missouri woods for the first time at age six weeks. Her nature-loving parents met on a field trip. During childhood she accompanied them on annual camping expeditions to New Mexico and southern Colorado, falling in love with the Southwest and its native wildlife. After her parents retired to Silver City in 1971, she and her husband and daughter spent numerous holidays and summer vacations exploring New Mexico, especially the southwestern quadrant of the state.

Jean has spent over 530 nights tent camping in the Mexican wolf recovery area since 1998, and has seen 57 Mexican wolves in the wild. She served on the stakeholder panel of the 2003 Mexican Wolf Recovery Team, on Governor Richardson’s Catron County Wolf Task Force in 2005, and as a pre-release pen sitter for the Coronado Pack in 2013. She writes occasional features for the website, “Lobos of the Southwest” (also known as mexicanwolves.org), and gives frequent public outreach programs on the Mexican gray wolf.