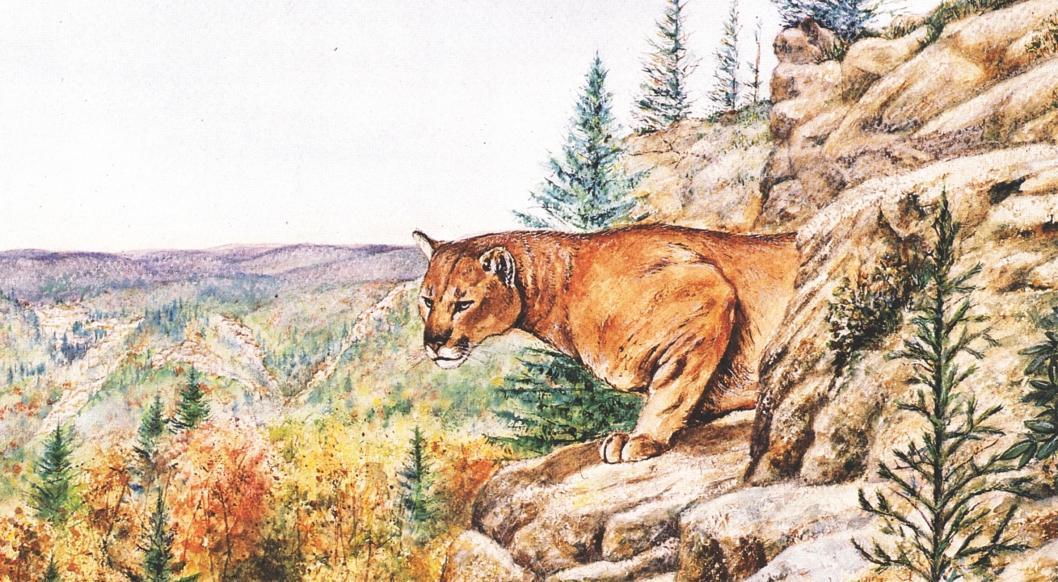 Klandagi is the Cherokee word for the puma: literally “Lord of the Forest.”The Cherokee Indians’ homeland included parts of North Carolina, Tennessee, South Carolina, and Georgia. By 1930, native pumas (AKA mountain lions, cougars, Florida panthers and 200+ indigenous names) had been eliminated from the region, as had most of the Cherokees.

One of Klandagi’s primary objectives is to explore ways of enabling non-hunting carnivore advocates to have a voice in the management of their state’s wildlife, including providing financial support for their wildlife agencies. Without such changes, it’s unlikely that potential source populations on the eastern fringe of the Rocky Mountains will be allowed to grow to the point that dispersing subadults leave —some to recolonize the Midwest and East. Nor without reform is it likely that cougars and native wolves will be reintroduced.

Thanks to Brad Basil, of ArtMedium in Elkins, West Virginia  for allowing Rewilding Earth to use his painting of a cougar on the Bear Rocks at the edge of the Dolly Sods Wilderness in northern West Virginia.  Cougars once occurred throughout West Virginia–throughout all of eastern North America.  But humans extirpated them except for a handful which survived in southern Florida, where they are now protected as Florida panthers under the Endangered Species Act.